It used to be the case that when you bought products requiring batteries, the company would include them with the item. Times changed and in a money-conserving effort, companies stopped including batteries. The comedian Brian Regan once joked that he went to buy batteries and it said on the package, batteries not included!

In Parashas Shmini, Aharon and his sons became kohanim, elevated from their prior status as Leviim. The first seven days of the mishkan’s inauguration Moshe Rabeinu performed the avodah, while Aharon and his sons watched and learned. Then it was the eighth day, opening day – to borrow a baseball expression – and (as Rashi states in 9:23) Aharon brought the korbanos but he was distressed. What was it that bothered him? He said Hashem is mad at me for the sin of the golden calf and as a result the Shechinah won’t come down. What does that mean that the Shechinah won’t come down? How do we know if it came down?


The next pasuk states, “A fire came down and consumed the korban.” We see that Aharon did not see a fire beforehand, i.e., the Shechinah did not come down. Isn’t it unusual for the Shechinah not to have come down immediately for Aharon after all his labors and his level of piety?

We know, based on the pasuk above, that the Shechinah ultimately did come down (as the fire consumed the korban). So what changed? Rashi teaches that Moshe entered the Mishkan to daven with Aharon, and then the karbanos were eaten.

In Pirkei Avos 1:2 Shimon HaTzadik taught that one of the three things for which the world was created is avodah. Avodah is simply bringing the korbanos. The Gemara teaches that prayer takes the place of korbanos. Which is greater? Rabeinu Yonah wrote that prayer has one aspect that makes it greater. Even in the time of the Beis Hamikdash, no korban existed to atone for a person who sinned intentionally. However, this individual can pray for forgiveness.

We learn another aspect of the greatness of prayer in the Rashi we mentioned above. Rav Sampson Raphael Hirsh teaches that “korban” has its root in the word “karov,” close; it brings us close to Hashem. The fire did not come down until there was a prayer. It appears that prayer is the catalyst that fueled the korbanos. We hope that the Beis Hamikdash will be rebuilt soon, and in the meantime let us use this as a great opportunity for meaningful davening. 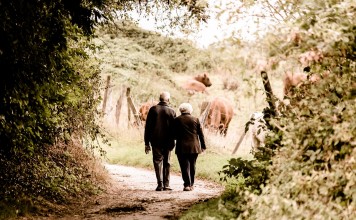