As we all know, one of the main fundamental principles of Chanukah is hoda’ah – giving thanks to Hashem. It is for this reason that Chazal instituted for us to say Hallel and add into our davening and bentching the tefillah of Al Hanisim.

There is a line in Al Hanisim that seems a bit difficult to understand, and it’s not buried somewhere in the middle – it’s in the first line. “V’al hamilchmos – and for the wars.” We thank Hashem for the milchamos – wars. War is a difficult time. There are generally causalities, pain, and suffering. Why would we give thanks to Hashem for the war?


Some Rishonim actually have a different version of the tefillah that does not include the letter a Vav. So, it reads as “al hatishuos al hamilchamos” – for the salvation from the war.

However, our version that has it with a vav begs for an explanation.

The Beis Halevi says that one who experiences a yeshuah – salvation, must thank Hashem not only for the yeshuah but for the tzara as well. This is because one would not have been able to achieve whatever one gained from the yeshuah if they had not gone through the tzara first. Based on this we can explain why we offer hoda’ah for the milchama in Al Hanisim.

The Holocaust was a dark period in our history, yet there were instances where Hashem let a bit of light shine through the darkness. I recently heard one such story that has to do with Chanukah. In the Bergen-Belsen concentration camp, there was araov named Rav Shraga Shmuel Shnitzler, known as Rav Shmelka. Rav Shmelka always gave chizuk, and encouragement to people. He would always tell the other Yidden there that a Yid never gives up.

In Kislev 1944 he told the Yidden in the barracks that he was determined to light the menorah that year. Many of them thought that was ridiculous. How in the world could anyone light a menorah in concentration camp, with no oil or menorah? But Rav Shmelka was determined and kept saying we can never give up.

In the camp, Rav Shmelka was forced by the Nazis to work in the fields. A few days before Chanukah an incredible thing happened. As he walked his foot tripped on something sticking out of the ground. When he looked at it more carefully it seemed that there was something buried there. He waited until no one was looking and bent down and uncovered it. Incredibly, it was a little package of oil. How could this be?

Then he looked closer and saw there were more things buried. There were wicks and eight little cups. It was clear that some other Yid must have hidden the menorah to use. So Rav Shmelka wrapped it back up and buried it back where he found it and went back to the barracks and began asking if it belonged to anyone.

But no one claimed it, and no one even believed that it existed. He kept watching that area, but no one went to get the menorah. At night fall of the first night of Chanukah he secretly went back there, retrieved the oil, and brought it back to the barracks, and when the guards were not looking, he and the other Yidden stood around it and lit it. They couldn’t believe it: a miracle of Chanukah here in Bergen-Belsen. And for the rest of Chanukah they lit the menorah every night.

Eventually in April of 1945 the Germans were defeated and the United States freed the prisoners. Rav Shmelka then relocated to Hungary. Sometime later he came to America and met with the Satmar Rebbe. The Satmar Rebbe had also been in Bergen-Belsen and they began talking about their days and difficulties in the camp. The Satmar Rebbe said that on the 23rd day of Kislev he was rescued, but he always felt a little bad because he had bribed a guard and he had let him bring in a menorah and some oil, but it was never used.

When Rav Shmelka heard this his mouth dropped open and he excitedly said, Rebbe, rebbe your menorah and oil were used! He told him the whole story and told him that you can’t imagine how much chizuk you gave people without even realizing it. The Satmar Rebbe sat back smiled and realized that once again Hashem performed a miracle with oil in the month of Kislev.

Chanukah is a time to give hodah to Hashem, both for the yeshuos that Hashem has delivered for us, and for the trials and tribulations that we suffered in order to be zocheh to the yeshuah. Standing here today more than 70 years after the churban of Europe we have so much to be thankful for. Both in ruchniyus and gashmiyus Hashem has elevated His nation from the ashes in just 70 years. Look at where we are today. This awareness is sure to bring one to love Hashem.

May we bezocheh to rejoice in the geulah sheleima and the chaunkas Beis Hashlishi, amen. 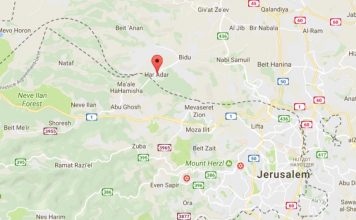