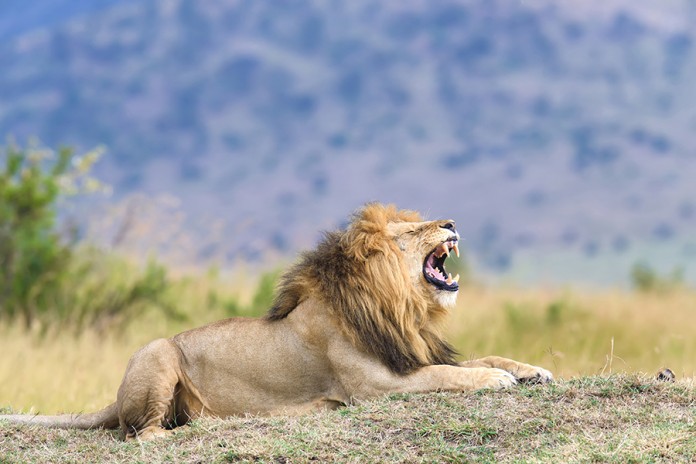 Rashi explains that when the Jewish people awaken from their sleep they exhibit the energy and vitality of a lion in seizing mitzvos – putting on a tallis and tefillin and reciting brachos and the Krias Shema. They display an enthusiasm immediately at the start of the day to fulfill the first mitzvos of the morning.

They are like children who run in all directions to grab the bags that are all over the floor after the bags of candies have been thrown at an aufruf. Their success is measured by the number of bags they have been able to collect.

Rav Krellenstein questions whether this is proper chinuch. However, this practice is more easily understood in the context of our text. If the child does not “grab” the bags for himself, another child will get them. It is interesting to note that the Talmud (Eruvin 54a) uses a similar expression with regard to Torah study and the performance of mitzvos. “Shmuel said to his student, R’ Yehuda: Grab and eat! Grab and drink! The world that we are passing through is like a wedding.” One must grab with alacrity his opportunities for spiritual growth because this world is like a celebration that is over in a few hours. If one doesn’t seize the moment, someone else will take advantage of the available prospects.

Mindful of the threat of the yetzer hara, which seeks to rob them of the mitzvah if possible, the Jewish nation acts promptly and swiftly to “grab” the mitzvos for themselves.

Writing about the element of alacrity in the performance of a mitzvah (Mesilas Yesharim, Chapter 7), R’ Moshe Chaim Luzzatto notes that the yearning of the heart is what is most desirable for the service of Hashem. He suggests that one who does not have that fervor and passion within him should nevertheless act with great enthusiasm and zeal to do the mitzvos, because the external arouses the internal. The Talmud (Brachos 6:3) notes that when one enters a synagogue it is a mitzvah to run, as it says (Hoshe’a 6:3), “And let us know, let us pursue the knowledge of Hashem.” Later on (11:10), it says, “They should follow Hashem like a roaring lion,” and R’ Yechezkel Sarno comments that by physically running after Hashem with the performance of mitzvos the individual will eventually develop a strong connection with Hashem.

R’ Moshe Chaim Luzzatto notes further in his sefer (Chapter 16) that the true service of Hashem requires much more purification than do gold or silver, i.e., purity entails performing a mitzvah as it was originally intended to be done, as it says (Tehillim 12:7), “The words of Hashem are pure words, as silver purified in a crucible upon the earth, refined sevenfold.” He cites the Talmud (Shabbos 63a) that whoever performs a mitzvah as it was meant to be done will never receive evil tidings.”

R’ Dovid Povarsky, rosh yeshiva of Ponevezh Yeshiva (1902-1999) would always come to yeshiva very early. In his later years he required regular assistance. He once asked his companion to come even earlier than usual. When the gabbai commented on this, R’ Dovid answered, “It is cloudy outside. If I don’t hurry and leave immediately, then you will tell me that I cannot go out because it’s raining.”

Many years earlier, Bnei Brak was an area with many fields and orchards where shepherds would herd their flocks. One beautiful day, when the great Gaon HaRav Shach was walking through the fields accompanied by his disciples, they happened to pass an elderly shepherd playing a pleasant tune on his flute in the cool breeze as he tended the goats grazing on the grass nearby.

From that day onward, R’ Shach would stop to inquire after the shepherd’s welfare. Everyone in Bnei Brak knew Rav Shach and was aware of the tzaddik’s holiness, and the lonely man was overjoyed and touched that so great an individual cared about his wellbeing.

One day Rav Shach did not see the elderly shepherd. When he asked around, he was told that the shepherd had died the night before. The rosh yeshiva was deeply pained and asked about the details of the levaya, but no one seemed to have any information. Concerned that the shepherd was in fact a mes mitzvah (a dead person with no one to bury him), the rosh yeshiva, with great devotion and urgency, began making all the proper arrangements for the shepherd’s proper burial. Rav Povarsky then walked through the entire neighborhood asking people to participate in this important mitzvah. The Gaon’s personal attention to detail and his commitment to giving the shepherd his final respects (kavod acharon) were a perfect illustration of zealousness to properly perform Hashem’s commandments.

The Pele Yoetz elaborates and says that when an individual acts expeditiously and speedily, demonstrating a love for the mitzvah, the Evil Inclination is not able to initiate its machinations to possibly thwart the performance of the mitzvah. In order to suppress the Evil Inclination on other occasions, the Pele Yoetz makes the suggestion that if one is traveling he should take along the items he will need to perform certain mitzvos even though it is unlikely that those items will not be available when he arrives at his destination.