Sometimes we can clearly understand the words of Chazal, k’shmo kein hu, the way it sounds is the way it is. Just hearing the words Shabbos Nachamu fosters a certain feeling of relief. And we are indeed bidden to feel a special comfort on this Shabbos. Perhaps this is why the collective soul of Klal Yisrael has a greater desire to “get away” and hotels are filled with special programs.

Rav Avrohom Kluger in his Sefer Nezer Yisrael tells the story of a gadol who paid a shiva call to a family who lost a child in a terrible auto accident. Besides the grieving parents, there were many older siblings sitting shiva in the home and all week they had been discussing what they should accept upon themselves, what they should be mekabel in their avodas Hashem as a result of this tragedy. They asked the rav what he thought.


“I’ll tell you exactly what HaKadosh Baruch Hu wants you to be mekabel,” the rav said. “He wants you to be mekabel tanchumin! Don’t think it so easy to simply move on after a tragedy. Taking comfort and consolation, being mekabel tanchumin, is a great avodah like all other aspects of avodas Hashem. Before anything else, work hard at being consoled!”

In this context, let us discuss Shabbos and a recent popular song about Shabbos.

If you are familiar with contemporary Jewish music, and have been to some weddings lately, you know these words quite well.  The song was released by Shmueli Ungar around eighteen months ago and has become a crowd favorite.

But what does Shabbos have to do with a wedding, you might ask? Is it just the song’s popularity or is there any real connection?

We shall return to this question.

The first part of the song comes from the zemer on Friday night, Kol Mekadesh – “U’veyom HaShabbos sisu vesimchu k’mekablei matan nachliel, on the day of Shabbos rejoice like those people who received the Torah.” (The astute and older Jewish music aficionado will recognize these words from a 1980’s MBD song.)

Why should we rejoice on Shabbos like those who received the Torah?

One basic explanation is that the Torah was given on Shabbos (Shabbos 86b). In addition, the Siddur Beis Yaakov from Rav Yaakov Emden says it means we should primarily rejoice in the spiritual aspects of Shabbos and not merely the gastronomical delights.

The Shem Mishmuel (Vayakhel) writes that it alludes to Klal Yisrael’s level at Matan Torah which we can once again attain, in some way, on Shabbos. The Ohr Gedalyahu (Shemos, page 151) quotes Pirkei D’Rebbi Eliezer which states that on every Shabbos, Moshe Rabbeinu, who after cheit haeigel had removed the crowns we received at Matan Torah, returns them to Klal Yisrael. This is what is meant by our receiving a neshama yeseira. Shabbos is a day that really exists in the next world, but we are given a taste of it in this world. On Shabbos, we return to the level we were on before the sin of the golden calf, on the level of the first Luchos, utilizing our neshama yeseira. This is why the Ribbono Shel Olam juxtaposes the pesukim (in Parshas Ki Sisa) of Shabbos near the description of Moshe receiving the perfect Luchos rishonos.

Rav Boruch of Mezhbezh says that sisu v’simchu k’mekablei matan nachliel, is not a reference to Matan Torah, rather it is that we are to feel so energized and uplifted by the sanctity of Shabbos that we feel as though we are in the Beis HaMikdash. The author of the zemer is saying that we yearn for the Beis HaMikdash and know that the ultimate redemption is not yet at hand, but Shabbos gives us strength and comfort. On Shabbos, to some extent, we must try to consider as if we have received the ultimate gift from Hashem, the Yemos HaMoshiach and Olam Habah, the matan nachliel.

Now for the Shabbos and wedding connection.

Think of a mitzvah tantz. The tzaddik, the rebbe, holds a very long piece of fabric whose other end is held by the kallah. The kallah’s face is fully covered and she stands almost motionless. The rebbe dances and has in mind Klal Yisrael’s inner desires to bind themselves to HaKadosh Baruch Hu.

There are many midrashim regarding Maamad Har Sinai which refer to it as a chuppah between Hakadosh Baruch Hu and Klal Yisrael. In fact, the Tashbeitz (Katan, Siman 467) writes that almost all customs we practice at a wedding are derived from Maamad Har Sinai. (See Minhag Yisrael Torah, Volume 4 on Nisu’in, page 169.) The mitzvah tantz is part of this idea as every chassan and kallah who live happily bring more Shechinah into the world. Hence, more closeness in the marriage between Hashem and Klal Yisrael is achieved, which began at Har Sinai.

Minhag Yisrael Torah (ibid. page 218) explains that saying the word Shabbos instills fear into people and helps them avoid sin. At a wedding there can be too much frivolity and this practice reminds people to remain in control. This is similar to the Gemara (Berachos 30b) which notes that when Mar, the son of Ravina, made a wedding for his son, he broke an expensive glass when the guests became overly carefree and jovial, thus tempering their happiness so they would avoid transgression.

I once heard a different explanation. During the mitzvah tantz, the Rebbe is thinking and praying for the young couple. All those present are supposed to do the same. They are all davening that the couple always live a life of Shabbos, a life focused on the Shechinah, on bringing more and more of Hashem’s Presence into the world with their actions. We are praying that the couple tastes the true inner world of Shabbos. Shabbos is a day of eternity, of Olam Habah, when the spiritual pleasures will never cease. There are no deadlines or time constraints on Shabbos and in Olam Habah. We daven that the couple love and appreciate each other in a “Shabbosdiker” way, always enjoying each other’s company, always finding meaning in their lives together. 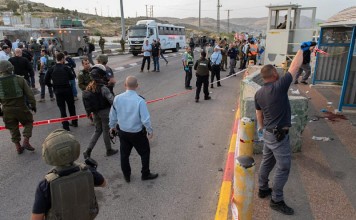