After the curses and before the speech in Netzavim, the very end of this week’s parsha (Devarim 29:1-8) might easily be overlooked as just a formal transition. One clue that it is not merely a transition is the peculiar mention (6-7) of the war with Sichon and Og and their territory being given to Gad, Reuven and Menashe. It is peculiar because no other specific historical event is mentioned in this otherwise very general description of what has happened to the Jews since they were in Egypt.

Rabbenu Bachya gives a plausible reason for these two verses: The Jews are about to fight against the Canaanites, and Moshe senses that they may still need encouragement for the difficult and lengthy process ahead. Hence he shows them that the process has already begun and has been much easier than they might have thought. Sichon and Og were among the most powerful Canaanite kings (even if they were ruling kingdoms outside of Canaan proper) and were easily routed. The result was quick and easy apportionment of their land. There can be almost nothing that will allay one’s fears as much as beginning the challenge and finding that one’s worries were unfounded.


While the above is a likely explanation, it does not answer why Moshe says it specifically at this point in Moshe’s concluding speeches at the end of the book. Especially given the very synoptic nature of this section, it would not seem to be the best candidate for the otherwise helpful and important message suggested by Rabbenu Bachya.

For that reason, Netziv gives a different explanation that explains the entire section as a way to console the Jews about the curses that had just been hung over their head. The main gist of the consolation was that whatever comes to the Jewish people from God – even the execution of curses – would ultmately be for the good. And one of the best illustrations of that is the battle against Og and Sichon. For had the spies not stopped the Jews in their tracks, they would not have gone the long way around to get to Israel and crossed paths with these two kings. Hence Moshe is giving a concrete and easily understood example of when something perceived as bad – meaning the requirement of a longer and harder path that resulted from the sin of the spies – could turn into something good.

However Netziv points out that there is actually a hint to a more difficult message here as well. For just as one should not think that what appears bad is not actually good, so should one not think that what appears good is necessarily not bad. That, says Netziv, is hinted to by the inheritance of these lands by the three tribes mentioned above. Had the Jews gone straight into the land and not fought with Og and Sichon, these tribes would have found their rightful place together on the western side of the Jordan. That they didn’t led to their early exile, caused by this very land – which did not fully share in the elevated spiritual properties of the Land of Israel proper – that became their home.

In this regard Moshe’s consolation is a double-edged sword. If the message is “do not be overly upset about what you see as a tragedy,” it also teaches not to get carried away with what you see as reason for celebration.

And yet both mourning and celebration – both personal and national – are built into how Jews are supposed to live their lives according to the Shulchan Arukh. Indeed, we must express natural feelings at what we see in the short term. It is not only natural, but also appropriate to respond as a human being – living in the present – is inclined to respond. However it is equally appropriate – if more difficult and less natural – to be aware of our limited understanding of the long term consequences of events. 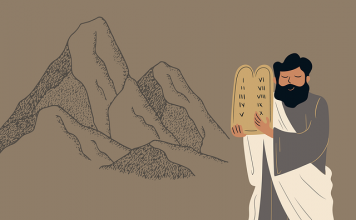 At the Foot of the Mountain – Pull Up a Chair [audio]