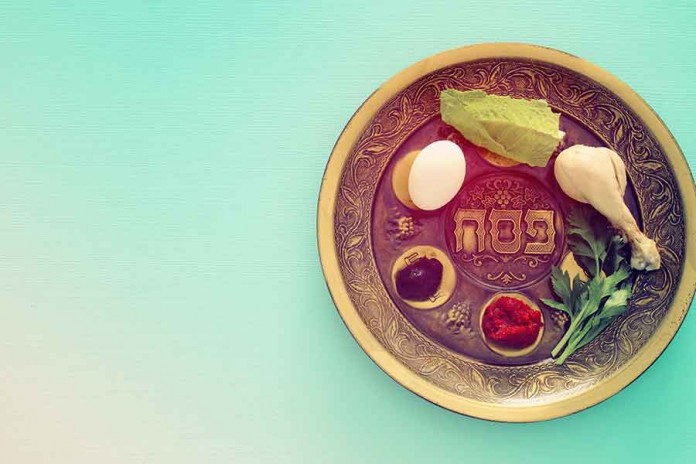 Before the Seder begins, we review the order of the night’s rituals (simanei haseder). The reason we do this, according to the great Torah ethicists, is to demonstrate the importance of order in one’s life. Our Sages stress the significance of knowing when and how things are meant to be done in consonance with the Torah perspective. Certainly, the Pesach Seder needs to be conducted in the context and frame of reference of the Torah in order to best capitalize on the opportunities for holiness that are offered on Pesach night.

Our Sages explain that the first step is kaddesh (the Kiddush), which our Sages define to mean that we make ourselves holy. This is followed by urechatz (washing the hands), or purifying ourselves.


It is often asked what the first step should be in order to come closer to Hashem. Should one first purify himself by abandoning his evil ways, or should he engage in acts of holiness – in mitzvos and charitable acts?

Dovid HaMelech states (Tehillim 34:15), “Turn from evil and do good,” which would seem to suggest that before one engages in his pursuit of holiness, he needs to discontinue his corrupt conduct. Our Sages tell us that trying to achieve holiness while still spiritually impure is like “immersing in pure waters with an impure creature in his hand.” As long as one is in possession of the source of impurity, he will not become pure no matter how holy the waters and how many times he immerses.

Yet, when the great Gaon HaRav Moshe Feinstein, zt”l, was asked this question, he answered that it is much easier to engage in the pursuit of holiness and kedusha than to cleanse oneself of his impurities. Therefore, we advise those seeking to come closer to Hashem to focus on their sanctification first. The great R’ Pinchas of Koritz was also of the opinion that the pursuit of mitzvos would be advantageous in helping to remove the evil.

The holy books attribute this divergence of opinion to the dispute of Bais Shammai and Bais Hillel. Shammai, whose soul was rooted in gevurah (strength and discipline) opined that man’s fundamental avodah was to turn away from evil; Hillel, whose soul was rooted in chesed (loving-kindness) was of the opinion that man’s fundamental avodah was to do good. Sifrei Chassidus discuss the thinking as to why the pursuit of holiness should precede abandoning sin, and conclude that it is in line with the well-known proverb, “A little bit of light pushes away much darkness.”

In today’s generation there is much spiritual growth, Torah study is flourishing and the observance of mitzvos is steadily increasing. Many disenfranchised Jews are finding their way back. We must intensify our outreach efforts so that more people can be brought closer to Hashem and His Torah.

A distraught couple came to seek my guidance and advice with regard to the spiritual decline of their son. At one point, I inquired whether they had checked the tefillin and mezuzos of their home.

Astonished, they told me that they had just recently been in Eretz Yisroel. They had visited one of the Torah sages who told them to do everything they could to get their son to wear his tefillin. The couple was taken aback, and related that their son was so deeply enmeshed in sin that they could not see how putting on tefillin would help. The sage explained that the mitzvah of tefillin was so powerful that it could even sway someone who had become disassociated from Judaism to perform mitzvos and eventually lead him back to the proper path in life.

As the boy continued to don his tefillin every morning, his return to Yiddishkeit gained momentum, as it says (Avos 4:2), “One mitzvah leads to another mitzvah.”

One Friday night, as a group of seminary girls sat in the home of a chassid of the Toldos Aharon in Yerushalayim, they were amazed to see their hostess enter the living room in a wedding gown to light the Shabbos candles. After concluding her prayers, she turned around and, noting their shocked expressions, related the following:

“I was born to irreligious parents and received a secular education. There were some religious teachers, but the school had a strict policy that they could not teach anything related to religion, nor could they take any of the girls to their homes for Shabbos. The school was not interested in encouraging any observance of the mitzvos.

“Despite the possibility that she could lose her job, one of the teachers did once take me home for Shabbos. When I saw her lighting her Shabbos candles, I was very moved. That was my only exposure to Yiddishkeit growing up, and eventually I met a non-Jew to whom I became engaged.

“The wedding was scheduled for a Friday night. As I was being driven to my wedding that Friday night, the car stopped at a red light. A group of religious girls who looked lost asked if I knew where a certain bait knesset was in that area. They were surprised when I actually knew where it was, and I explained to them that when I was younger I had attended school in that building, which subsequently was sold and became a bait knesset.

“The girls were curious about my wedding gown, and I told them that I was on my way to be married. One of the girls said, ‘Oh, you must come with us. Our custom is that before one gets married, the bride must get a blessing from the Rav.

“I was a little emotional and I thought it would not be a bad idea if I would receive a blessing, so I agreed to accompany the girls.

“Unbeknownst to me, two of the girls ran ahead to advise the Rebbetzin of the situation. When I came into the Rav, he insisted that I should first have Kiddush and partake of some food, and then he would give me his bracha.

“I was overwhelmed by the warmth of the girls and the acceptance of the Rav who was willing to give me a bracha even though I was marrying a non-Jew. I sent a message with the driver that I had been delayed, and we would meet up a little later.

“The young man was so angry that he immediately broke off our relationship and would have nothing to do with me.

“Slowly, very gradually, I began to return to the path of Judaism, to the embrace of my Father in Heaven. A number of years later, with the blessing of this Rav, I married my husband.

“Since I had been wearing this very wedding gown on that Friday night when I began my return journey to Yiddishkeit, and my introduction to Judaism was the lighting of the Shabbos candles in the home of that teacher, I have the custom to wear this wedding gown every Friday night for candle-lighting.”