Just like that, we’ve come to the fourth haftara of consolation, more than halfway on our journey from degradation to acclamation. In this week’s haftara, the navi Yeshayahu speaks of the rectification of the physical world that accompanies our redemption. All of the barriers are dissolving; the laws of nature and of history are suspended so that Hashem can return His people as He had promised.

The Ishbitzer Rebbe, in his masterful Mei HaShiloach, deals frequently with the psychology of spirituality, using Torah as a tool for achieving self-awareness and moral growth. In our haftara he sees a confrontation between spiritual transcendence and a more mundane, temporal consciousness. Hashem speaks to the prophet – or is He speaking to us? – saying, “I will place my words in your mouth, but with the shadow of my hand I will cover you” (Yesh. 51:16). This covering is understood by the Targum and the Metzuda, among others, as a form of protection, a shielding of our eyes as a parent might do for a frightened small child. But the Mei HaShiloach understands that what is being described is concealment juxtaposed with revelation. Hashem’s word is in our mouths but His hand is covering our eyes.


The Ishbitzer teaches that everyone comes into this world with Torah in his heart, cloaked in a disguise. We all have some special lesson to impart, some perspective that is uniquely our own, but is the opposite of what is readily apparent in our nature. Every individual, if she wishes to transform the world with her own spiritual voice, must first overcome the disguises in which her essence is wrapped. Hashem does this, the Ishbitzer teaches, to make us work hard to make the world a better place. We must work harder on ourselves in order to be the best people that we are each meant to be. By finding the true essence hidden inside ourselves, we learn to bring out the best in others and to bring about the best in everything.

The navi goes on to say, “The voices of your lookouts should raise their voices together and rejoice” (Yesh. 52:8). The meaning of the word translated as lookouts in this context is unclear; our translation follows Rashi. The Hebrew word meaning “to look out” in our verse can also mean to anticipate. This is how it is understood by the Mei HaShiloach. There are those who live in this world fearing the worst because they can’t see beyond the natural order of things. They see the direction that historical events seem to be leading towards, and they feel dread in their hearts in spite of their faith in G-d.

Hashem will heal the spirits of these unfortunate ones as they realize that the promised redemption is occurring in front of their mortal eyes. They will rejoice when they see the wonder reflected in one another’s faces. “One eye will see another as Hashem returns to Zion” (Ibid.).

What they see in one other that causes such joy is that Hashem does not only redeem the collective, He does not only act in history – but He acts for each and every individual. With the coming redemption, Hashem saves all of us, and He also saves each of us. 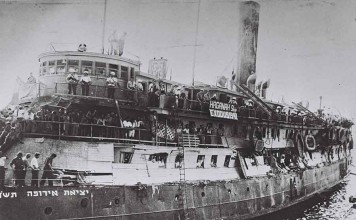