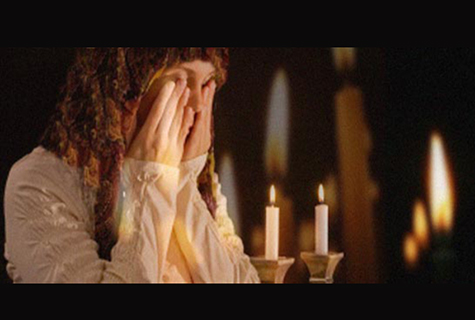 One of the most emotional moments of the week is definitely when the Jewish woman lights the “Shabbos licht” – the Shabbos candles. Many of us have vivid pictures in our mind of our mother or grandmother gracefully waving her hands, covering her eyes and reciting the brachos with feeling. The tears would flow unabashedly down her cheeks as she poured her heart out to Hashem for her husband, children, health, parnassah, and of course Moshiach.

Even those barely affiliated with Yiddishkeit feel a warm connection to this mitzvah. I saw this recently when I was flying to America for a family simcha. I asked my parents what I could bring for them and they answered that some special 6-hour neironim candles (the type that melt in the glass cup) would be fine. Excited that I had something to bring, I bought three boxes. But to my dismay, when I packed my bags, I realized that they were very overweight. But my wife advised: “Your parents asked for them – try to bring them!” So I took them along and hoped for the best. When I placed my suitcase on the scale, the El Al agent firmly shook her head and I realized that the candles would not be making their way to LA. Noticing that the agent was not religious (yet), I asked her: “If I give you a box of candles will you light them each erev Shabbos?” She excitedly said yes. I then turned to two other agents standing nearby and asked them the same question and was pleasantly surprised by their warm response! As I boarded the plane to the “City of Angels,” I couldn’t forget those “lost angels” back in Israel, who were so happy to ignite the flames of Shabbos in their homes.


This got me thinking: Why is it that someone who does not keep the laws of Shabbos is so excited to light Shabbos candles? And why is it such a special time for all of us?

The Menorah in Our Homes

Let us begin with a fascinating medrash (Yalkut Shemoni) in the beginning of this week’s sidrah, Behalosecha. Hashem tells Klal Yisroel: “If you keep the neiros of Shabbos I will show you the neiros of Tzion… and you will not need the light of the sun anymore, as I Myself will illuminate for you… and all this will be in the merit of the neiros that you light each Shabbos.” We see from here that if we are scrupulous with the fulfillment of this mitzvah we will merit unbelievable reward in the times of Moshiach.

Why is this so?

Rav Pinkus zt”l would say (Nefesh Shimshon Shabbos, page 48 in the Hebrew version) that there are many correlations between the Bais HaMikdash and Shabbos. One of them is that just as in the Bais HaMikdash there was a mitzvah to light the menorah, so too we have a mitzvah to light the Shabbos candlesticks. And just as in the Bais HaMikdash there were two separate mitzvos – to set up the wicks and oil and afterwards to light them – so too before Shabbos the husband sets up the candles (see Mishneh Berurah 263:12) and the wife lights them. (The obligation to light Shabbos neiros does not fall only on women – men are equally obligated. But when a man is married, his wife is the one who actually performs the mitzvah. Setting up the neiros is the way the married man takes an active part in the mitzvah.)

We can explain this connection with a Gemara (Shabbos 22b). The ner hama’aravi, the lamp in the menorah of the Mikdash that never went out, was testimony that Hashem caused His presence to dwell in Klal Yisroel. This means that by lighting the menorah we demonstrate that Hashem is with us. The same is true with the neiros of Shabbos. Poskim tell us that one of the reasons why this mitzvah was established was for Kavod Shabbos – honoring the Shabbos. The simple understanding is that without lighting candles we would literally be “left in the dark.” A meal eaten in the dark is not very honorable, to say the least. But, even now that we all have bright electric lights, there is still a mitzvah to light neiros. That is because one cannot compare the majestic aura of a candlelit banquet to the atmosphere of a meal eaten in a fast-food joint. Lighting candles demonstrates that the Shabbos meal is a banquet and that we have a special guest in our home on Shabbos: the King of the Universe.