Jerusalem has no strategic significance. It has no commercial or industrial importance, and it is not a cultural center.

How has this ancient city, unimportant as it appears, crept to the heart of contention between Israel and the Palestinians over the future of the land of Israel? Why should we care what happens to Jerusalem?

We need to begin by understanding the importance of memory. Memory isn’t history or dead memorabilia. By defining the past memory creates the present. Repression of memory creates mental disease. Health comes from memory’s recovery. Dictators consolidate power by altering memory. Stalin airbrushed Trotsky and Bukharin out of photographs. Revisionists deny the Holocaust ever happened. Why does it matter?

In Hebrew, the word for man is “zachar.” The word for memory is “zecher.” Man is memory. People who suffer memory loss through illness or accident don’t just misplace their keys. They lose their selves. They become lost and adrift in time, because without memory, the current moment has no context, and no meaning.

The memory of Jerusalem somehow is linked to our current vigor as a people.

London comes from a Celtic word which means “a wild and wooded town.” Cairo is an anglicized version of the Arab name for Mars, the Roman god of war. Paris is named for the Paris of Greek myth, who was asked by the gods to choose between love, wisdom, and power. He chose love ― the love of Helen of Troy.

Jerusalem was the place of Abraham’s sacrifice of Isaac, and Abraham said of Jerusalem, “This is the place where God is seen.”

Elsewhere, God is a theory, but in Jerusalem, God is seen, and felt, as a tangible presence. In Jerusalem we reach beyond the frailty and vulnerability of our lives, and we sense and strive for transcendence. Elsewhere we grope for insight. In Jerusalem we anticipate clarity. Paris may be for lovers, but Jerusalem is for visionaries.

In Jerusalem, God is seen, and felt, as a tangible presence.

Jerusalem is a metaphor for a perfected world, and it gives us perspective on our lives. When Aldous Huxley said, “we have each of us our Jerusalem,” he meant much more than a temporal city of taxi cabs and traffic jams. He meant a vision of what life might be.

The vision of life’s promise is one we surrender at our peril, because it gives us the will to live. In exile for two thousand years Jews said “Next year in Jerusalem,” and amidst poverty and oppression they preserved the dream of a world in which love and justice, not power and self-interest, would be the currency men live by.

The Talmud says that creation began in Jerusalem, and the world radiated outward from this place. Medieval maps show Jerusalem at the epicenter of Asia, Europe, and Africa. The world flows into this spot, and all life’s forces resonate here. From this place, the whole world is cast into perspective.

Once the Temple Mount was the highest point in the city of Jerusalem, but in the year 135, Roman slaves carried away the dirt of the mountain, and turned it into the valley we now look down on from the Old City. The Romans expelled Jews from Jerusalem and barred them from reentering on pain of death. Jewish life, they proclaimed, has now ended.

The Crusaders rewrote Jerusalem’s importance, the center no longer of Jewish national drama, but the site of the passion and death of Jesus. Like the Romans they expelled Jews, and destroyed synagogues.

The Muslims came after, and as those before them rewrote the memory of Jerusalem, expelling Jews and Christian. They systematically built mosques on every Jewish holy site. They airbrushed the past.

In rewriting the history of Jerusalem each of these cultures rewrote our place, the Jewish place, in history. They consigned us, they believed, to the dust bin of history ― a once great people, now abandoned by God; bypassed by time.

In Jerusalem, each culture rewrote the Jewish place in history.

But Jews preserved Jerusalem as a memory. When we built our houses we left a square unplastered, and we broke a glass at weddings in memory of Jerusalem. From all over the world we turned and prayed toward Jerusalem, and because memory was kept alive, the Jewish people lived.

When Jerusalem was liberated, time was conflated. The past became present. What we had longed for became ours. What we had dreamed of became real, and soldiers wept because an adolescent Mediterranean country suddenly recovered a memory lost for 2000 years. The past was instantly present, incredibly, transcendentally, transforming who we knew ourselves to be.

Who are we? We are not despised and impoverished itinerants, surviving on the fickle goodwill of other nations. We are not a nation of farmers recovering swamps, nor of warriors ― though when we need to be we are all these things.

We are a nation of priests and of prophets, a light unto mankind. We taught the world “to beat their swords into plowshares,” “to love your neighbor as yourself,” equality before justice, and that admiration belongs not to the rich and powerful, but to the good, the wise, and the kind. Hitler said, “The Jews have inflicted two wounds on humanity: Circumcision on the body and conscience on the soul.” How right he was and how much more we have to do. How tragic when we fail ourselves.

Already divided by language, by geography, and even by religion, our people is bound only by threads of memory and of hope. These threads are exquisitely fragile. If they sever we will fragment, and the long and bitter exile of our people ― not yet fully ended, is consequence, says the Talmud, of the dissensions which sunder us from one another.

To this threat, Jerusalem provides counterpoint, for Jerusalem embodies our memories and hopes. Jerusalem is a living memory, a vision of God in our lives, an image of a perfected world. Jerusalem gives us the strength to achieve what we as a people must do, to unite ourselves, and to sanctify this world.

This is why Jerusalem matters. 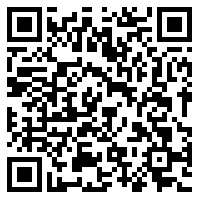