Listen to warnings about dangerously inadequate US synagogue and Jewish community facilities security by American and Israel security experts, Dr. Stephen Bryen and Razi Atuar in this Israel News Talk Radio-Beyond the Matrix by Rod Reuven Dovid Bryant and Jerry Gordon. They cite the lack of situational awareness training, CCTV software and lockdown procedures. Dr. Bryen presented startling information that the Squirrel Hill area in Pittsburgh had more than 50 Anti-Semitic incidents in the run up to the Shabbat massacre that took the lives of 11 Jews ranging in age from 54 to 97, the latter a holocaust survivor. The apprehended killer, Robert Bowers, Bryen noted was not barred from entry and killed Jewish victims, including those who hid in closets. Bryen co-authored a 2017 jns.org article with Andrew Postulou, “American Jews need to make security central to communal work. “The article discussed the unarmed British community Shomrim- “watchers” program as a model for the American Jewish community. The Shomrim worked in cooperation with London’s Metropolitan Police to foil attacks on synagogues, schools and community programs. He underlined the importance of deterrence with armed guards and where feasible police patrols. Bryen noted that funds for developing synagogue security programs are currently available from FEMA USDHS for nonprofit security. Dr Stephen Bryen has more than 40 years of experience in Congressional and government service. During the Reagan Administration he was the U.S. deputy undersecretary of defense for trade security policy and the founding director of the Defense Technology Security Administration, defense technology CEO, NGO leader, whose articles appear in American Thinker, Jewish Policy Center inSight and the Asia Times. His latest book is “Technology Security and National Power: Winners and Losers” (Transaction Publishers)

Razi Atuar, CEO of a startup technology company, Zotagroup outlined his experience as a former Lt. commander of an IDF special operations brigade, Israel Secret Service and diplomatic security specialist. He emphasized the importance of situational awareness training, physical measures to bar entry of intruders and allow for entry of authorized persons and the latest generation of CCTV cameras and software that can alert both synagogue monitors and local police and the location of congregants with cell phones during lockdown. Like Bryen he indicated that trained armed private guards and police represent the best deterrent. 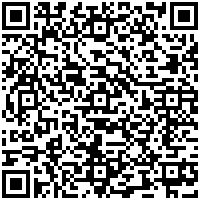