Interview with Award-Winning Journalist, Senior Editor-in Chief at the Jewish News Syndicate, Jonathan Tobin, to discuss his recent columns, including on the Biden Administration abandoning Israel on a crucial UN vote on the UNRWA support for the Palestinians, from a column titled:

Biden’s neutrality on infrastructure of the war against Israel
A U.S. abstention on a resolution supporting the UNRWA refugee agency that fuels Palestinian demands for a “right of return” demonstrates the administration’s misunderstanding of why the conflict continues.


We also discussed the recent trip to Israel organized by the far left anti-Israel J Street – bringing Democrat members (only) of Congress to meet with Israeli leaders, while indoctrinating them even more in support of the Palestinian narrative. Congressional members on the trip included Barbara Lee CA-13, Mark Pocan WI-2, and Jamaal Bowman NY-16, all of whom have horrific records on Israel.

Jonathan discussed the further lurch left by the ADL who has voiced support for Critical Race Theory, which would lead to further antisemitism from ideological progressives.

Lastly, we talked about AIPAC, and whether they can still be relevant as a pro-Israel bipartisan group when bipartisanship is fading away in Washington. 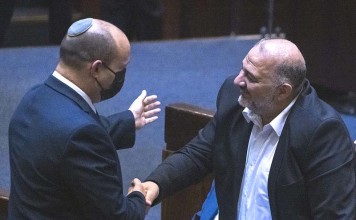