Democratic Congresswoman (D-NY) Alexandria Ocasio-Cortez slammed President Joe Biden this week for his statement that Israel has a right to defend itself when “thousands of rockets are flying over the border into your territory.”

AOC, as she is known, accused Biden of “taking the side of the occupation” – as Israel is called by anti-Semites and those who support the Boycott, Divest and Sanctions (BDS) economic war on Israel – in a tweet on Wednesday.


“Blanket statements like these w/ little context or acknowledgement of what precipitated this cycle of violence — namely, the expulsions of Palestinians and attacks on Al Aqsa — dehumanize Palestinians & imply the US will look the other way at human rights violations,” AOC wrote on Twitter, adding, “It’s wrong.”

Biden spoke with Prime Minister Benjamin Netanyahu the same day and told reporters in a conversation at the White House that his “expectation and hope is that this will be closing down sooner or later.”

AOC added in a subsequent tweet, “By only stepping in to name Hamas’ actions — which are condemnable — & refusing to acknowledge the rights of Palestinians, Biden reinforces the false idea that Palestinians instigated this cycle of violence.

“This is not neutral language. It takes a side — the side of occupation,” she wrote.

Jewish-Owned Hotel in Old City of Akko Torched by Rioters

Israeli Jews have been lynched in attacks by Israeli Arabs throughout the country since Monday; Jewish homes have been attacked and burned as have vehicles, stores and businesses belonging to Jews.

On Wednesday, the prime minister declared a civil “state of emergency” and approved the transfer of Border Guard Police forces to mixed Jewish-Arab cities where the unrest is taking place. A curfew was declared Wednesday in the embattled city of Lod but had little effect on the situation.

Since the start of the current conflict, “Operation Guardian of the Walls” Hamas and its terrorist ally, Palestinian Islamic Jihad have fired nearly than 1,700 rockets that succeeded in reaching Israeli territory. Seven Israelis have been killed, including a six-year-old boy in the city of Sderot. Hundreds of other Israelis have been wounded. 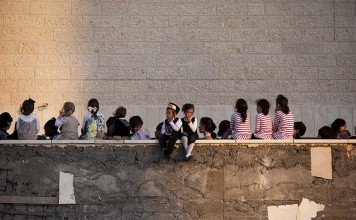