SodaStream markets a gadget that turns tap water into carbonated drinks, and its $3.7 million ad campaign during the Super Bowl spread the word while also aggravating BSD activists.


One of its factories is located in “occupied” Maaleh Adumim and includes an on-site mosque and synagogue and where Jewish and Palestinian Authority Arab workers eat in the same dining hall.

The Maaleh Adumim factory employs approximately 900 Arabs from Judea and Samaria and from areas in Jerusalem that are claimed by the Palestinian Authority.

Maaleh Adumim is city of nearly 50,000 people and is located in the Judean Desert, approximately a 10 minute-drive from Jerusalem on the roads to the Dead Sea. Before the Six-Day War in 1967, it was occupied by Jordan, which ruled the area without any legal United Nations mandate. Jordan also did less than nothing to develop the area.

SodaStream’s case, some say, is one example of how boycotting an Israeli company doing business in the West Bank can end up hurting the very goals that boycott proponents say they are trying to achieve: Palestinian rights and Israel-Palestinian peace.

But pro-PA activists have the same answer for everything: Whatever Israel does Judea and Samaria, it’s Israel’s fault.

Kristin Szremski, a spokeswoman for the Interfaith Boycott Committee, a pro-BDS group,  explained to the JTA, “Were there no settlements to begin with, Palestinians could be working their own lands. The fact that a worker goes to work every day does not indicate that it is a good thing.”

She dismissed the argument that hurting SodaStream could hurt the livelihood of Palestinians, calling it “a way to obfuscate” the issue.

The SodaStream factory follows a doctrine of equal treatment of Arabs and Jews, as set out by its CEO, US-born Daniel Birnbaum.  At a ceremony in which he was honored by President Shimon Peres, Birnbaum insisted on undergoing the same rigorous security checks to which they were subjected.

When it came time for Birnbaum’s speech, he broke with protocol and complained about the unequal treatment that his Palestinian Authority workers had received. 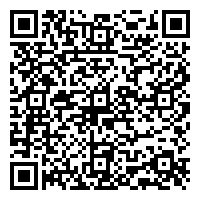