Right-wing Religious Zionist Party chairman Bezalel Smotrich has ruled out sitting in a coalition with the Islamist Ra’am Party — which is needed by the Likud Party to form a 61-seat coalition government. Right-wing Yamina Party chairman Naftali Bennett said in his remarks on Monday that anyone who works towards the establishment of a “stable government” will find him “an energetic and creative ally.”

Even with the two parties led by Smotrich and Bennett, Prime Minister Benjamin Netanyahu still needs another two seats — and Ra’am Party leader Mansour Abbas says — in Hebrew — he is open to supporting a right-wing government.


However, the Ra’am Party charter states otherwise, and Abbas speaks differently when he is addressing Arabs in Arabic.

The Islamist Ra’am Party is a political wing of the Southern Islamic Movement inspired by the Muslim Brotherhood, and is refusing to change its charter despite its expressed desire to join a right-wing Israeli government as articulated by Abbas.

The party’s 90-page charter calls for the so-called “right of return” for Arabs who left the country or were driven out in 1948, and specifically their generations of descendants, who now number above five million. Updated in 2018 and most recently reviewed in 2019 at a conference in Nazareth chaired by Abbas, the charter also states: “There can be no allegiance to [Israel] nor any identification with its Zionist, racist, occupier thought nor any acceptance of any of the various forms of ‘Israelification’ which would shed us of our identity and particularity and rights.”

The Ra’am Party charter expresses support for the failed “two-state solution” and calls for a Palestinian state to be established on Israel’s post-1967 territories as well as those of the Palestinian Authority, which did not exist as a state, or even as an autonomous region, during the Jordanian occupation from 1948 to 1967.

On the English-language website of The Israel Democracy Institute, the Ra’am Party’s description says:

“Ra’am supports the establishment of a Palestinian state with Jerusalem as its capital, with an end of the occupation and dismantling of the settlements. It also seeks the release of Palestinian prisoners and the right of return of Palestinian refugees.”

It also states: “The party advocates the recognition of Israeli Arabs as a national minority and seeks to ensure their rights in a constitution. Ra’am calls for closing the gaps in the Arab educational system and supports both the establishment of an Arab university and the development of industrial zones near Arab communities.”

Absent a successful “two-state solution” the Ra’am Party charter calls for a single binational state including both Palestinian Authority Arabs and Israeli citizens, between the Jordan River and the Mediterranean Sea.

In his speech to the Israeli electorate earlier this month, Abbas said he wants to work towards enabling the Arab community to achieve its rights in “civil, national and religious spheres and in the spheres of daily life.” He studiously avoided mentioning the bald facts about his party’s anti-Israel intentions.

In that speech, delivered in Hebrew to maximize exposure to Israeli Jews as well as Arabs, Abbas declared himself a citizen of Israel and said his party has more interests in common with potential coalition partners than differences. He placed an emphasis on what he said was his party’s desire for coexistence, and a better future for its constituents.

But four days prior to those remarks Abbas had delivered a speech in Arabic, saying Ra’am represents the “Palestinian Arab Society Surviving the Naqba” (Naqba, “catastrophe” in Arabic, is the name given to Israel’s establishment by the Arab haters in Israel and the Palestinian Authority), and spoke of the “ultimate goal – to strengthen Arab society as part of the ‘Islamic Arab Nation.’ “

Religious Zionist Party chairman MK Bezalel Smotrich has ruled out sitting together in a coalition with Abbas and his party, and on Monday (April 12), Prime Minister Benjamin Netanyahu finally gave up his attempt to convince Smotrich to accept the support of the Ra’am Party to be able to reach the 61-seat threshold needed to form a coalition government.

Yamina Party chairman Naftali Bennett meanwhile told reporters on Monday that his right-wing party would back a Netanyahu coalition. But that still leaves Netanyahu short two seats. And Bennett was coy about who he would support in the end.

“Whoever works towards the end goal of forming a stable government will find that I am an energetic and creative ally,” Bennett said, adding that he firmly opposes the necessity of a fifth election to shake out a majority.

“Whoever works to pave the way to a fifth election will find me and us fighting them with all of our might,” he said.

Thus far, the right-wing bloc has no majority. The left-wing bloc also does not have enough seats to reach the needed 61 mandates to build a coalition. Netanyahu has 21 more days to put together a government before the mandate goes back to President Reuven Rivlin, who can decide to give Netanyahu two more weeks, hand the mandate to the left-wing bloc, refer the matter to the Knesset plenum to build a coalition on its own, or simply call for another election.

Smotrich and Bennett notwithstanding, without Ra’am it may yet come down to a fifth round at the polls. 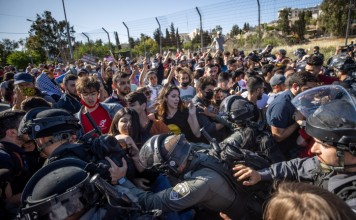