Israeli Prime Minister Benjamin Netanyahu has vowed that Israel will never allow Iran to develop “nuclear capability to carry out its genocidal goal of eliminating Israel” during a joint press conference with visiting U.S. Secretary of Defense Lloyd Austin in Jerusalem on Monday.

“My policy as prime minister of Israel is clear. I will never allow Iran the nuclear capability to carry out its genocidal goal of eliminating Israel. And Israel will continue to defend itself against Iran’s aggression and terrorism,” said Netanyahu. He mentioned the recent commemoration of Yom Hashoah and that Israel “will never allow it [the Holocaust] to happen again.”


In his remarks, Austin described his visit to the Yad Vashem Holocaust memorial in Jerusalem and how it impacted him.

“I want to reaffirm the administration’s strong commitment to Israel and to the Israeli people. That’s why I thought it was important that we meet face to face and to express our earnest desire for close consultations with Israel, as we address shared challenges in the region,” he stated.

The defense secretary continued, saying, “I also wanted to underscore my personal pledge to strengthening Israel’s security and ensuring Israel’s Qualitative Military Edge. The close and strong ties that we enjoy with Israel are central to regional stability and security in the Middle East. We both agree that we must work continue to work closely together to enhance the U.S.-Israel strategic partnership.

He added that they “discussed ways to deepen the defense relationship in the face of regional threats.” 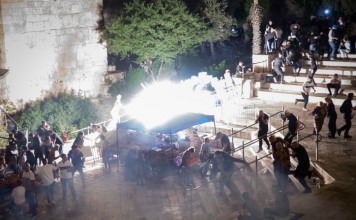