Brooklyn Borough President and New York City mayoral hopeful Eric Adams, a Democrat, who was endorsed during the primary by The Jewish Press, has been making the rounds on the fundraising circuit appearing at as many as six events, mostly house parties, each night.

He is a favorite of Jewish communities throughout New York City.

Meirov started his organization in 2005 when he was 15 years old. “Chazaq deals with children who are on the streets, and getting them into afterschool programs, Sunday school programs and teen programs,” Meirov said. “We make sure they don’t get involved in the wrong things like drugs and crime and we give them a home away from home and we build them up. These are Jewish kids in public school programs.”

Adams, 60, was born in Brownsville, Brooklyn. He was raised in Bushwick, Brooklyn, and South Jamaica, Queens. He is the fourth of six children. His mother worked double shifts as a housecleaner and had received only a third-grade education, and his father was a butcher.

Adams was never married but has a 25-year-old son, Jordan. He is seeing a woman, a domestic partner, Tracey Collins, a Fort Lee, New Jersey resident. Adams was an enrolled Republican from 1997 to 2001 and was an enrolled Democrat before 1997 and after 2001.

Adams graduated from Bayside High School in Queens in 1978. He began attending college while working as a clerk at the Brooklyn District Attorney’s office, receiving an Associate degree from the New York City College of Technology, a B.A. from the John Jay College of Criminal Justice, and an M.P.A. (Master’s in Public Administration) from Poughkeepsie-based Marist College.

When Adams was 15 years old, he and his brother were arrested for criminal trespassing. While in police custody, they were beaten by New York police officers until a black cop intervened. Adams suffered from post traumatic stress disorder after the incident but has said that the violent encounter motivated him to enter law enforcement. A local pastor added to his motivation when he suggested that by joining the police force, he could aid in reforming police culture from within.

At a Queens fundraiser earlier this month at the Forest Hills home of Shalom and Victoria Zirkiev, who are Bukharian Jews, Adams spoke for about 10 minutes. He avoided talking about his criminal past and pointed to other challenges he had in school.

“When you have city agencies that don’t do the delivery of services the way they’re supposed to, then they betrayed you,” Adams noted. “That betrayal for me started as a little boy going through public school crying myself to sleep, being bullied, called the dumb student, having people tell me that I was lazy. I happen to stumble onto a documentary once I got to college in a remedial course that told me about learning disabilities and I discovered I had a learning disability. I was able to get the resources that I deserved and when I received those resources I went from a D-student to a student on the dean’s list, but I was lucky because I heard that documentary.”

Adams’ talk, before an audience of about 35 people, some who paid $1,000 a ticket for the opportunity to hear the former state senator and support him financially, focused on the theme ‘it can’t be all about luck.’

“You can’t be just lucky so that you’re not Jonathan, who was in Times Square, just being a Jewish young man and watched himself being stomped and kicked while anti-Semitic words were thrown at him,” Adams said in a rousing tone. “When I spoke with his dad I realized how impactful that was to the family.

“You can’t be lucky. That’s not what my city is. My city is not about luck. It’s about opportunity. The way we give people opportunities is we change the dysfunctionality of the city that really believes that we can’t function and we can’t thrive. I know we can,” Adams added.

The Zirkievs said they threw the intimate gathering to inspire other young Jewish couples to be more involved in their community and in politics.

“I never thought I would be into politics,” Victoria Zirkiev told The Jewish Press. “I’m actually working in the entertainment world. I am the CEO of an entertainment company, Hoshen Productions.”

For Zirkiev it’s all about safety and her children, ages 13, 10 and three.

“I like the fact that he is a retired policeman and the fact that he is supporting the cops. That’s what we need, we need more cops on the streets,” Zirkiev said. “We need more safety. I honestly don’t feel like my kids are safe now. I would never let my three kids out alone because I don’t feel the streets are safe. I think de Blasio destroyed New York. I’m putting all my faith in Eric that he’s going to put more cops on the street and he’s going to make the city even more safe the way it was during Giuliani’s time.”

Others at the gathering agreed with the Zirkievs when it comes to safety.

“He believes in safety, increasing the budget for the police and the general well-being of everyone. We need to bring the city back to the way it used to be where it doesn’t matter what color skin you are, it doesn’t matter what ethnic group you are, what gender you are, we’re all in this together. I feel Eric is someone who can unify all the people,” Alan Sherman, a Forest Hills resident told The Jewish Press.

“Giuliani did a great job in cleaning up the city and so did other mayors in the past, like LaGuardia in the 30s and 40s. We’ve got to have a strong mayor who will stand up for what is right and not someone who is scared to stand up to the far Left. You don’t need a mayor who is scared of making enemies or may offend someone. You just get the job done for all the people. He (Adams) seems like a down-to-earth good person.”

Even though it was a friendly audience, Adams did not take questions. He had another fundraiser to attend. If Adams had taken questions Sherman would have requested he oppose upzoning.

“A lot of the city council wants to upzone residential neighborhoods where they will allow developers to tear down private houses and build high-rise apartment buildings, which will basically change the face of most of the city. If the zoning comes through, developers will not be required to have indoor (off-road) parking for the residents,” Sherman said.

He also is advocating against bicycle lanes, citing an inconvenience for families with many children and the elderly getting to doctor’s appointments. He also contends bike lanes cut down on car lanes making the carbon emission problem worse. Sherman also opposes congestion pricing citing it “is just another tax and they’re only picking on motorists. Bicyclists should pay for congestion pricing also.” He would have asked Adams to oppose that as well.

Two elected officials graced the party with their presence, one from state government and the other a retiring city councilwoman.

“Eric Adams has a long relationship with the Jewish community,” Assemblyman Dan Rosenthal (D-Kew Gardens Hills, Queens) told The Jewish Press. “He has spoken about safety. He made it clear that the Jewish community is welcome in New York City, which is crucial with the rise of anti-Semitic hate crime, to have a leader tell you that you’re welcome here is invaluable. He is someone who has the governmental experience. He is someone who is able to cut through the political noise and make the right decisions that will help move New York City forward.”

Retiring city Councilmember Karen Koslowitz, 79, a Forest Hills resident, has been a member of the council for 22 years. She served with four mayors, Adams will be her fifth. She started with Ed Koch.

“The last mayor (Bill de Blasio) was not our mayor,” Koslowitz said as she introduced Adams. “He didn’t care about the people. He cared about himself. He’s someone I’m happy to see leave. Now we are getting a mayor that has it all. He has the gumption to tell people off if he doesn’t like what they’re saying or he doesn’t like what they believe in. That is someone I respect and I admire. I look forward to your leadership in the next eight years.”

Curtis Sliwa, a community activist and founder of the Guardian Angels, is running against Adams in the November election as the Republican candidate. 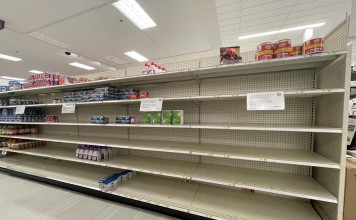