New York City Mayor Eric Adams unveiled a 16-page “Blueprint to End Gun Violence” on Monday during a news conference in which he warned that people traveling in and out of the city will soon be subject to random checks aimed at stopping the entry of illegal firearms.

Spot checks are to be set up at all entry points to the city, including train stations and bus stations, as well as at the Port Authority, WNYW reported.


“We will also move forward on using the latest in technology to identify problems,” Adams added. “From facial recognition technology to new tools that can spot those carrying weapons, we will use every available method to keep our people safe.”

Bag checks may also be added to the random screenings.

Adams also announced that he is restoring the NYPD plainclothes units that were disbanded in 2020 by previous Mayor Bill de Blasio.

The new units, to be called “Neighborhood Safety Teams” will be deployed in the 30 precincts reporting some 80 percent of the city’s violent crimes, according to Reuters.

Around 400 police officers are expected to hit the streets within the next three weeks, Adams said, adding, “We will have boots on the ground on every block.”

The mayor called the gun violence in the city “a public health crisis” that he said was “the Number One threat in our city.” He said he wants to build youth employment and mentoring programs, as well as to increase resources for mental health services.

Additional plans include concrete policing policy shifts and pressure on state and federal lawmakers to amend and/or enact laws to get illegal guns off the streets.

The move follows a deadly ambush last Friday in which two cops were murdered by an ex-convict out on probation while responding to a 911 call having to do with domestic violence. The third cop on the scene returned fire at the shooter, critically wounding him.

Rookie NYPD Officer Jason Rivera and his partner, Officer Wilbert Mora, were both rushed to a local hospital. Rivera died immediately; the second lost his fight for life after two days of surgeries and a transfer from Harlem Hospital to NYU Langone Medical Center. The injured shooter was also taken by ambulance to a hospital, and later died of his wounds.

All flags will continue to be flown at half-mast as a mark of respect to Officers Wilbert Mora and Jason Rivera. pic.twitter.com/2FPOPhTvam

The NYPD Police Benevolent Association (PBA) praised the mayor’s plan as a step in the right direction. 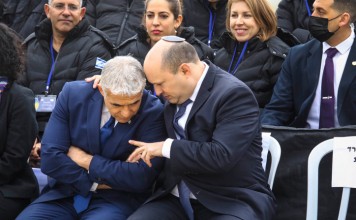