Helen and Asnat: Works on Iron

Oftentimes, the art world functions like an ecosystem, whereby certain artist-producers generate innovative, new content, and artist-consumers readily borrow from those raw materials and shape them into new products. The bad eggs of the system are the artist-carnivores, like infamous Vermeer forger Han van Meegeren, who dishonor their peers by doing violence to their work, though most artists are herbivores who go about their business without doing tremendous damage to their community.

Some artists, like Helen and Asnat, whose work is on exhibit in “Helen and Asnat: Works on Iron” in DUMBO, are scavengers and take after sculptor Louise Nevelson (born Leah Berliawsky), who would all but raid garbage dumps in search of materials for her sculpture-collages. Nevelson, whose work is on exhibit at the Jewish Museum, painted her collages in monochromatic colors (first black, and then white), which lends the enterprise the look of alien technology, with no discernable purpose. But viewers who confront Nevelson’s work immediately notice how the process is as much a part of the piece as is the material. The work is a testimony, like sculptural footprints, to Nevelson’s journey to create the piece. Her art is her journey.

Helen’s and Asnat’s work must also be engaged not only as sculpture and installation, but also as voyage and adventure. Their works incorporate “found objects” – that is to say objects they appropriate, but did not create – but unlike many collage artists, Helen and Asnat do not haphazardly chance upon their materials; they seek them out actively, and often to great expense.

Helen Shaoul was born in Holland and immigrated to Israel at age 23. She studied photography at the Camera Obscura School in Jerusalem, where she still lives and works, and studied sculpture and painting with private teachers. “Growing up in a peaceful country like Holland and moving to Israel in 1973 helped release the need to express myself in a way that is my own,” she wrote in a release. “I perceived the many cultures that coexist in Israel as a colorful assemblage, which provided me with the inspiration I needed.”

Asnat Greenberg was born in Israel, and also lives and works in Jerusalem. She studied interior design at The College of Management in Jerusalem and earned her bachelor’s and master’s degrees in social studies from The Hebrew University (Jerusalem).

Old coins and Jewish Prutha coins from the era of the
Roman Procurators of Judea, 96 x 143 x 4 cm.

The two have been good friends for many years, and sharing a common artistic perception, they decided to collaborate. Their works, as the exhibit title suggests, are literally attached to iron, rather than canvas, which is painted black. For materials, they use old coins (including some marked prutha and one which is labeled “Palestine 1935” in English, Hebrew and Arabic), antique prayer-shawl ornaments (the silver pieces attached to the part of the talit that surrounds the head, in some talitot), multicolored oriental rugs, Yemenite silver amulets (not unlike mezuzot) and Bedouin amber beads and bracelets. Perhaps most strikingly, many of the pieces incorporate silver ornaments from old (Sephardi) Torah scrolls.

The works are quite multidisciplinary − a coin collection, aesthetic graveyard for ritual objects, heavy, iron base, and floor covering all in one. But the use of Torah scroll and talit ornaments requires elucidation. Does this use of ritual objects (which admittedly were rotting away in synagogue attics unused) do damage to their sacred status, where they should be allowed to decay or be buried as shaymos? Or does the art, instead, do the exact opposite of desecrating the objects by recasting them in an artistic context, whereby they bring joy to viewers and once again fulfill an important public function?

“First of all we checked and know that it is not forbidden to use these ornaments as we did. We found these ornaments all dirty and dusty and hidden in a dirty storage room,” the artists told The Jewish Press. “We feel that by cleaning them and putting them in the way we did, we brought life back into them and brought the beauty out of them.”

The artists added that they feel their work is universal, but “religious Jews will feel connected to the works in additional ways, because they will recognize the ornaments and will feel more attached to it.” Surely, this is not the place to pass halachic judgments on art, but perhaps the works’ political message can at least complicate the situation and establish the works’ role as respectful and even noble.

At the root of Helen’s and Asnat’s pilgrimage-collage is an assembly of different objects that come from all different sorts of Jerusalem dwellers. By providing a firm (even iron) platform, upon which Jewish ritual objects can coexist with Yemenite and Bedouin artifacts, the artists present an aesthetic model of collaboration and peace. In an untitled work made of Yemenite silver amulets and Bedouin amber beads, Helen and Asnat arrange the objects (silver and reddish-brown) in a horizontal manner that suggests a flag with stripes. The amulets, which contained parchment prayers inside and would be attached to a worshipper’s clothing, were actually used by Jews as mezuzot, according to the artists. The piece, then, not only incorporates different traditional relics harmoniously, but even contains objects that themselves were used in different religious contexts by people of different faiths.

“We are drawn to these materials. Israel is rooted in the oriental region of the world, and is co-inhabited by different cultures. The materials we use are derived from these cultures. Through these pieces we connect with the Jewish, Israeli and regional cultures, creating a linkage between them and emphasizing their common characteristics,” the artists write in an artistic statement.


“We use these artworks as a bridge between past and present. The mere thought that people of various cultures once used these same ‘materials’ in the course of their daily lives mesmerizes, exhilarates and links us to them,” they continue. “We conjure up their images. The Jew standing in pray [sic], donning the praying-shawl with the silver ornament, the hardworking Bedouins and Yemenites crafting the amulets and beads, the people who used these very same coins in days yonder.”

Indeed, in the catalog essay, curator Doron Polak explores the “debate between so-called high art and the more popular craft which engages mainly in decoration,” a debate which he calls “semantic.” To Polak, viewers ought not consider works like Helen’s and Asnat’s craft, as opposed to art. Polak is right that the sculptures deserve attention, but they do seem (like craft) to focus more on utility than on particular artistic arrangement. But within that context, Helen and Asnat manage to liberate ritual Jewish objects from their decrepit context, and enlist them not only in the service of beautification (hiddur mitzvah), but also in seeking to repair cultural conflict (tikkun olam).

For more information on Helen and Asnat, visit their website at
www.helen-and-asnat.com.

Menachem Wecker is a painter, writer and editor based in Washington, D.C. He welcomes comments at mwecker@gmail.com. His painting, “The Windows of Heaven,” will be on exhibit at the JCC of Greater Baltimore as part of an exhibit through June 10. 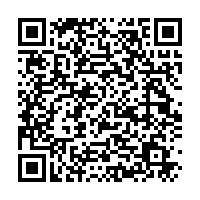