The other photographers snapped their pictures of the pomp and circumstance surrounding the outgoing president as he boarded his helicopter, Marine One, officially marked “United States of America.” But Annie Leibovitz took a different approach to her photo of the 37th president – the only one to resign in office.

In her “Richard Nixon leaving the White House, Washington, D.C.” (1974), shot for Rolling Stone magazine, the president is invisible inside the helicopter, which has already lifted off the ground. Three officers hold their hats to prevent them from flying off with the wind gusts as they roll up the red carpet, and the clouded ghost of the Washington Monument peers out from behind the front of the helicopter. Leibovitz uses the medium of photography, usually wielded to capture presence, to portray the subject’s absence. After all, the story was one of Nixon’s departure for his misdeeds, and it only made sense to show the president’s exile by excluding him from the photo shoot.

“It wasn’t the kind of picture that most magazines would want to run or had room to run then, but a lot can be said in those moments in between the main moments,” Leibovitz writes in her new book, Annie Leibovitz: At Work. She had been sent to Washington with Hunter S. Thompson to cover Nixon’s resignation. But it quickly became clear to the Rolling Stone editors that Hunter, who was no fan of Nixon’s, had resisted the urge of all the rest of the photographers to flock to the White House and had stayed at the hotel with no intention of filing a story. Instead, they chose to run Leibovitz’s photos without any fresh copy from Hunter.

The Nixon story is just one of many that Leibovitz tells in the new book. Her photographic exploits are legendary. She took pictures of Al Sharpton at the PrimaDonna Beauty Care Center in Brooklyn in 1988, O.J. Simpson during his trial in 1995, and of Arnold Schwarzenegger at the Mr. Olympia bodybuilding competition he won in South Africa in 1975. Her official photo of the Bush administration in 2001 included former Secretary of State Colin Powell, former Vice President Richard Cheney, former President George W. Bush, former National Security Advisor Condoleezza Rice, former White House Chief of Staff Andrew Card Jr., former CIA Director George Tenet, and former Secretary of Defense Donald Rumsfeld.

The book is a how-to guide of sorts for aspiring photographers, with a “Ten Most-Asked Questions” section at the end. The first question touches on Leibovitz’s advice to a young photographer. “I’ve said about a million times that the best thing a young photographer can do is to stay close to home,” Leibovitz answers. “Of course there are many good photographs that have nothing to do with staying close to home, and I guess what I’m really saying is that you should take pictures of something that has meaning to you.”

Leibovitz hints in the book to her Jewish heritage. She lived on a kibbutz in Israel in 1969 and studied Hebrew, and she covered the Israeli invasion of Lebanon in 1982 for Rolling Stone. In the book, Leibovitz remembers traveling through the war zone into Beirut with a writer and being very disturbed by the ways other photographers covered the war.

“One of my most vivid memories of the trip,” she writes, “is of watching some wire service photographers rearrange a scene at an observation post in an abandoned villa in the hills overlooking the city. It was a slow day in terms of fighting, and they were moving the rifles around to make a better picture. That confused and shocked me.” The wire photographers’ scene seems to have been as staged as Leibovitz’s Nixon shot was real.

In an interview, Annie’s brother, Phil Leibovitz, who lives in Bethesda, Md., said that Annie’s religious identity actually does inform her work. The two grew up in Silver Spring, Md., on a street where half of the families were Orthodox, Phil estimated. The Young Israel, where Rabbi Gedaliah Anemer remains the rabbi, was on the same street.

One way that living in Silver Spring might have impacted Annie’s work, Phil said, was that one of her art teachers at Northwood High School told her she would never be an artist. “Maybe it was a motivator,” he said.

Several of the photographs in Leibovitz’s previous book, Annie Leibovitz: A Photographer’s Life: 1990-2000 feature her parents and family in Silver Spring. “My parents renewing their marriage vows, Washington, D.C.” (1992) shows the guests of honor sitting to the right, surrounded by family and friends in a ballroom. Annie’s father wears a kippa. In a later series, “Judean Memorial Gardens, Olney, Maryland” (February 6, 2005), Leibovitz photographed her father Samuel’s military funeral. Per the Jewish custom, mourners throw fistfuls of dirt over the grave.

According to Phil, Annie is Zionistic, and “She is not overly religious, but she sees the importance of raising her kids Jewish. Our parents taught us that.” He added that some of the Israel pictures, like one of Golda Meir, were among Annie’s favorites.

Cover shot. Annie Leibovitz: At Work
Leibovitz’s 1969 gelatin silver print, “Kibbutz Amir, Israel” is in the collection of the Jewish Museum in New York. The photo, which does not appear in the new book, could pass as a variation on the absurdist play “The Chairs” (Les Chaises, 1952) by Eugene Ionesco, wherein more and more chairs get added to the stage. Leibovitz’s photograph has the eerie feel of a Twilight Zone set – a clearing in a forest, devoid of human presence, with 10 ladders of varying sizes standing in the grass. The bags lying in the foreground are a clue to the subject: an orchard in which the ladders help the farmers pick fruit.

It is hard to say whether photographs of kibbutz orchards, Jewish funerals, and Israeli politicians amount to Jewish art. There do not seem to be any direct quotes from Leibovitz about whether her Jewish identity – however she defines it – informs her photographs, or even a specific body of works. Even if there was such a quote, the artist does not necessarily get to have the final word, even on her own work. And yet, Leibovitz’s time on the kibbutz does seem to have impacted her in a meaningful way. It might not have shaped her photographic vision as much as Hunter Thompson or Tom Wolfe did, but perhaps enough, that Jewish viewers who seek Jewish content and themes in her work are not merely projecting.

Menachem Wecker welcomes comments at mwecker@gmail.com. He is a painter and writer, and resides in Washington, D.C. 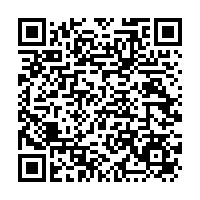