Storytelling is a rare gift that can be used to inspire, entertain, even transport a person to another place and time. Setting storytelling to music requires an additional gift – the ability to craft just the right words and setting them to just the right music to evoke sadness, contemplation, laughter, introspection, or another emotion.

Motty Ilowitz’s new album, Rayoines (“Ideas”) captures many human emotions. Sure, with his talent, he could have found plenty of pesukim from Tehlllim or words from davening for his songs, but he wanted to take his music and ideas to a different level. The album, almost entirely in Yiddish, expresses feelings that we many times have experienced but never successfully translated into words.


Ilowitz grew up in Brooklyn, and Yiddish was his first language. He’s written poems, stories, and grammen. Now living in Staten Island, he is busy sharing his compositions and talent with the Jewish music world. Extremely modest and honest, he believes that when a person is blessed by Hashem with talent, he or she must use that talent and not squander it.

“Rayoines” contains 10 songs full of ideas. The album opens with “Yaider Keiner” (Everybody, Nobody), a fun and humorous track that introduces us to two characters whom we all speak about, but never really met: Nobody and Everybody. We copy them and want to be like them, but who are they really? What do they look like? Have you ever seen them in shul? At the store? 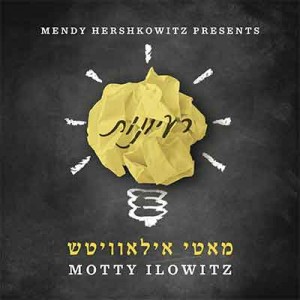 “I want to meet them,” sings Ilowitz, “but I’m sure they look different to everyone.”

A self-proclaimed introvert, Ilowitz grew up on the music of Chabad and the late Rabbi Shlomo Carlebach. He admires the lyrical songs of Abie Rotenberg since they tell stories and connect a listener to what is going on in them.

His song “Yiddishe Taavos” (Desires) flips our perceptions of cravings and yearnings on its head. Again, using humor, Ilowitz holds a mirror to desires we take for granted but a non-Jewish observer would never understand – like longing for overnight kugel or rushing through Shmoneh Esreh in order to be the first to proclaim, “Ya’aleh vYavoh!”

There are deep and contemplative songs on the album as well. “Veitug” (Pain) reminds us that pain is sometimes necessary and can make us stronger and better. In “Gemeint,” a song 10 years in the making, Ilowitz shares ideas about matters he thought he understood but realizes he didn’t. He sings that he used to believe wealth made one wise, that he who had the last word was the winner. He thought technology would make the world a better place and heal the sick.

With an uplifting tune, he admits that he is growing every day and getting wiser and seeing the world through new prisms. He sings that he now understands that one word – the right word – can sometimes be better than a whole argument and that giving makes you richer, not poorer.

The album was produced by Mendy Hershkowitz, leader of Sababa Band. Ilowitz calls him a “genius on the next level.” Together they debated and considered every note, chord, and instrument. Hershowitz, says Ilowitz, was able to “preserve the precise concept of my songs and ideas, even while ensuring that the album has the best music, mix, beats and instrumentation.”

Motty Ilowitz is modest, his music inspirational. By releasing “Rayoines,” he is not looking for fame and fortune; rather he wants his listeners to be moved and to become better people. He also wants younger listeners to continue to be creative and realize that they too can write stories and poems – and even put them to music.

The album took a year to produce, and Ilowitz is contemplating translating some of the songs into English to reach a broader audience. In the meantime, his music can also be found on iTunes and Amazon. For more information, visit www.mottyilowitz.com