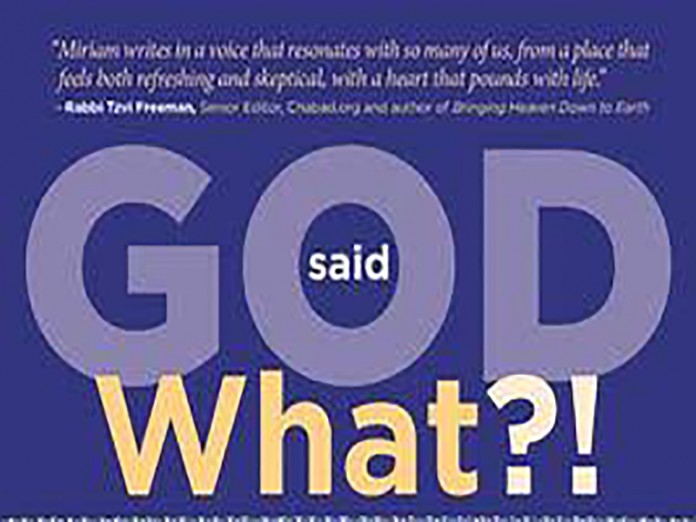 We pass, interact, catch glimpses of, and tell ourselves stories about many people over the course of our lives, yet we generally don’t know much about other humans. Some of us share on social media or via old-school media, and yet because we share what we want others to see in the hopes that they will think of us what we want them to think, they still come away not knowing a very well-rounded account of us. Still, some people work hard and painfully negotiate with constraints of emotional, religious, sociological, and psychological factors to allow others to see, know, and benefit from their true story.

Miriam Racquel (Meryl) Feldman has fought the good fight in many ways in her life so far, not least of which are the years of effort she put into getting her story, struggles and all, out onto the page and into the world. In well over 400 pages she straightforwardly reveals her Jewish journey. We should be grateful that she is not just another person who is willing to let us think she fell off a truck the way we see her today. She allows us to go back with her to meet herself, friends, and family and to follow the ebb and flow of her spiritual and philosophical odyssey, and we, the readers, come away better off for the experience.

The first third or so of the book, which starts in 1989, covers Meryl’s receiving a 13-page letter from her college boyfriend, David, who is in Israel, and the ripple effects of that correspondence. He has been studying in Aish HaTorah, has accepted all aspects of Jewish tradition, and is determined to stay in Israel, keep learning Torah, and become a rabbi. Meryl reaches out to a Reform rabbi, who informs her that her boyfriend is stuck in a cult. The cab driver on the way to the Old City of Jerusalem agrees with the Reform rabbi, and so does Meryl, at first. She goes to Israel with the goal of getting him out.

It doesn’t take long for her to become more interested in understanding David’s embracing of Judaism. She starts attending classes, briefly at Aish HaTorah’s beginner’s classes, then in a six-week program with Rabbi David Aaron at Israelite. She then continues learning at the Aish HaTorah women’s school (which has since closed). All this time she insists she neither believes in G-d, nor finds Orthodox Judaism compelling or particularly appealing. But she is drawn to David and this helps her to stay open. Hard as she tries, in this period of her life, she does not buy into the world that her boyfriend is committed to.

While David is finishing college and Meryl has graduated and is working (for a veterinary clinic and helping wildlife, two manifestations of the idealism and meaningfulness in her life), she is introduced to the hospitality of Chabad, which allowed Meryl and David to consistently be together on Shabbos. She is taken by Chabad, yet hesitant, as she puts it, “I had begun to rethink the ways of the secular world, and much of those ways lost sense to me. Unfortunately, at the same time, the ways of the religious world still made little sense to me.”

One day at a women’s shiur someone recommended that Meryl spend some time at Bais Chana, a Chabad program for women, which at the time was a women’s school based in a mansion in Minnesota. She is very taken by the Torah teachers, the women, the ideas, and Chabad. She then spends some time at a girls’ seminary in Crown Heights, and eventually goes back for a second stint at Bais Chana.

Feldman shares a lot of the Torah she learned at this time, which clearly resonated for her more deeply than the approaches she had been presented with before encountering Chabad. She comes to deeply believe in G-d as the Shepherd of the Jewish People through her studies under teachers such as Rabbi Manis Friedman. As Meryl finds the ideas she’s taught to be more convincing, her story becomes more compelling as well.

During the early nineties, she gets extremely into Chabad and commits to it fully. She comes to believe that the Lubavitcher Rebbe is the king and leader of the generation, and that he is Moshiach, something that she believes to this day.

I am glad that I took in every word of this book. It is filled with many interesting Torah thoughts and contains a well-told and somewhat mysterious tale as well. This book was clearly a labor of love in more ways than one. There is a lot to learn from the several-year-long story that the book covers, including what happened with that boyfriend, David.

The book ends with a brief epilogue, but perhaps one day we will be treated to a sequel telling us some of the details about the almost thirty years since this book’s main plot took place. Until then this rich book serves to give a lot of food for our hearts, minds, and souls to take in.