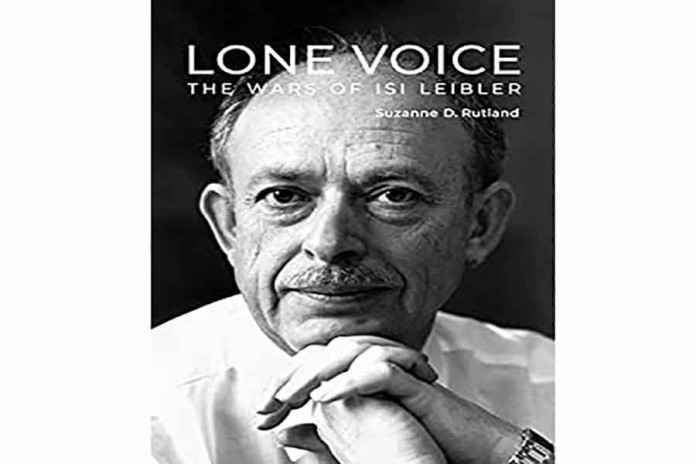 
In every generation a class of leaders emerge who combine steely determination, independent thought, and profound vision to effect historical change and leave a lasting impression on the world around them.

Among them is Isi Leibler, an Australian-Jewish businessman and activist whose compelling life story has now been chronicled by Dr. Suzanne D. Rutland in a masterful authorized biography, Lone Voice: The Wars of Isi Leibler.

The culmination of 20 years of research (including the perusal of over 80,000 pages of documentary evidence), Lone Voice takes the reader on a journey through Leibler’s life as he makes a name for himself in Australia and around the world as an astute businessman and indefatigable advocate for Israel and the Jewish people.

A captivating read, Lone Voice provides an exhaustive account of Leibler’s life as he develops from a young Belgian Jew escaping with his family to Australia on the eve of World War II to becoming a powerhouse within the Australian Jewish community.

Bold and independent, Leibler advocated on behalf of Soviet Jewry; fought neo-Nazis, Holocaust deniers, and former Nazi collaborators; helped rescind the infamous “Zionism is Racism” resolution at the UN; worked to foster relations between Israel and East Asia; and fought an uphill battle to expose high-level financial corruption at both the World Jewish Congress and the Claims Conference – all while heading one of Australia’s largest travel agencies and becoming one of the wealthiest people on the continent.

Dr. Rutland does an exceptional job at providing historical background, which helps the reader better understand the context of Leibler’s activities. On the Soviet Jewry movement, she introduces the reader to such key personalities as Nahum Goldmann (the elder Jewish statesman whose strategy of quiet diplomacy vis-à-vis the Soviets was vehemently opposed by a young Leibler) and Shaul Avigur (the head of Israel’s clandestine “Liaison Bureau” who recruited Leibler to become a leading advocate for Soviet Jewry). Leibler actually lobbied Australia to be the first country to raise the issue of Soviet Jewry at the United Nations in 1962.

Dr. Rutland also does a fantastic job at using Liebler’s life story as a springboard to introduce the reader to the dynamics of the Australian Jewish community in the latter half of the 20th century. This includes the internecine rivalry between the Sydney and Melbourne leaderships, the 1962 bout between the Jewish establishment and the far Jewish left (the “Sam Cohen Affair”), and the communal debate over legitimate criticism of Israel (the “Australian Jewish Herald Affair”).

At over 600 pages, Lone Voice is a monumental achievement. However, it has its shortcomings. One major fault is that by quoting, it seems, every source she came across, Dr. Rutland authored a narrative that sometimes feels bogged down in unnecessary details. Rutland also doesn’t seem to discuss Leibler’s activities with a critical eye, only seldom providing mild criticisms.

Over all, though, Lone Voice is a great read and a welcome addition to the bookshelves of anyone interested in learning about Israel and the Jewish people.