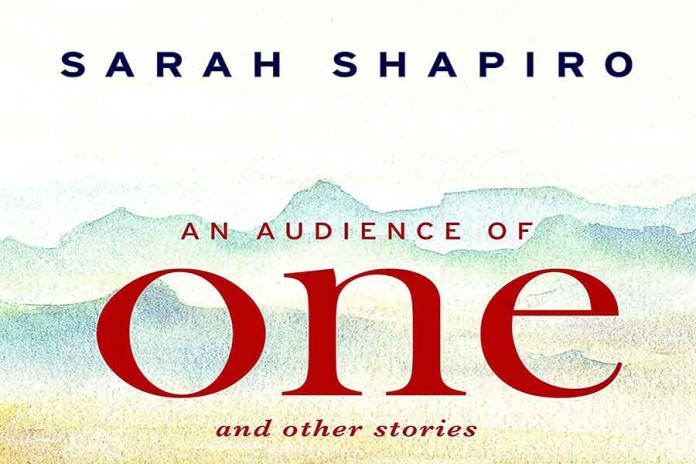 Title: An Audience of One
By Sarah Shapiro
Mosaica Press, 344 pages


Eighty-five pages into her latest book, Sarah Shapiro shares that years ago she asked a prominent rabbi if it would be halachically permissible for her to publish something she wrote. She describes what she felt while waiting for him to read her piece and respond, while she and the rebbetzin sat drinking tea. After over an hour of his silence, he said, “Not only would it be alright for you to publish it…” And then he took a beat and, she writes, “the earth paused on its axis.” When the earth started revolving again, he finished his sentence with, “You have a responsibility to publish it.”

Shapiro threw out those early stories, based on turns of events she discloses in the book. Though that work was not published, Shapiro feels that “it was the act of writing, and then of tearing them up, that had preserved, for me alone, the nucleus around which all the rest of my life could circle.” This book is a later part of this circle of Shapiro’s life. This book is a remarkably articulate masterwork that stands alone.

Shapiro is a beacon of light in the frum world and in the world at large. Each of her books is filled with gems of true literature, poetry and depths of spirituality. This most recent one works as a stand-alone and also as a topping off of close to three decades of a unique style of frum personal writing that began with an unusually honest account of the day-to-day ins-and-outs of raising her young children.

There are pieces that you can expect to read in popular frum periodicals (and that’s where parts of the book originally appeared.) Some of these include interviews that on the one hand seem typical but upon a closer look are clearly out of the box, like an interview with a writer who can no longer write but can dictate her writing to her interviewer. Some of my favorite lines at first read like asides, such as, “We laugh together, and I’m wishing I could convey, with words, Naomi’s hesitations and silences.”

Other pieces are nostalgic looks back at the author’s life, including the memory of her humanistic mother (the loyal wife of her famous, groundbreaking father), who sometimes chided her on turning Orthodox, being the one to introduce her to G-d’s presence in this wonderful world.

The writing in this book, along with the seven previous books of this author, means a lot to me, perhaps more than my words can sufficiently convey. It is so rare to find a Jewish book in which you feel sincerity and faith, and appreciate consistently excellent writing. The theme of prayer is addressed in a personal and universal way several times, including a piece about the power of praying for rain, and I was moved each time. The point that faith and prayer are personal, powerful and real is driven home from different angles, including the viewpoint that faith is “being willing to put one foot in front of the other and keep going.”

Shapiro has succeeded in sharing her sincere and true voice. An Audience of One is one rare example of the vulnerable, literate Jewish writing that we so seriously need. I highly recommend you read, and take into your neshama, this book’s essays, stories and poems.