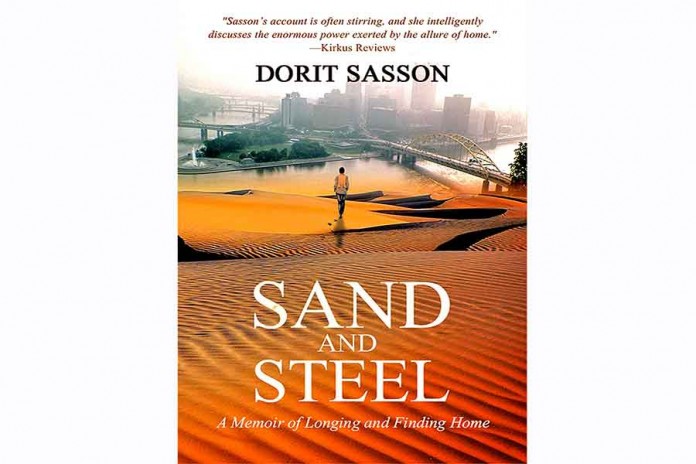 Title: Sand and Steel: A Memoir of Longing and Finding
By Dorit Sasson
Published by Mascot Books


When Dorit Sasson was 18 years old, she followed the advice of her Israeli-born father and left New York City, where she was born and raised, to enlist in the Israel Defense Forces. This decision changed the trajectory of her life. (Full disclosure: Sasson is my friend and neighbor.) She adopted Israel as her home, and eventually married and started a family. She thought she would always live there.

However, 18 years later, cultural changes on her secular kibbutz and economic hardships forced her and her Israel-born husband to make the difficult decision to come to the United States. Following the recommendation of a friend, the Sassons came to Pittsburgh, where they found affordable housing, employment and a supportive community. After struggling for a long time in Israel’s uncertain economy, they finally had some stability, but it came at an enormous cost – sacrificing the dream of living in Israel.

In 2016, Sasson chronicled her youthful move and IDF experience in the memoir Accidental Soldier: A Memoir of Sacrifice and Service in the Israel Defense Forces. Now, she examines the phenomenon of reverse migration in Sand and Steel: A Memoir of Longing and Finding.

Written in fluid prose, the book offers a glimpse of Sasson’s intellectual and emotional processing of this difficult transition, including ongoing questioning of her identity – is she Israeli? Is she American? She feels out of place in the country of her birth, and unable to return to the homeland of her choosing. In addition, she writes of constantly “code switching,” going back and forth between Hebrew and English, all the while intensely aware of the dual life she is living.

She also writes of her evolving relationship with Judaism. In her youth, her family was not observant, and in her young adult years in Israel, Orthodox Judaism seemed rigid and uninviting. Now, living in Pittsburgh’s Squirrel Hill neighborhood, she is welcomed and helped by members of the Orthodox community. She had loved the communal atmosphere of the kibbutz, and was looking for a similar sense of community. In Pittsburgh she finds herself gravitating to the religious Jewish community, which offers a similar sense of warmth. Over time, she and her family become more observant, and regularly participate in services at a Chabad shul.

Throughout the book, Sasson struggles between acclimating to her new life and community and questioning whether she has made the right decision, and if she will ever be able to return to Israel. Relatives and friends in Israel also criticize the Sassons’ move, adding to the complicated mix of feelings. The book spans more than a decade, from 2006, when they first considered leaving Israel, through 2018, when the Squirrel Hill community was traumatized by the mass shooting at Tree of Life synagogue. On both sides of the Atlantic, there are feelings of uncertainty and longing. There is connection and disruption.

Over the years, the Sassons are able to visit Israel a few times, which introduces additional dimensions to their experience and finally offers a small measure of healing. Their story is an up-close look at one family’s experience that is relatable to others, whether or not they have lived in Israel.

Sand and Steel is a thought-provoking and worthwhile read. Throughout the book I enjoyed Sasson’s colorful use of Hebrew phrases, such as the word “chapcha,” to describe an enthusiastic pat on the back, which brings to life Israeli speech patterns and attitudes.

Pittsburgh is known as the Steel City, which accounts in part for the book’s title, but Sasson also compares Israelis to sand, because they are forced to be malleable in adapting to challenging and unpredictable circumstances, whereas Americans are steel – boldly pushing forward with their plans.

For Jews, aliyah is a celebrated and storied phenomenon: Jews return to their homeland and live an idealistic life. Its opposite, yeridah, is spoken about much less, and is often cloaked in shame. If you leave Israel is it because you’re not tough enough? Too materialistic? Not dedicated enough? Sasson shows that, for her family, the decision was agonizing, and was motivated by multiple factors. As the book proceeds, Sasson comes to terms with her new life, and finds ways to integrate her two identities.