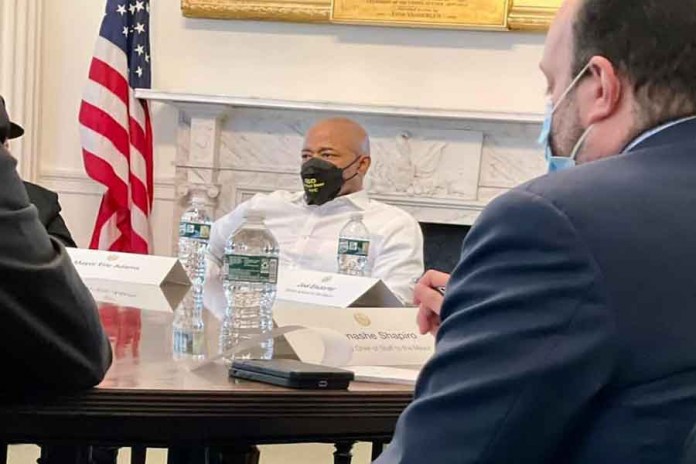 Mayor Eric Adams held a citywide emergency meeting at City Hall on Thursday, February 17, to address the alarming number of antisemitic hate crimes that have plagued the city this year.

“We take crimes seriously,” Sewell [is reported to have said – note added by editor]. “We value the partnership we have in the [Jewish] community and we hope to enhance that moving forward.”

This was the first time the Jewish community had the opportunity to see how seriously some of the city’s new administration under the leadership of Adams, New York’s second Black mayor and Sewell, New York’s first Black female Police Commissioner, take the needs and concerns of the city’s 1.1 million Jews.

The meeting was led by Senior Mayor[al?] Advisor Joel Eisdorfer and Fred Kreisman, the commissioner of the mayor’s Community Affairs Unit. Eisdorfer is the first Chasidic Jew and the third Orthodox Jew appointed to Adams’s administration.

The NYPD reported there were 43 antisemitic hate crimes handled by their units so far this year. That’s compared to just 11 cases during this time in 2021.

In mid-February, staff arrived at Miriam Restaurant on the Manhattan’s Upper West Side to find graffiti plastered on their outdoor seating area that read “F** Jews.” A week before, swastikas and other graffiti were spray painted on a school bus in Williamsburg. Physically violent attacks were also reported in February, including an unknown male running up behind a Chasidic Jew in Brooklyn and brutally punching him in the face from behind.

“On Friday night on Avenue L and East 32nd St, I saw a video a week and a half ago, where a person with yarmulke and glasses were knocked off,” NYPD Commanding Officer of Community Affairs Inspector Richie Taylor told The Jewish Press. “Horrific. And I see it going on a lot of places in the city. I think everyone in the city should be outraged by that, an attack on one is truly an attack on all.”

“It was important for the mayor to bring us all together to say this is a priority, I’m concerned and I have your back,” said Councilman Lincoln Restler, whose District 33 includes Williamsburg, Brooklyn. “And I think that sentiment of solidarity was clearly conveyed.” When asked about solutions discussed, Restler said, “My focus in the 33rd District is to deepen connections with leaders and community members of diverse backgrounds. We need to demystify one another’s communities. The South Williamsburg-Bedford-Stuyvesant area in my district has been a major hotspot of antisemitic activity. But we’ve also seen incidents in Kew Gardens and in Midwood and other parts of New York City. I think in recent years we’ve seen a significant increase in anti-Asian and anti-Jewish crime – but I don’t think people are traveling across the city to commit these acts. I think this is a discussion with our neighbors, to engage them about culture and history and traditions and about the Jewish community and build bonds of respect and friendship.”

Many other ideas were discussed as to “who” was perpetrating these hate acts, and while there was much focus on young male offenders, the mentally ill were not ruled out as a group to be addressed.

“A lot of community members confirmed they saw a lot of hate crimes appear to be committed by people who unfortunately have a mental health crisis going on, and the young and naïve,” Taylor said. “So, we had the education chancellor come in to talk about teaching young kids about sensitivity and understanding and how hate has no place in New York City, and also about having Holocaust education.”

Members of the City Council Jewish Caucus echoed this sentiment. “It’s very difficult times compared to last year – in the first month we had a huge increase in hate crimes,” Ari Kagan, first-term Councilman (District 47, including Seagate) and member of the Jewish Caucus, told The Jewish Press. “So we talked not just law enforcement but education. And political leaders, clergy, Jewish and non-Jewish people should be involved. But it’s not just antisemitic crimes that are happening, crimes against other communities have increased as well (such as the plight of the Asian-American community). The mayor was very blunt and said the situation was absolutely unacceptable and he will do whatever it takes to fight all hate crimes, especially antisemitism.”

When asked about dialogue the mayor was having with community leaders of the city’s Black community and other prominent communities to address hate crimes, Taylor mentioned the mayor’s interfaith breakfast a couple of weeks ago, and said also, “We had a beautiful meeting recently with leaders of New York’s Pakistani Muslim community.” In 2019, before coronavirus, there was an onslaught of attacks on Jews [coming out of the Black community – I’m not sure what that means]. Asked if the city was considering reaching out to Black members of the Orthodox Jewish community, many of whom live in Williamsburg, Flatbush and Crown Heights, for them to go into the schools and help educate the kids, Taylor said, “Absolutely, I think it’s a great idea.”

In all, community leaders expressed their happiness with the result of the meeting. “The consensus at the meeting was that the mayor is taking the spike in hate crimes and in particular antisemitic hate crimes… rather seriously,” Rabbi Mendy Mirocznik, executive vice-president of the Rabbinical Alliance of America, told The Jewish Press. “The mayor made it clear that he will not tolerate under his watch antisemitism and hate, racism and bigotry in any form. He made it clear that there is no compromise or room for hate in New York City. What was most remarkable was that the mayor went out of his way to ask the Jewish community for guidance in combatting these issues, including the request for serious input in devising a school curriculum that focuses on teaching our children that hate is wrong.”

Mirocznik went on to quote Adams, saying, “Children are not born to hate they are taught to hate. It is our job to educate our children on the right path of respecting all people and to judge them on their actions, not their appearance.”