The 16th annual Rebbetzins’ Conference was held last week and it was one of the most interesting ones to date. Actually, that is what I say every year as I leave; I’m always amazed at the topics covered and the fine rostrum of speakers at this event that draws rebbetzins from all over the New York/New Jersey area.

The theme of this year’s conference/luncheon was Striking a Match: The Rebbetzin’s Role in Shidduchim. Rebbetzin Judi Steinig, associate director of community services for the Orthodox Union, opened the event thanking the sponsors – Ohel and the Task Force on Children and Families at Risk – and the cosponsors – the OU, HASC, MASK, and Women’s League – Rebbetzin Steinig noted that shidduchim is a topic of conversation wherever we turn and it is something we surely have to deal with.


The conference this year was in memory of Shlomo Zakheim, a”h, a person whose name was synonymous with acts of chesed on a great scale. His wife, Faygie Zakheim, greeted the rebbetzins and introduced the first speaker, Rebbetzin Esti Reisman.

Rebbetzin Esti is one of the beloved rebbetzins of the conference, speaking every year. Although she is married to the well-known Rabbi Yisrael Reisman, she is a force in her own right.

She acknowledged she is not one of those people who immediately upon meeting a “single” thinks of a good match for him or her. However, she also recognizes that people expect a rebbetzin to know someone for their child and to facilitate the introductions. So she has made a point of trying to be proactive in this area. As she said, shadchanim are swamped and we have to try to help, all the while remembering with humility that shidduchim ultimately come from Hashem.

She related some of her more humorous experiences with trying her hand at matchmaking and described how one person’s poor set of priorities actually helped her to make her own son’s shidduch.

Along with the other two speakers, she reminded us that we have to be aware of the halachic guidelines concerning information we provide – particularly when it is not appropriate to divulge details about a young man or woman.

The second speaker was Lisa Elefant, a shadchan with Binyan Adei Ad. She told some stories of shidduchim and stressed that these days she is seeing a lot of misguided priorities. Very often she is asked questions that are not at all relevant to the girl or boy in question.

Parents should not be searching for mechutanim they will become buddies with. Why, she wondered, isn’t she asked if the girl has a kind heart and does chesed? And why has dress size taken on such importance?

Ms. Elefant stressed that while not everyone can be a shadchan, we all can do something. There are interesting programs such as SHARE: Shuls Helping Anyone Reach Everyone, and NASI, which encourages boys to marry same-age or older girls.

Everyone in the kehilla can get involved, she added, and mothers can network with each other.

Ms. Elefant feels we are rushing girls right after seminary into shidduchim. Many girls are not ready for marriage at that point but their parents pressure them in fear of their remaining single.

The final speaker was Sterna Lerman, supervisor and program coordinator for Counterforce. She asked us to try to imagine what it’s like being an older single. And then she did a remarkable role-play. She became “Chaya, a thirty-something single young woman.” She described the anxiety and fear older singles have and played the scenario so well that when she was back to being Sterna, all of us were trying to think of ways we might help an older single.

One of the most important things Mrs. Lerman discussed was the freezing of eggs. While acknowledging that a rebbetzin might feel uncomfortable suggesting this to an older young woman, she stressed that it is important to make them aware that after ages 35 to 38 their eggs are less viable and while they will hopefully meet their bashert, it might be difficult at a later age to have children. There are a number of organizations that help in this area.

When the conference and delicious lunch came to a close, we all left with a feeling of hope and a determination to do our part in alleviating the plight of our men and women searching for their life partner.

Hats off to Henna White, Faygie Zakheim, Judi Steinig, and the many others who contributed to once again making the Rebbetzins’ Conference a day to remember. 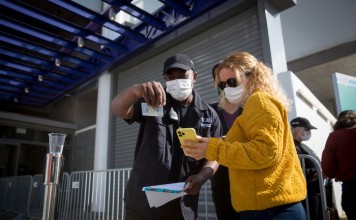