The long list of leading science fiction/fantasy writers who are Jewish includes Harlan Ellison, Robert Silverberg, Alfred Bester, Robert Bloch, and Avram Davidson who, according to Isaac Asimov, was “at least at one time – conspicuously Orthodox.”

But the dean of them all is arguably Asimov himself, an acknowledged grandmaster of science fiction and fantasy and one of the most prolific writers of all time, having written or edited more than 500 books.

Successfully pioneering the elevation of the genre from mere pulp-magazine adventure to serious literature, Asimov (1920-92) is credited with raising it to an intellectual level by incorporating history, sociology, mathematics, and science. He also wrote hundreds of short stories – among them Nightfall, voted by the Science Fiction Writers of America the best short science fiction story of all time (1964) – and critically acclaimed works on such diverse subjects as physics, chemistry, biology, astronomy, mathematics, limericks, humor, Shakespeare, Gilbert and Sullivan, ancient and modern history, and the Bible. 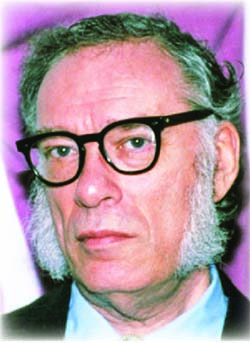 Asimov won three Nebula Awards and five Hugo Awards, including one for the Best All-Time Science Fiction Series (1966) for his Foundation Trilogy, and he received the Science Fiction Writers of America Grand Master award for lifetime achievement in science fiction/fantasy (1986).

Aside from the Foundation series, Asimov is perhaps best known for his “Three Laws of Robotics” which, first presented in I, Robot, govern the relations between robots and their human masters. This development was of such monumental import that writer Daniel Lapedus observes: “Einstein invented modern physics, Freud invented psychoanalysis, and Asimov defined the laws of robotics.”

Born in Petrovichi, Russia, to Orthodox Jewish parents and a family of millers, Asimov immigrated with his family to the United States, where his father, Judah, became secularized and abandoned teaching his son anything about Judaism. Although Judah served as secretary of a local synagogue, he did so only for the extra money, and young Isaac hated it when his father, as part of the job, occasionally dragged him to attend services.

He wrote of his father: “My father, for all his education as an Orthodox Jew, was not Orthodox in his heart,” adding that “he didn’t recite the myriad prayers prescribed for every action, and he never made any attempt to teach them to me.”

Although the family lived in an Orthodox Jewish neighborhood in Brooklyn, Isaac, who did not even have a bar mitzvah, grew up as a humanist and a rationalist with no strong religious influences. He attended Hebrew School for a short while, but he detested rote learning and saw no point in knowing Hebrew. Although he described himself first as an agnostic and later as an atheist, his fiction was never hostile to religion.

Notwithstanding his rejection of Jewish practice and his marriage to a gentile, Asimov remained sensitive to anti-Semitism and proud of his Jewish heritage. Moreover, he developed a lifelong interest in the Bible and, although he rejected the very idea of divine revelation as illogical, he distinguished himself from radical atheists by crediting “biblical writers and editors” for producing a meaningful and important text and by never disparaging the Bible or its followers.

He later authored several Biblical works, including Words of Genesis (1962) and Words from the Exodus (1963) – in which he cited Biblical passages and analyzed how these references entered the English language – and the ambitious and well-received Asimov’s Guide to the Bible (1968).

Other than his Biblical works, however, Asimov rarely wrote about Jews or addressed Jewish themes. This silence is probably because – as he explained in his foreword to Wandering Stars (1975) – science fiction involves “battles with space pirates, outer-world monsters and evil wizards” and “what kind of place [is] that for Jewish boys?” He added that he just didn’t think of Jews “in connection with robots, wrecked spaceships, strange worlds with six suns, and Galactic Empires.”

However, by the time of the publication of a sequel, More Wandering Stars, only six years later in 1981, he had completely changed his view: “[T]he Holy Writings lead the way to science fiction” and “[I understand] why there are so many Jewish writers of science fiction and fantasy, and why so many Jewish themes are used.”

It is difficult to argue that Asimov’s first novel, Pebble in the Sky (1950), is not conspicuously a “Jewish story.” The protagonist, Joseph Schwartz (Jewish name), is a retired tailor (Jewish profession) living on an Earth eons into the future which is populated by “an obstinate and stiff-necked race” (frequent Biblical Jewish characterization) who are reviled by uncounted trillions of people living on 200 million planets in the Galactic Empire (universal anti-Semitism) and who confront “the nearly insoluble problem of anti-Terrestrianism” because of their “blasted customs and traditions” (even more overt anti-Semitism). 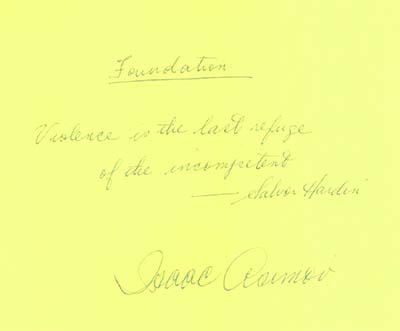 And in the exhibit shown here, Asimov pens a quote from his award-winning Foundation, considered by most critics to be his most famous and outstanding work: “Violence is the last refuge of the incompetent – Salvor Hardin.”

In Foundation, a colony (the “Foundation”) is established at the edge of the galaxy by a scientist who, having predicted the degeneration of the Galactic Empire into savagery, seeks to sustain the culture. Hardin is a crafty and cold-blooded politician and master manipulator who, as the first mayor of Terminus (the capital planet of the Foundation in the Foundation series), controlled and used the Terminus City Journal to exert great influence. He transformed his previously powerless office into the most formidable political position in the Foundation.

Because his strictly Orthodox parents spoke only Yiddish, Asimov remained fluent in the language throughout his life. Although, to my knowledge, he never wrote anything in “mama lashon,” he admitted that he had some of his characters in the Foundation Series use a Yiddish dialect. Moreover, Rabbi Gil Student, director of the Halachic Commission of the Rabbinical Alliance of America and book editor of the Orthodox Union’s Jewish Action magazine, makes a strong case for characterizing the cultural outpost in the Foundation Series as a “rough metaphor for the Jewish people in exile.”

It is also fascinating to consider the intriguing analysis on the Jewish underpinnings of Foundation by commentator Roger Price, who cogently argues that Asimov may have had Jewish history in mind when he established an alternate “Second Federation” at the other end of the galaxy, which could assume responsibility should the First Foundation fall. As Price writes:

The Kingdom of Israel could fall, but there was a Kingdom in Judah to absorb the immigrants and maintain the culture. Jerusalem could fall, but the prophets and priests, if not the royal family, in exile in Babylon would be instrumental in the restoration. The Second Temple could be destroyed, but Yavneh would live and then creatively change the very structure and thought of the Jewish world. Parallel communities would develop in the Iberian Peninsula and in northwest Europe, and if Sepharad were to be destroyed, yet Ashkenaz could flower. Later, America would be established as a homeland for Jews, among others, before European Jewry was decimated. And, after the devastation of World War II, a State of Israel would be born.

To that, I would add that one of the purposes of the Foundation colony in the first instance was to hopefully restore a Galactic Empire after thousands of years (the return of the Jewish people to Eretz Yisrael after a 2,000-year exile?)

In his memoir, Asimov writes that although he was never physically abused for being Jewish, he was occasionally attacked verbally by anti-Semitic “louts,” which he accepted as just the nature of things and deemed himself powerless to change. He accepted that, even in America, there were certain things that were closed to him because he was Jewish, but he had great difficulty handling the “permanent insecurity, and sometimes even terror” in the face of the Nazi genocide.

He was also deeply troubled by the growing anti-Semitism in America, where there was not only “an undercurrent of anti-Semitism” but also overt Jew-hatred, as expressed and broadly disseminated by the likes of Father Charles Coughlin and Charles Lindbergh. He expressed particular distress with the American government’s indifference to the wretched fate of European Jews.

On the other hand, in one famous (or infamous) incident, Asimov took umbrage with Eli Wiesel when, during a May 1977 discussion, Wiesel – “who survived the Holocaust and hasn’t spoken about anything else since” – declared that academics and technicians could not be trusted because they facilitated the Holocaust.

Characterizing Wiesel’s statement as an unacceptable sweeping generalization and, worse, as a remark that an anti-Semite might make (“I don’t trust Jews, because once, Jews crucified my Savior”), Asimov reprimanded him by answering: “[T]he fact that a group of people has suffered appalling persecution does not mean it is inherently good and innocent… If the Jews were in a position of strength, who knows if they wouldn’t become persecutors?”

When Wiesel responded by challenging Asimov to produce one single historical instance where the Jewish people had persecuted anyone, Asimov cited the Maccabees, when John Hyrcanus of Judea conquered Edom and forced the Edomites to convert to Judaism or face death. He added that he could have also mentioned “the fate of the Canaanites at the hands of the Israelites in the time of David and Solomon” and, continuing in his memoir, he went even further:

And if I’d been able to predict the future, I could have mentioned what is happening in Israel today. The Jews of America would have a clearer understanding of the situation if they could imagine the roles reversed: with Palestinians governing the country and Jews throwing stones at them with the energy of despair.

Asimov was no friend of Israel and, in fact, he rarely missed an opportunity to bash the Jewish state. For example, in his autobiography, he writes that:

I don’t travel. I really don’t, and if I did, I probably wouldn’t visit Israel. I remember how it was in 1948 when Israel was being established and all my Jewish friends were ecstatic, I was not. I said: What are we doing? We are establishing ourselves in a ghetto, in a small corner of a vast Muslim sea. The Muslims will never forget nor forgive, and Israel, as long as it exists, will be embattled. I was laughed at, but I was right. I can’t help but feel that the Jews didn’t really have the right to appropriate a territory only because 2,000 years ago, people they consider their ancestors, were living there. History moves on and you can’t really turn it back.

Asimov also bitterly criticized Soviet Jews: “They are fleeing their country because they fear religious persecution. But the moment they set foot on Israeli soil, they become Zionist extremists who are merciless toward the Palestinians. They change from persecuted to persecutors in the blink of an eye.”

He contended that it is not anti-Semitism to defend Palestinian human rights – proving, yet again, that even brilliant minds and gifted writers can be misguided or malicious.