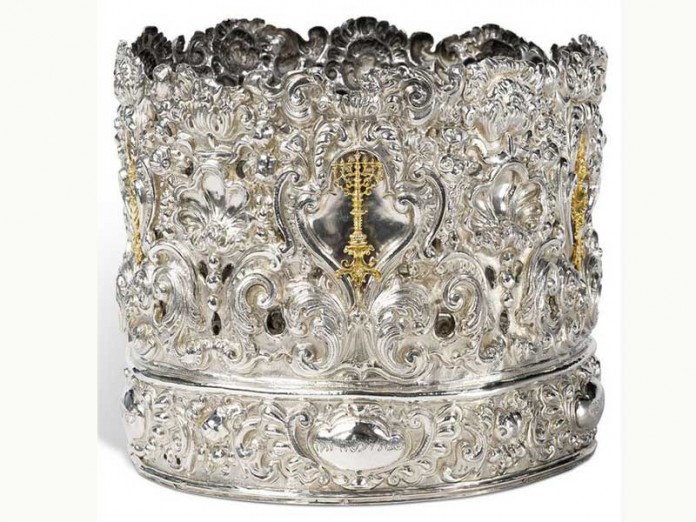 On June 16, Sotheby’s in New York held a Judaica sale that included items from various owners. Due to the pandemic, for the last two-and-a-half years, major auction houses such as Sotheby’s and Christie’s have made most of their auctions online only, with no bidding permitted live in person or even by telephone. In many instances, this pivot to relying solely on the Internet has been very successful. This recent Judaica sale was not only limited to online bidding, but it was “timed,” meaning every lot ended at a certain fixed time unless a bid was received, in which case the time left on the lot was extended for another five minutes.

While this sale had some standouts in terms of prices realized, many lots performed at or below expectations, with a fair number not selling at all, so in the end, the results of this experimental format were mixed. It remains to be seen if future Judaica auctions at Sotheby’s will continue down this route, or whether the online format will be abandoned, favoring the formerly standard trifecta of bidding live in person, telephone bidding, and also live Internet bidding.

The highest price realized for an item in the sale was on an 18th-century silver Torah crown from Italy. Assigned an estimate of $200,000-$300,000, it realized $478,000. Generally, when Jewish ceremonial objects of this quality and rarity are offered and the price they sell for is well above the high end of the estimate, it is due to an impeccable provenance. Curiously, for this crown, no provenance was given, indicating that it was likely a recent find, perhaps obtained by an antique dealer. The fact that such a healthy price was achieved with no provenance indicates that the quality and workmanship of this crown was beyond dispute.

The photos on Sotheby’s website indeed reveal that the workmanship of the silver is magnificent. The crown is embossed, chased, and pierced in high relief, with a symmetrical arrangement of shells enclosed by baroque foliage, large flowerheads, and fruit on matted ground, surrounding five deep cartouches on each of which is applied with a silver-gilt emblem a menorah, a laver held by a hand pouring water into a basin held by a second hand, a censer, a flaming altar, and finally, a representation of the Temple in Jerusalem. Similar crowns to this one are in museum collections, notably in Italy, and my sources tell me that two museums were battling each other for this crown, although at this time I have not heard which museum eventually won ownership. My guess is the Museum of Fine Arts in Boston, as over the last decade, they have spent millions of dollars acquiring the highest quality antique silver Judaica that appears in the marketplace.

The next lot that achieved a remarkable price was a complete set of a Shanghai-based Jewish periodical called Israel’s Messenger. All the volumes ever issued, beginning in 1904 and ending in 1941, were given an estimate of $30,000-$40,000, and they sold for $214,000. This lot had two things going for it. The first and most important is that it is the only known surviving complete set of this periodical. The second was the provenance, it having formerly belonged to David Solomon Sassoon, a member of the famous Iraqi-Jewish Sassoon dynasty. It is common knowledge that rare seforim and manuscripts, as well as letters signed by certain chassidic rabbis, can achieve sums at auction well into six figures. But for this grouping of early 20th-century printed material to have attracted such strong interest is a testament to the continued passion shared by collectors and libraries around the world for documentation when it comes to the history of the Jewish people, even when it is seemingly banal to a certain extent. 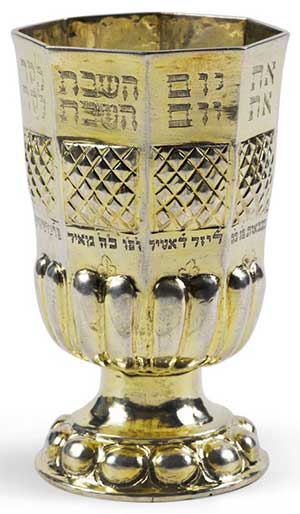 Another lot that did well was a silver kiddush cup made in Germany in 1715 with two Hebrew inscriptions engraved at different times in the 18th century. Given an estimate of $50,000-$70,000, it sold for $151,000. This octagonal formed cup is one of just a handful of known samples of this type of kiddush cup, with the others residing in Jewish museums in Europe. The large Hebrew inscriptions at the top near the rim read “Remember the Sabbath day and keep it holy” and “Observe the Sabbath day and keep it holy,” and are a stylistic match to the other large Hebrew inscriptions featured on the museum examples. There is a much smaller Hebrew inscription near the bottom of the cup that is quite lengthy which states: “Bestowed as a ‘sermon gift’ from the community of Frankfurt under the gabbai-ship of the parnas and leader, Mr. Leizer Leiter, and the parnas and leader, Mr. Mayer Floersheim, in the year 1778.” The term “sermon gift” is used to refer to an item given by the community to a bridegroom on the Sabbath before his wedding, or to a bar mitzvah boy on the Sabbath of his bar mitzvah, when each of them was expected to deliver a public sermon in the synagogue.

In addition to being a spectacular, truly rare, and early example of a German kiddush cup, this item has a provenance of it being handed down for generations in a Jewish family hailing from Frankfurt who escaped Germany to England before the Second World War. This kiddush cup now holds the record for achieving the highest price ever for a kiddush cup at auction.

Finally, this last item, an Iraqi wooden Torah case mounted in silver and dating to 1876, sold for the incredible price of $126,000, against an estimate of $10,000-$15,000. Sephardic Torah cases built like this are known as a tik. They are not rare, and frequently appear in the marketplace, with the price is dictated by the quality of decoration in the silver, the age, which tends to be from the late 19th or early 20th century, and the country of origin. To my understanding (and apparently, the experts at Sotheby’s), this is a pleasing but typical example of a tik, and the estimate of $10,000-15,000 was appropriate. Why did it reach a sum of ten times the estimate? I reached out to colleagues and all were baffled, as I am. There is an inscription in Hebrew on the inside of the case which reads “This tik and the Torah scroll inside it are consecrated for the elevation of the soul of the noblewoman Señora Rachel, who died before her time, by her wise, understanding husband Elijah Hazzan, may G-d keep and protect him, and his son, Señor Moses, may G-d keep and protect him. May the blessed G-d lengthen their days in happiness and their years in delight. So may it be His will, amen.”

My best guess as to why this tik achieved such a remarkable sum is the usage of the words “Señora” and “Señor,” which indicates that this Iraqi-made Torah case was dedicated in a Spanish-speaking country in 1876, such as… Spain. Or Portugal. Jewish ceremonial art from those countries, to my recollection, hardly, if ever, appear for sale, so perhaps this Torah case was recognized as an important scarcity in that aspect, and hence, a fierce bidding war between two (or more?), parties ensued. If any readers have a definitive answer, please contact me, and I will share your knowledge in a future column.

Shana Tova to all!