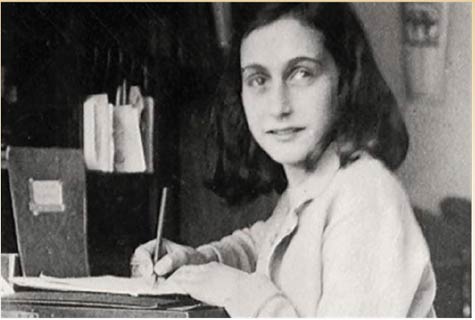 263 Prinsengracht Street in Amsterdam, Holland, is known throughout the world as The Anne Frank House. It is where Anne’s father, Otto, had his business before the war and where Anne and her family along with the Pels Family and Fritz Pfeffer hid for over two years until they were captured and sent to concentration camps.

Otto Frank was the only one to survive the war and he published Anne’s dairy which had been written while they were in hiding. Hundreds of thousands of people visit the house each year and are touched by the tragic story.


Anne was born on June 12, 1929, in Frankfurt am Main, to Edith and Otto Frank. She had one sister, Margot, who was three years her senior. The family and Mr. Frank’s businesses moved to Amsterdam in December of 1940.

In May 1941, to prevent the occupying forces from designating a Verwaleter, a deputy, to take his place as head of the company, Otto Frank stepped down as director and appointed office staff member Johannes Kleiman in his stead.

“After May 1940 good times rapidly fled: first the war, then the capitulation, followed by the German invasion which is when the sufferings of us Jews really began. Anti-Jewish decrees followed each other in quick succession and our freedom was strictly limited.”

On July 5, 1942, Margot Frank was to report for deportation; the family went into hiding the next day, secluding themselves in a secret annex above Mr. Frank’s business, which was not visible from the front of the building. The warehouse was on the ground floor extending all through the building and under the annex in the back. The offices and the storeroom were upstairs. The warehouse workers did not know about the people hiding in the annex.

“We have to whisper and tread lightly during the day, otherwise the people in the warehouse might hear us.”

On July 13, 1942, Mr. And Mrs. Van Pels and their son Peter joined the Franks; Fritz Pfeffer moved in the following November. Both the Pels Family and Fritz Pfeffer had escaped from Germany. There were eight people in all hiding in the annex.

“Countless friends and acquaintances have been taken off to a dreadful fate. Night after night, green and gray military vehicles cruise the streets. It is impossible to escape their clutches unless you go into hiding.”

While the office personnel, also known as The Helpers, kept those in hiding supplied with food, books and newspapers, as the war progressed it got harder and harder. Margot and Anne sometimes snuck down to help with the clerical work where the staff did everything they could to keep things as normal as possible.

“On Thursday night I was downstairs with Father drawing up the debtors’ list in Kuglers office. It was very creepy down there and I was glad when the work was finished.”

“Miep has so much to carry she looks like a pack mule. She goes forth nearly every day to scrounge up vegetables and then bicycles back with her purchases in large shopping bags.”

There was a movable bookcase that concealed the entrance of the annex and the windows of the landing were covered with dense semi-transparent glassine paper which hid the back part of the house from view.

“Now our Secret Annex has truly become secret. Mr. Kugler thought it would be better to have a bookcase built in front of the entrance to our hiding place. Now whenever we want to go downstairs we have to duck and then jump.”

In the room in which Edith and Otto slept with Margot, there is a map of Normandy. When the Allies landed, Otto tracked the progress of the invasion on it. There are also pencil marks on the wall to indicate how much Margot and Anne grew in hiding.

“’This is the Day’ came the announcement over the English news at twelve o’clock. The invasion has begun! English parachute troops have landed on the French coast. Great commotion in the annex! Would the long awaited liberation ever come true?”

Anne and Fritz Pfeffer shared the adjoining room and it was at the narrow table in the room that she wrote in her dairy. It had been a birthday present when she turned thirteen. She wrote mostly about her personal thoughts and feelings, the isolation, and the constant fear of being discovered. She pasted all kinds of images onto the wall of her room to make it more cheerful.

“Our little room looked very bare at first with nothing on the walls; but thanks to Daddy who had brought my film star collection and picture postcards on beforehand, and with the aid of a paste pot and brush, I have transformed the walls into one gigantic picture. This makes it look much more cheerful.”

“I saw two Jews through the curtains yesterday, it was a horrible feeling, just as if I had betrayed them and was now watching them in their misery.”

The common room, where the eight people spent most of their time, was also where Mr. and Mrs. Van Pels slept.

There was a narrow space where Peter Pels had “his own room.” There were stairs that led to the attic, which was used for storing food supplies. Anne and Peter spent a lot of time in the attic; from the window they could get a glimpse of the chestnut tree outside.

During the day the people in the secret annex had to use the toilet and sink as little as possible. The water and drainage pipes ran through a wall in the warehouse, and there was a chance workmen could hear them.

“Our own helpers, who have managed to pull us through so far. Never have they uttered a single word about the burden we must be.”

“As of tomorrow, we won’t have a scrap of fat, butter or margarine. Lunch today consists of mashed potatoes and pickled kale. You won’t believe how much kale can stink when it is a few years old!

On August 4, 1944, the German Sicherheitdienst (Security Police) arrested and imprisoned the Franks, the Pels, Fritz and helpers Jo Kleiman and Victor Kugler. The Nazis emptied the annex of all furniture, and for this reason, Otto Frank wanted the Secret Annex to remain unfurnished after the war. Jo Kleiman and Victor Kugler were imprisoned in Amsterdam and transferred from there to the Concentration Camp Amersfoort in Holland. All the helpers survived the war; to this day, no one knows who betrayed them.

The eight were taken to Westerbork in August 1944. On September 3, 1944, they were all transferred to Auschwitz. Mr. Hermann Van Pels was killed there a few weeks later. In October 1944, Anne and Margot were transferred to Bergen-Belsen.

Otto Frank was liberated from Auschwitz by the Russian army on January 27, 1945. In June of that year he returned to Amsterdam and in the summer of 1947 published the diary which had been found by the helpers and kept for whomever would return.

The Anne Frank House was set up in May of 1957; Otto was actively involved in making the secret annex accessible as a museum. In the autumn of 1958, the restoration of 263 Prisengracht began. On May 3, 1960, the museum was officially opened.

The Secret Annex has been preserved in its authentic state. The front part of the building and the offices where the helpers worked have been restored to the style of the war years. Quotations from Anne’s diary, photographs, and original objects belonging to the people in hiding and the helpers are displayed throughout the museum and serve to illustrate the events that occurred. Anne’s diary is on display in the museum along with some of her other original notebooks.

“When I write I can shake off all of my cares. My sorrow disappears, my spirits are revived!