Purim celebrations in Tel Aviv, which began in 1908, were the largest public events in Eretz Yisrael during the British Mandate period and an important exemplar of Jewish culture. The sometimes outrageous carnivals became both a source of pride to the citizens of Tel Aviv and a broader demonstration of the accomplishments and capabilities of the new Jewish state-to-be.

The Purim carnival – “Adloyada” – was held annually until 1914, when it was discontinued due to WWI; it resumed in the 1920s and was held every year until the Arab revolt of 1936-39. The term “Adloyada” is a condensed version of Ad Delo Yada (“until one no longer knows”), the rabbinical standard of how much one should drink on Purim.


The first Purim parade, initiated by teacher Avraham Aldema (né Eisenstein), was held in Tel Aviv in 1912 and featured costumes and pranks, masks and puppets, marching bands, and children in wild Purim costumes. Before the 1926 celebration, the Tel Aviv City Council joined forces with the Jewish National Fund to formally organize the event, and a Committee for Purim Projects was charged with planning the program, coordinating the decorations, advising on pageant preparation, and setting the order of the procession.

Later, in 1929, the Committee suggested that input from various artists and engineers be sought regarding the establishment of a unified theme for the celebration; accordingly, Mayor Dizengoff wrote to various artists:

This [Purim] carnival attracts large numbers of people but, to our regret, we must admit that last year it had no content, neither historic nor artistic. I would be very glad if you would agree to introduce a theme into the carnival, something that would satisfy every requirement, insofar as art, beauty and history are concerned. It would be a good idea, for example, if we could arrange parades based upon the Holy Scriptures, the Bible and Jewish history in general. There were some suggestions to organize parades with the theme of Miriam, Deborah the Prophetess, and the like. Others suggested a scene based on the motif “Sun, stand still at Gibeon and moon in the Valley of Ayalon” or “Moses on Mt. Nebo.”

According to Staging and Stagers in Modern Jewish Palestine by Yaacov Shavit and Shoshana Sitton, the 1923 Purim parade began with the reading of Megillat Esther in the Great Synagogue on Allenby Street. Athletes walked along the streets and announced, to the blare of trumpets and the roar of multitudes, the parade of “Queen Esther,” who arrived wearing royal garb and her crown at City Hall, where the mayor escorted her to the balcony overlooking the square and proclaimed her queen of the city.

The next day, the mayor, decked out in top hat and cane, led the parade on horseback accompanied by mounted attendants, followed by “Queen Esther” in a lavishly decorated “royal carriage.” Following behind were other characters from the Megillah, figures representing the tribes of Israel, and wagons carrying and toting assorted floats.

Shavit and Sitton describe the 1929 program as follows:

Monday
7:00 p.m. Bonfires at various points in the city to announce the opening of the festivities.
7:00 p.m. HaPoel in a comic parade with torches – public dancing in the streets.
7:30 p.m. HaMaccabee in a comic parade, with torches.
7:30 p.m. Tel Aviv mayor’s official reception of “Queen Esther” at City Hall… After being received, the “Queen,” escorted by her honor guard, will leave the city and return to her home.
The police orchestra will play during the Queen’s reception at City hall.

Tuesday
10:00 a.m. A procession of kindergarten children, accompanied by the police orchestra and Brit-Trumpeldor.
1:00 p.m. HaMaccabee parade…mock athletic parade will be held.
1:30 p.m. HaPoel in a comic parade…games, comic gymnastics and soccer matches.
3:00 p.m. A parade of mothers with decorated baby carriages – the orchestra will play during the parade.
6:00 p.m. Organized parades from the Maccabee and HaPoel fields.

Wednesday
9:00 a.m. Foot race.
2:00 p.m. The carnival.
2:00 p.m. “Queen Esther” will appear with her entourage and honor guard. The parade, led by the Queen, will then pass through the streets… At 48 Allenby Street, there will be public dancing to the music of an orchestra.

In the early 1930s, the city retained artists to decorate the city and to build scenery, including painted gates based upon Megillat Esther. The parade route had to be extended because the municipality had significantly expanded northward during the previous decade and the route now had to accommodate many more tens of thousands of observers and participants.

The parades included historical and satiric subjects; street names were temporarily changed to Purim-related names (see below); and the entire city was converted into one grand street theater. Following the parade, everyone joined in the “Tel Avivya,” a folk dance created especially for the occasion.

After the Adloyada of 1930 was canceled because of the August 1929 Arab riots, the 1931 Purim Committee published a pamphlet entitled A Guide for the Festivities and the Carnival, including a program of the festivities, rules for spectator behavior, and a list of prices. Chaim Nachman Bialik, who was heavily involved in the Committee organization effort, was also an active member of the panel of judges for the Purim competitions.

In this February 18, 1931 correspondence on his Mayor of Tel Aviv letterhead, Dizengoff writes to the head of the Hadera Moshava: 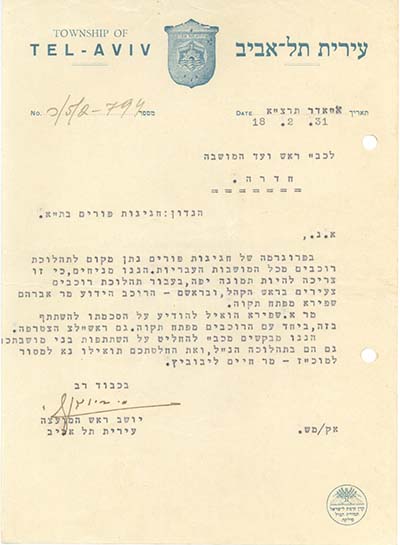 The program for the Purim Chagiga has allocated space for a parade of riders from all the Jewish Moshavot. We hereby permit, because this is necessary to facilitate a beautiful scene, for a procession of young riders at the head of the community, and at their head – the well-known rider, Mr. Abraham Shapira from Petach Tikva.

Mr. A. Shapira kindly advised us of his consent to participate in this, together with the riders from Petach Tikvah. Rishon L’Tzion also has joined.

One of Israel’s most colorful early characters, Shapira (1870-1965) – better known as Zkan HaShomrim (“The Eldest of the Jewish Guards,” the first self-defense force of the Yishuv) – was one of the legendary heroes of the First Aliyah. In one famous incident, he single-handedly apprehended and brought to justice a leading Moslem and three compatriots who, while drinking, had killed a Jew.

A founder of Petach Tikva, he led a successful attack against an Arab raid that saved the lives of citizens walking to synagogue for Friday evening Shabbat services in May 1921. He came to symbolize the new generation growing up in a new homeland: fearless, proud, and independent.

Not surprisingly, some critics considered the Purim celebrations to be an embarrassing overindulgence and a needless waste of public funds. The charedi community strenuously objected to what it characterized as unrestrained permissiveness and vulgarity, as a result of which the municipal authorities canceled the ceremony to select “Queen Esther” that had been held from 1926 to 1931.

Shown here is a very rare document issued by the Purim Committee just prior to Rosh Chodesh Adar, which marks the beginning of preparations for the Purim celebration: 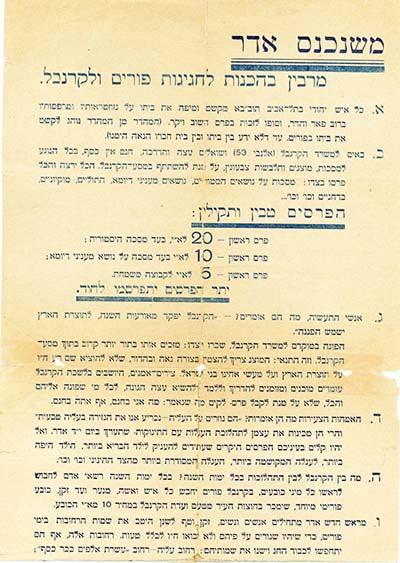 1. Every Jewish person in Tel Aviv, may it be re-established and speedily in our days, amen, is decorating and beautifying his home – his balconies and terraces – with great splendor and grandeur, which will result in winning an important and valuable prize. (The practice of the most meticulous in his observance is to decorate his home on Purim, until he cannot distinguish between his own home and the house of his neighbor that is even more pleasant than his.)

2. Come to the offices of the carnival (at 3 Allenby Street) and ask advice and instructions, at no charge, as to anything relating to masks, displays, and colorful clothes, to participate in the carnival parade. Anything goes, and everything will be deployed alongside: historically-themed masks, current events themes, comical, clownish, entertaining, etc. etc.

4. The young mothers…prepare themselves for the parade of babies that will be arranged for on the 14th of Adar. And let not the valuable prizes be unimportant in your eyes that are destined to be awarded to the healthiest child, the most attractive child, to the best-decorated pram….

6. From the first day of Adar, men and women, children and senior citizens, should learn well the names of the streets during Purim so that these names will be fluent to them and so they will not, heaven forbid, err. These streets will have their names changed:

In 1932, the festival was initiated by trumpeters atop the houses lining the main street; an “electric flame” opened the celebration; and two sets of criers carrying amusingly adorned torches and signs with verses from Megillat Esther walked through the streets accompanied by an orchestra as they summoned the public to the opening ceremony.

The second day of the festivities included a parade of babies, representing the bright future of the yishuv; a street concert and a wandering choir; and satiric street boxing matches and lively folk dancing. The third day activities included a foot race and a bicycle procession.

The 1933 parade featured a Hitler puppet atop a horse with a sign around its neck proclaiming, “Kill Jews” next to two Jews shown bleeding to death. The outraged German consul filed an official protest demanding an apology from Mayor Dizengoff. Dizengoff not only refused to apologize, a year later he permitted a huge puppet with a swastika on its back to march in the parade. The Purim carnival was frequently used as a public opportunity for political expression, including protests against British policy in Eretz Yisrael.

In January 1934, the Committee essentially withdrew from arranging the celebration and, after 1936, the increasing security issues in Eretz Yisrael and a dispirited national mood precluded the continuation of large outdoor festivities. After Israel’s victory in the War of Independence, outdoor public festivities resumed, but the massive public gala was essentially transferred from Purim to Independence Day.

Wishing a happy and healthy Purim to all! 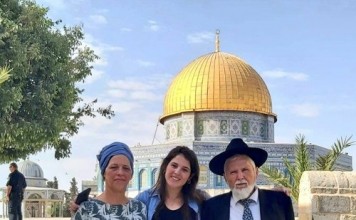