Mention Shanghai and the Holocaust, and most of us think of the Mir Yeshiva. That’s our immediate association. And yet, Shanghai was also home to students from yeshivas such as Lubavitch and Chachmei Lublin. There was also a sizable Sefardi community. In fact, the very first Jews to settle in Shanghai in 1840 were Sephardic families from Baghdad, Cairo and Bombay. They left their homes due to the treaties enacted following the Opium Wars.  These original residents were wealthy Jewish merchants and traders, including the Sassoon, Hardoon and Kadoorie families.  By the late 1880s, there were actually seven active synagogues in Shanghai.

The second wave of Jewish immigrants settled in Shanghai in the 1920s, joining the existing community of approximately 1,700. These were Russian Jews fleeing the pogroms and restrictive policies in the Pale of Settlement. The 1917 Russian Revolution spurred immigration, as did the Japanese occupation of Manchuria in the 1930s.  The Russian community originally numbered 4,500. At its height, it reached 10,000 members.


In 1926, the Russian Jews in Shanghai invited Rabbi Meir Ashkenazi, a member of the Chabad-Lubavitch movement, to lead their community. Greatly respected and loved for his ceaseless efforts on behalf of all Shanghai Jewry, he led the community until he immigrated to New York in 1949.

During World War II, many Jews, desperately seeking refuge, wound up in Shanghai. The city sheltered an estimated 20,000 Holocaust refugees during that time period. With no passport or visa requirement for entry, it became a relatively safe haven.

Following the Japanese invasion of China and occupation of Shanghai in 1937, there was intense pressure from the Nazi government to promote their anti-Semitic policies in Asia. In 1943, the Japanese came up with a plan to appease their German allies – Jewish refugees that arrived in 1937 and afterwards would be confined to the Hongkew district ghetto. Conditions were exceedingly difficult. It was extremely crowded. The climate was brutal. Yet, an amazing social welfare system was established through the efforts of the original Shanghai Jewish community, providing the new refugees with food through soup kitchens and necessary medical care. Schools were established, young couples married, had children and life went on.

At the end of the war, most of the Jewish refugees immigrated to Israel, the United States and Australia.  Two of the synagogues in Shanghai still stand today.  The current exhibit at Amud Aish Memorial Museum recalls the Holocaust years in Shanghai and the incredibly diversified Jewish community that carried on then, despite great travail.

Adults visiting the exhibit, with the guidance of a trained docent, learn about the many fascinating aspects of the extended Jewish community in Shanghai.  School groups explore the exhibits and then further their understanding through the workshops offered through Amud Aish’s educational branch. Miryam Gordon, Program Coordinator of Amud Aish, emphasizes that children often learn best using non-traditional methods. Hands-on activities reinforce the lessons.

On my recent tour of the museum, temporarily located in Mill Basin, Brooklyn, I took note of the delicate butterflies children had crafted on their own, after studying a moving poem entitled “The Butterfly,” and written by 21-year-old Pavel Friedman while he was interned in Theresienstadt. Pavel was later sent to Auschwitz where he was tragically killed on September 29, 1944. Here is the poem.

The last, the very last,
So richly, brightly, dazzlingly yellow.
Perhaps if the sun’s tears would sing
against a white stone…

Such, such a yellow
Is carried lightly ‘way up high.
It went away I’m sure because it wished
to kiss the world goodbye.

For seven weeks I’ve lived in here,
Penned up inside this ghetto
But I have found my people here.
The dandelions call to me
And the white chestnut candles in the court.
Only I never saw another butterfly.

That butterfly was the last one.
Butterflies don’t live in here,
In the ghetto.

Amud Aish takes great pride in these professional workshops, enabling children, each on their own level, to relate to the Holocaust. The Holocaust may now be history, 70 years later, but it’s our history; it’s the history of our parents and grandparents. It’s his-story, the story of our loved ones, and we dare not let those memories be forgotten. Amud Aish engages its visitors through multi-dimensional learning models. Students explore original historical artifacts and documents. All docents and educators encourage inquiry-based conversations that foster curriculum connections and critical thinking.

Additionally, in order to engage these youngsters, each year Amud Aish hosts a Student Visual Arts and Literacy Contest. Attractive brochures are sent to hundreds of yeshivas and schools. These brochures contain photos and details of various items in the exhibit, inviting students to create their own visual artwork or literary artwork based on those items.  Amud Aish receives thousands of entries. The winners receive prizes and their entries grace the walls of the museum.

A current workshop features replicas of authentic mementos from the life of Yehudith Cohn Goldbart.

Yehudith was born in Germany and, as a young girl, miraculously made her way to Shanghai with her family.  She became a student of the Bais Yaakov school established in Hongkew. Ultimately, 160 young girls were enrolled in this Bais Yaakov, initiated and run by former students of the formidable Frau Sarah Schneirer: Rebbetzins Chana Gorfinkel, Yenta Mannes, Basya Safran and Chaya Bluma Hellman.  Yehudith was so enamored and moved by the teachings that she herself aspired to become a Bais Yaakov teacher.

At the close of the war, Yehudith hoped to qualify as a student and immigrate to the United States. However, the US Immigration Act of 1924 had imposed strict quotas on immigration. Yehudith required a sponsor to sign an affidavit assuming responsibility for her.

Across the ocean, Rabbi Boruch and Rebbetzin Vichna Kaplan opened a small Bais Yaakov for older girls in Williamsburg, New York. In August of 1946, Yehudith received an acceptance letter from Rabbi Kaplan to the Bais Yaakov Seminary in NY. In the letter, he stated that his Bais Yaakov would assume full financial responsibility for her.

However, the US State Department rejected Yehudith’s application and the Cohns’ remained stranded in Shanghai. As many others left, Yehudith assumed a major role as a teacher in the Shanghai Bais Yaakov.

Her family was finally able to leave Shanghai on March 20, 1947, sailing to the West Coast of the US.

On April 29, 1951, Yehudith married Hershchel Zvi Goldbart, an Auschwitz survivor. They settled in California. Sadly, they had no children, but Yehudith, fired up with a passion for Torah and Yiddishkeit, kept her inner fire burning. She cared for Ethiopian families and promoted Shabbos observance by promoting a program called SOS – Save Our Shabbath.  When she died in 2007, her family found a treasure trove of 200 items; mementos and testimonies from her years in Shanghai, including immigration papers, report cards, wedding invitations, newspaper clippings, and graciously donated these items to Amud Aish.

In 2014, Amud Aish hosted a magnificent program that revolved around this particular collection (a video of the program can be purchased on it’s website). Among the speakers was Ms. Chevi Garfinkel, a popular, beloved Bais Yaakov teacher, whose grandmother was the guiding force behind the Bais Yaakov in Shanghai.  Ms. Garfinkel’s concluding words still ring in my mind: “What is the legacy of the Bais Yaakov movement? It’s a family business!! Passed down through generations!! Love of Hashem, love of His Torah, and love of one another!!”

Yehudith Cohn Goldbart certainly absorbed these messages and took the legacy of Bais Yaakov very seriously. Upon relocating to California, she took the initiative and established a Bnos group, providing weekly Shabbos gatherings for many young girls.  Always living b’simcha, with tranquility and happiness, she would teach her students using songs and games. She mindfully related stories of our Gedolim, as well as stories of her own personal mentors, her beloved Bais Yaakov teachers. She transmitted the values they had lived for and imparted to their own students. She served as a fabulous role model of Torah observance to many.

With the many personal artifacts in this collection, this special woman is once again able to have an impact on many, including myself!! May we take her messages to heart and continue to impart this legacy to future generations with the same love and passion that she exhibited.

(Some of the historical information in this article was taken from the ‘Jewish Times Asia’, an online community publication, Nov. 21, 2017.) 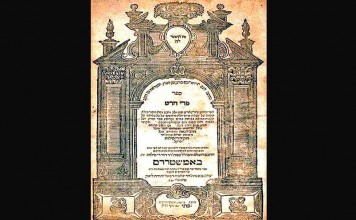