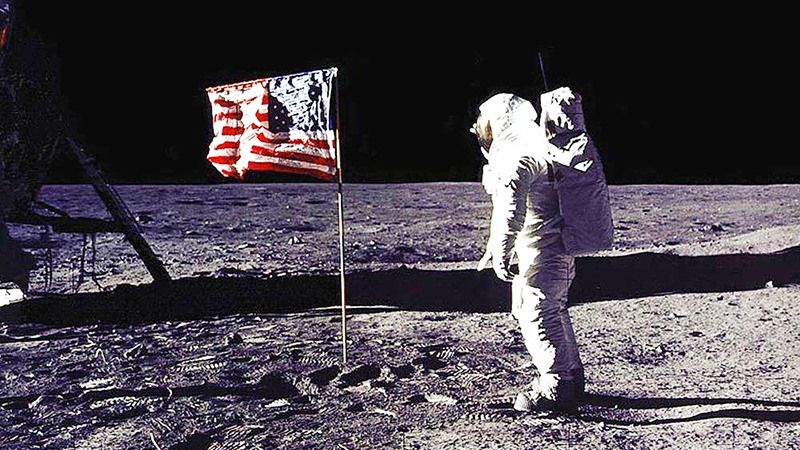 Shabbos – July 20 – will mark 50 years since man first walked on the moon, a feat fantasized about since ancient times.

It was a triumph of human ingenuity that united all of mankind and gave America a brief respite from the turmoil tormenting the country in the summer of 1969 – a summer of mayhem (the Manson murders), music (the Woodstock retreat), and marches (against the Vietnam War).


I missed all of that. I was in Israel that summer, not yet bar mitzvah. I recall standing on July 20, 1969, with many others, on a street corner in Netanya looking at grainy black-and-white television images of man’s first steps on the moon. The excitement was palpable. The moon was our gateway to space and the universe beyond.

And then, oddly, the attraction of landing men on the moon faded quickly. No man has touched the moon’s surface since 1972. What happened? And is there a Jewish perspective on the matter?

The scope of the moon program and its ancillary achievements are astonishing. More than 400,000 people worked on NASA’s moon program, and many inventions that have since transformed our world were byproducts of it. Scratch-resistant lenses and anti-icing equipment were invented by NASA scientists, and Velcro, microchips, and MRIs were first put to effective use in the space program.

The Apollo 11 astronauts were flying into uncharted territory. All precautions were taken, but the slightest mishap could have taken their lives. President Nixon had a failure speech prepared in case Neil Armstrong and Buzz Aldrin were stranded on the moon in which he planned to laud their courage and inspiring example.

Indeed, it was not known for many years that while the astronauts exited the Eagle moon landing craft, one of their backpacks broke the switch on the computer that armed the engine! Fortunately, Buzz Aldrin replaced the switch with a simple pen he had brought with him – and two astronauts were able to later leave the moon as scheduled.

Strange as it sounds, Jews have always had a special relationship with the moon. We are compared to the moon (Midrash Tehillim 22) and count our months according to the moon’s cycle (Sukkah 29a). The moon was singled out for creation on the fourth day, and is the only element of creation that perceptively changes shape before our eyes every day, waxing and waning every month and thereby meriting its own berachah upon its monthly reappearance.

It seems so close and yet so unreachable that the tefillah of Kiddush Levanah states about the moon: “eini yachol lingoa bach – I cannot touch you.” And yet, touch it we did. One rabbi quickly opined after July 20, 1969, that we should no longer recite that phrase, but he was overruled. For all but 12 men, the moon has remained untouchable, part of our world but literally beyond our grasp.

Poskim at the time also debated whether observing mitzvot on the moon was obligatory; some claimed mitzvot must only be performed “on the earth” (Devarim 12:1). That proposal never got off the ground. A joke also circulated about the Jewish astronaut who reported on the difficulty of his mission orbiting the earth: “It was amazing, except that every 70 minutes I had to daven Shacharit, Mincha, and Maariv all over again.”

(Over the years, there have been more than a dozen Jewish astronauts – Americans, Israelis, and one Soviet Jew, Boris Volynov, who in January 1969 became the first Jew in space.)

Neil Armstrong’s first step on the moon was exhilarating, but the next moon landing four months later drew much less attention. By 1972, missions were being canceled due to budget cuts. The late Eugene Cernan is the last human to have walked on the moon – on December 17, 1972. Almost as quickly as man arrived, he determined that there was no reason to return. Why?

Great moments of joy are often followed by emotional deflation. A feat, once achieved, no longer energizes. We remember the first person to do something – not so much the second and not at all the tenth. The space program stumbled in this essentially human way – the sense of “been there, done that, now what?” The mystique and enchantment of the moon landing fell victim to cost-benefit analyses and financial constraints.

And perhaps this, too: American culture in the 1960s and 1970s eroded the nation’s moral core, and government failures – ethical, military, diplomatic, and economic – sapped the people’s trust in the traditional institutions of American life. The contrast between the harmony in the heavens and the chaos on earth – wars, massacres, and human misery – was too glaring to justify spending resources on space without any immediate benefit.

Americans were also so caught up in the throes of a consumerist and increasingly libertine society that they prioritized pursuit of pleasure in the present over adventure in the great beyond.

Of course, there was, and is, another way to view the history of the space program and why the 50th anniversary of the first moon landing evokes such nostalgia and good feeling. The grandeur of the universe reminds us of the smallness of mankind, inspiring humility in the face of the Creator and His creation:

“When I see Your heavens, the works of Your hands, the stars and the moon that You brought into existence. What is a human that You are mindful of him, the son of man that You remember him? Yet You made him slightly less than the angels and crowned him with glory and splendor” (Tehillim 8:4-6).

The astronauts reported that in space Earth looks so small and peaceful. If only we embraced that perspective. If we did, our humility, ingenuity, and commonality would impel us to imbue this planet with G-d’s presence and obey His will. For one fleeting moment 50 years ago, such a perspective was possible, and we owe eternal gratitude to those whose courage revealed for all the extraordinary frontiers of human potential.