In February 1861, Abraham Kohn, one of the founders of Chicago’s Congregation Kehilath Anshe Maariv and at the time the city clerk in the administration of Mayor John Wentworth, presented Abraham Lincoln with a unique American flag. In the white bars of the flag Kohn, in his own hand and in Hebrew, had inscribed verses 4 through 9 of Joshua I, namely:

Verse 4: From the wilderness, and this Lebanon, even unto the river, the river Euphrates, all the land of the Hittites, and unto the Great Sea toward the going down of the sun, shall be your border.

Verse 5: There shall not any man be able to stand before thee all the days of thy life; as I was with Moses, so I   will be with thee; I will not fail thee nor forsake thee.

Verse 6: Be strong and of good courage; for thou shalt cause this people to inherit the land which I swore unto their fathers to give them.

Verse 7: Only be strong and very courageous, to observe to do according to all the law, which Moses My servant commanded thee; turn not from it to the right hand or to the left, that thou mayest have good success whithersoever thou goest.

Verse 8: This book of the law shall not depart out of thy mouth, but thou shalt meditate therein day and night, that thou mayest observe to do according to all that is written therein; for then thou shalt have good success.

Verse 9: Have I not commanded thee? Be strong and of good courage; be not affrighted, neither be thou dismayed; for the Lord they God is with thee whithersoever thou goest.[i]

Who was Abraham Kohn and how did he come to so admire Abraham Lincoln that he was motivated to make this presentation?

Kohn “was born in Bavaria in 1819 and came to America in 1842.Like many other German Jews beginning to feel the effects of repressive measures directed against them, he came to America, the land referred to in Germany as das gebentschte Land—the blessed land. Abraham Kohn and his brothers, Moses and Judas, engaged in perhaps the most common occupation of immigrant Jews of that time, peddling merchandise from house to house.”[ii]

Abraham remained a peddler in rural New England for a relatively short time and, less than two years after his arrival in America, was already living in Chicago as the proprietor of a store. Kohn kept a diary in German of his experiences as a peddler.

“Fortunately, the diary mirroring the heartaches and hardships that fell to his lot has been preserved. It is a valuable but hitherto unpublished document that furnishes insight into the life and emotions of a young man who set out to make his fortune overseas. It reveals clearly the sensibilities of the author. His fine Jewish background comes to the surface in a variety of Hebrew allusions used with the original German. There is a graphic picture of what it meant to cross Germany on foot from Bavarian to Bremen in the old days and what grim privations were endured on the Atlantic voyage.”[iii]

Abraham Kohn can perhaps be considered the quintessential Jew of an appreciably large class of Jews who had immigrated to America in the middle 1800s. After his early struggles he became successful in business, was devoted to his synagogue, and was active in public life.

“It was during the presidential campaign of 1860 that Abraham Kohn, City Clerk of Chicago, first met Lincoln, the acquaintance being formed in the store of Kohn, at that time a merchant. In politics Kohn was described by the Democratic press as ‘one of the blackest Republicans and Abolitionists.’ Kohn’s popularity and influence had probably been brought to Lincoln’s attention, and the latter, consummate politician as he was, recognized in Kohn, presumably, an ally whose acquaintance would prove a valuable asset in the pending election. Lincoln was introduced by Congressman Isaac N. Arnold who accompanied him and it was this meeting that inspired Kohn with a feeling of admiration for his visitor and a conviction that he was the destined Moses of the slaves and the saviour of his country. Thus says his daughter, Mrs. D. K. Adler, in a letter to the writer. Lincoln in the course of the conversation spoke of the Bible as their book and Kohn, being a devout Jew as well as an ardent patriot, conceived an intense admiration for Lincoln. This found expression in his sending to the President-elect before his departure for Washington a silk flag, the work of his own hands, painted in colors, its folds bearing Hebrew characters exquisitely lettered in black with the third to ninth verses of the first chapter of Joshua. 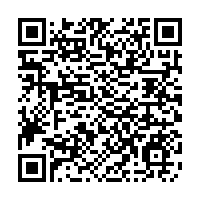