An article that I read recently in The Jewish Press agitated and upset me tremendously, because I know the writer was not embellishing the situation she described. Rebbetzin Miriam Gross, in her Inspirational Angles column, entitled “Domestic Discord and Children” (December 21), wrote that from a very early age, children observe and absorb even the tiniest details of their parents’ behavior. She stated that the greatest gift parents can give their kids is peace in the home, and acknowledged that to achieve this cherished outcome requires constant self-discipline and control.

Rebbetzin Gross repeated a story from a kindergarten teacher who was quite upset when she shared it with her. The teacher had been sharing with her students the virtue of helping prepare the home for Shabbat, and that even great rabbanim would joyfully do menial tasks like sweeping the floor to participate in getting the house ready. Excited, some of the students shouted out the household chores their fathers would engage in. Some cooked, washed dishes, or prepared the candles. As Rebbetzin Gross writes, quoting the morah,  suddenly a voice broke through the commotion. “My father,” a child emphatically exclaimed, “does nothing to help welcome Shabbat, nothing at all.”  The little girl, likely 5 or 6 years old kept repeating this amid the chorus of her proud classmates who kept on shouting out their father’s contributions to making Shabbat special.


Taken aback, the teacher asked the little girl if it was possible everything was already done earlier.

“Certainly,” said the little girl, “my father sweeps the floor. And he washes the dishes. And sets up the candles.” It seemed her father did many things, yet the girl insisted he did nothing.

Bewildered, the morah turned to her students and asked, “What do your mommies do on Erev Shabbat?”

Immediately, the same child’s voice rang out. “My mother sits in a chair and says the same thing over and over again to my father, ‘You do nothing to help in the house.’”

Rebbetzin Gross concludes her column by saying that domestic discord can adversely effect the neshamas and personalities of young children.

What the kindergarten teacher described goes beyond “family discord.” It’s “domestic dystopia,” and it was a possible cry for clarity from a very confused and traumatized child whose perception of reality is being shattered by a severely mentally ill mother. How will this hapless child ever trust what she perceives, when a parent, who lives in a skewed reality, tells her the opposite of what she sees?

Unfortunately I have met many individuals who I believe suffered severe emotional abuse in their childhood and can only exist by reinventing reality. This woman might have Narcissistic Personality Disorder. People with this disorder project their flaws and weaknesses on others, because their extremely fragile egos cannot handle even a sliver of criticism. Likely as a vulnerable, sensitive child, she was repeatedly told she was inept and useless and made to feel she had no value. To protect her battered sense of self, she avoids doing anything, yet accuses the other person, who by necessity steps up to the plate, (as the girl’s father had) of doing nothing.

A friend’s car was once hit from behind while she was driving on a highway. The man who caused the accident furiously told the police that my friend had driven backwards, and thus hit his car so it wasn’t his fault. The thing is the man did not deliberately lie; his excuse was too bizarre. This man believed his altered reality. I can only surmise that he had some personality disorder that did not allow him to admit any imperfection or inferiority.

Personality disordered people can be very convincing, and I believe that many spouses, especially men, stay in horribly abusive marriages because they are terrified of being cut off from their kids. Sick, twisted women can accuse their spouse of all kinds of disgusting behaviors and come across as very sincere and honest because their twisted reality is real to them.

These men sacrifice their lives so there will be some normalcy for their kids.  But intervention is crucial. This young kindergartner believes what her mother says about her father. She isn’t old enough or sophisticated enough to think, “My mother says my father does nothing, but he actually does a lot.” This child is at risk of having mental health issues herself, as she can’t trust her perceptions. I pray that this teacher got someone in authority involved in evaluating this family, because I am sure that what the little girl repeated is not an isolated incident.

We can assume that this mother relentlessly projects her self-hatred (the result of being made to feel she was garbage as she was growing up) and denigrates, minimizes, vilifies and scorns her husband, and he may be too broken psychologically to stand his ground. The children may take her side so as not to get her angry.

I once wrote about Molly, a very shy, quiet, isolated middle-aged single neighbor whose entire life was going to work and coming home, terrified to escape her mother’s control. I never saw her leave the house with a friend. My parents invited Molly and her mother to a Seder one year; Molly didn’t say a word. But her mother repeatedly cursed the son who got away, extending her hatred onto her son’s offspring, her only grandchildren.

This little girl could be a future Molly, chained to her mother, or even emulate her mother’s vile abusive behavior since that is all she knows. As Rebbetzin Gross wrote, “young children observe and absorb even the tiniest details of their parents behaviors.”

There have been letters to the Jewish Press over the years from heartbroken parents/grandparents distraught over their children becoming shells of their former selves, and cut off and isolated from the family. I believe that personality-disordered men and women are deeply terrified that their spouse/child will walk away since they are not worthy of love. That is why they isolate and brainwash their hapless victims and turn them against their families and friends.

For those who wish to leave these relationships, it is prudent to reach out to professionals who can assist. Among the organizations that come to mind are Shalom Task Force and Relief Resources. 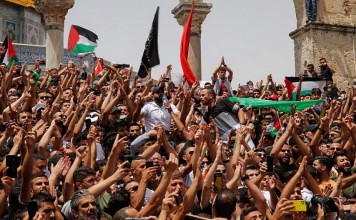