I was a bit surprised to see my sister Rini sitting in the rocking chair at the end of the kitchen, rocking peacefully back and forth. Rini, age eleven, generally prefers more intense activities, such as bike riding, ripsticking, and yelling.

“What’s up?” I asked. In response, Rini peacefully raised her finger to her lips. I looked again and realized that Baby Devoree (Niece #2) was nestled in her arms.

I was a bit more surprised when the door banged open and in walked Mollie (Niece #1), her face peeking out from a full-body furry chicken costume. My teenage sister Esti followed, looking somewhat tired.

“Why is Mollie wearing a chicken costume?” I asked.

“Because she wanted to,” Esti explained tiredly. She fell onto the couch, looking exhausted. Mollie calmly bent and picked up some toys. Her white-feathered fur contrasted nicely with the carpet. Her furry orange leggings covered her shoes perfectly.

It was ninety-eight degrees outside.

“Why did she want to wear the chicken costume?” I wondered.

“Because she saw it hanging in the basement, and she pointed and said, ‘I want to wear dat.’”

“But why were you in the basement?” I asked.

“Because I was looking for clothes for her to wear.”

“But why did you need clothes for her?”

“Because her clothes were all wet.”

“Well, she was playing in the bathroom sink, but Rini had to take a shower, but Mollie didn’t want to leave, so I got her out by promising she could play in the kitchen sink, so I put a chair at the kitchen sink, but I didn’t realize the soap was there, and she decided to wash the dishes.”

“So you agreed that she should wear the chicken costume?”

“It wasn’t really a matter of agreeing,” Esti explained tiredly. “She insisted.”

My eyes traveled up and down, from orange headfathers to orange toes. “Yes,” said Esti, “headpiece and leggings too.”

Esti paused. “She thought she looked very good in it. She was excited to go out. She said, ‘I so pretty.’  Unfortunately, the kids on the block didn’t seem to think so. When we went outside, everyone was staring at her,” she continued rather unhappily. “All the little boys on the block came and were standing around. ‘Tell her it’s not Purim’, they were saying.”

It was time for the next step in Tante Duty.

“Mollie,” Esti asked dutifully, “would you like to eat?”

“Yeh,” Mollie responded. This was fortunate, as Mollie often prefers more interesting activities, such as Play Toys or Read Books, to mundane chores such as Eat Food.

“Ok,” Esti said carefully. “So let’s take off the chicken costume and Esti will make you yummy lunch.

“No!” Mollie responded, upset and anxious.

“No!” Mollie was firm.  As Esti made moves indicative of removing said apparel, Mollie showed signs of extreme anxiety and upset. “No! I wanna wear chicken costume!”

“So then we have to take off the chicken costume.”

Thus began a conversation based on Socratic Reasoning, analyzing the possibilities (blueberries? Yogurt? Strawberries?), effects (what happens if you eat blueberries when you’re wearing a white chicken costume?), and alternatives (what if we put on a smock?) inherent in the presentation of the situation. After much give and take, it was concluded that both intellectual camps would compromise their views and agree that wearing a chicken costume and a smock was acceptable while eating strawberries.

There was just one catch.

“You see, Rayzel’s wearing a smock,” I had said staunchly, grabbing Mom’s apron and quickly donning it. This had positively affected Mollie’s attitude towards smock wearing.

“Esti wear smock,” Mollie pointed out. Esti donned a smock, and set out a plate of strawberries. Soon a bib was around Mollie’s neck.

I hastily grabbed another bib and fastened it over my apron. “See!” I cried. “Rayzel’s wearing a bib too!” Mollie commenced eating.

“Nooooo!”  Yes, rolling up chicken sleeves can definitely be traumatic.

Socratic Reasoning was attempted. It failed.

“Look!” desperation was becoming more apparent in my voice. “Rayzel is rolling up her sleeves!”

Mollie looked at Esti. Esti quickly rolled up her sleeves.

The chicken sleeves were rolled up.

The rocking chair rocked wildly as Rini stood up. “Shhhhh,” she whispered. “I’m putting her down.”

Freed from her sleeping burden, Rini dropped into a chair. “I’m soooo hungry,” she groaned, pulling some grapes towards her.

Mollie looked carefully at the new arrival. “Rini roll up sleeves,” she determined.

Rini quickly rolled up her sleeves. Mollie popped a berry into her mouth. One second: something was not quite right. “Rini put on bib,” she said, identifying the problem and solution at once.

And so it was that when Big Brother-In-Law came to pick up his darlings, he found one furry chick and three obedient chickens, all wearing smocks, bibs, and rolled up sleeves.

Did Ayelet Shaked Borrow a Page from FDR’s Play Book? 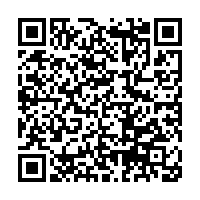