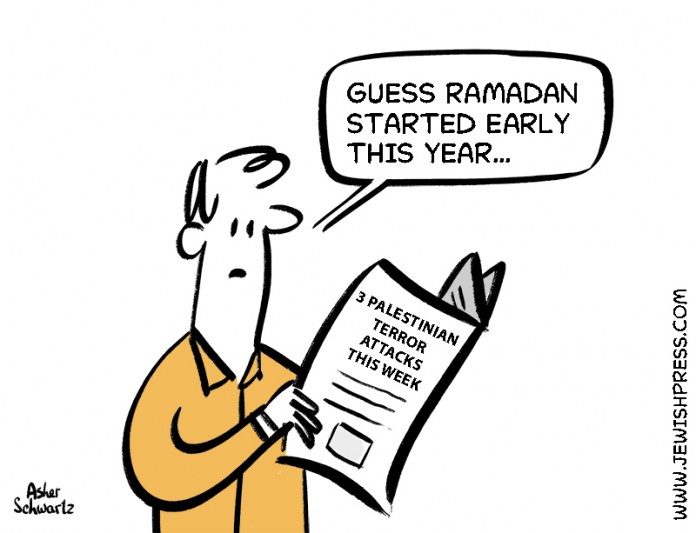 After the recent terrorist attack in Beer Sheva that took four lives, I (rhetorically) asked our leadership if they had a plan to deal with Arab terrorism, something more long-range than beefing up the police presence over Ramadan. Since then, there have been two more attacks, one in Hadera and one in Bnei Brak, bringing the total number of murder victims to eleven in one week.

The Beer Sheva terrorist was a Bedouin Arab, a citizen of Israel. The Hadera murderers were also Israeli citizens, from Umm al Fahm in the “Arab triangle” east of that city, who identified with the Islamic State. The terrorist who murdered five on Tuesday in Bnai Brak was from the Jenin area in the Palestinian Authority. He was in Israel illegally, working on a construction project. Some reports say that he was associated with Fatah, the party of PLO/PA leader Mahmoud Abbas. Diversity in terrorism.

Three of the murdered and one of the seriously injured victims were policemen. And of those, one was a Druze and another was a Christian Arab.

These terror attacks are the tip of an iceberg. Part of the rest of it showed itself last May, when during a war that was provoked by Hamas rocket attacks, we experienced a murderous uprising by Arab citizens:

In little more than a week, Arab rioters set 10 synagogues and 112 Jewish residences on fire, looted 386 Jewish homes and damaged another 673, and set 849 Jewish cars on fire. There were also 5,018 recorded instances of Jews being stoned. Three Jews were murdered and more than 600 were hurt. Over 300 police officers were injured in disturbances in over 90 locations across the country.

That wasn’t a peaceful demonstration. It wasn’t even a riot. It was a rebellion, an attempt to open a second front during a war. And it wasn’t “clashes between Arabs and Jews”:

By contrast, although some commentators have push [sic] the ‘both sides’ line, no mosques were damaged, one Arab home was firebombed (by Arabs that mistook it for a Jewish home), 13 Arab homes and cars were damaged, and 41 Arab bystanders were hurt by hurled stones. There were also two attacks by Jewish extremists against Arab bystanders, in Bat Yam and Herzliya. Bat Yam saw a large and violent demonstration by far-right Jews.

More of the iceberg, which has been growing for years while Israelis and their leaders have kept their eyes shut, has recently become visible. That is the astonishing fact that a great deal of the Negev and the Galilee have become no-go zones, controlled by Bedouin crime gangs:

Residents of the Negev (and parts of the Galilee) have felt, for years, that the government has abandoned them to the violence and crime of the Bedouin community. According to some estimates, some 100,000 acres of Israeli land have been ceded to the Bedouin—security forces will not or cannot exercise control in those areas, and the Bedouin have, some say, created a state within a state. … today the amount of weapons that the Bedouins in the Negev have right now … they have more weapons than two divisions of the IDF right now in the middle of the Negev. They smuggle weapons and drugs of more than 4 billion shekels a year between the Negev and Egypt …

Israel has very strict firearms laws. An Israeli citizen generally cannot possess a rifle, and must demonstrate a need (living in a dangerous area, a job as a security guard, etc.) to obtain a permit for a pistol. The amount of ammunition one can have is also limited. Yet the Bedouins and the criminal gangs in Israeli Arab towns are armed to the teeth with weapons stolen from the IDF, smuggled from Egypt or Lebanon, or even homemade. The murder rate among Israeli Arabs reflects this, being 12 times greater than that of Israeli Jews. Possibly the next time there is an uprising like the one last May, these guns will be turned against the Jews.

The trends are not encouraging. Our Muslim Arab citizens increasingly believe that the State of Israel is illegitimate, built on land “stolen” from them, and is a temporary edifice that will soon be liberated and replaced by an Arab state. Although it is true that only a small minority would engage in terrorism,

The perpetrators of … violence operate in a society that is to a large extent sympathetic or supportive of their goals, if not always their methods.

The above is true not only of the “Arab in the street,” but especially so of their representatives in the Knesset and their academic intellectuals.

This situation has arisen because of a basic misperception of who we are – or rather, who we must be – in order to survive as a Jewish nation in the Middle East. The same misperception also weakens us in our relations with other nations, both our “friends” in Europe and North America, and our enemies. Israel cannot continue to survive as a “villa in the jungle,” in the words of Ehud Barak. We cannot establish a Scandinavian country here. Israel is part of the Middle East. We must put limits on who can live here and who can have political power.

In the Middle East, religion and ethnicity, tribal characteristics, are of great – no, overwhelming – importance. The idea that these can be ignored and a democratic and egalitarian state maintained here, given the demographic reality of today’s Israel, is delusional.

As everyone knows, in a non-totalitarian state, most people don’t obey laws because of fear of the police. They do so because they accept the principle that laws exist for the common good, and the legitimacy of the state that enforces them. If this were not the case, there would need to be almost as many police as citizens (as was close to the truth in communist East Germany). But most members of the Muslim Arab minority in Israel do not accept these propositions. Although we need to act with greater harshness against terrorism – a good start would be a death penalty for terrorist murder – we would need to become a police state like East Germany before we could suppress what is a genuine popular movement among one-fifth of the population. And keep in mind that this popular movement also has a great deal of external support (as well as help from the masochistic, auto-antisemitic Left within the country).

We will not convince the acolytes of the Palestinian Movement to turn around and support the Jewish state. No amount of money or benefits to this segment of the population, or the participation of their representatives in the government will help (indeed, they have had the opposite effect). The only way to defeat this movement is to remove its supporters from the country. It would be good if this could be a gradual, nonviolent process effected by incentives, as suggested by Martin Sherman. But if that is impossible, then we must force them to leave.

Either we will face these facts and deal with them head-on, or we will not survive in the region.