In New York City, smacking a Jew in the face for the hell of it is OK. Oh, you will get arrested if a cop sees you doing it, but in a larger sense, it’s OK, because everyone knows that Jews are racists, and you can do anything you want to a racist.

In Amsterdam, police “stand idly by” while a local Jew is beaten by hooligans singing about Nazis burning Jews, because – now, pay attention – the hooligans are fans of a football team whose major rival is considered “Jewish,” having had several Jewish players and being liked by Jewish fans. If you don’t think this is strange, consider that nobody beat up Yankee fans because of Joe Dimaggio and Phil Rizzuto.

In Pruchnik, Poland, a ritual observed before WWII in which an effigy of Judas is beaten and burned has recently been revived. For some inexplicable reason the effigy has “a hooked nose, black hat and sidecurls typical of ultra-Orthodox Jews.”

In the UK, the candidate from a major party for Prime Minister is … you know.

In the halls of the European Court of Justice in Brussels, it’s been decided that Europeans need to know not only where something is made, but whether a Jew made it. It’s important that Europeans be “informed” so that their decisions can be based on “ethical considerations” among others. The ECJ thinks it’s illegal for a Jew to live in a place where his ancestors lived, which was set aside for Jewish settlement by the international community in 1920, where Jews lived until they were ethnically cleansed by the Jordanian army in 1948, to which they returned in 1967, and which the PLO itself agreed (in 1994) would be under full Israeli control. But we are talking about Jews, and the rules are always different for Jews.

I could go on for pages and pages if I had the stomach for it. But I’ll get to the point, which is what I think we should do about it.

It isn’t what you think. I do not advocate trying to teach Jew-hating bullies about the Holocaust, or about the importance of tolerance, or that someday they might be the ones being persecuted, or about how all humans are brothers (they aren’t). I would like the police to do their jobs, but that is only a solution in individual cases, and requires that the perpetrators be captured and actually punished – and anyway, the European Court of “Justice” and Jeremy Corbyn are unlikely to be arrested.

Humans are not all that far in an evolutionary sense from their animal ancestors. And they are still primarily motivated by deep emotional urges. Logical reasoning at best gives them an excuse or a justification for their behavior. So there is little point in education. And as I have pointed out before, teaching them about the Holocaust often encourages anti-Jewish violence because it demonstrates that the darkest desires of the Jew-haters can actually be – indeed, have been – realized.

No, what they need is to respect Jews, which is different from liking them and even farther from feeling sorry for them. I haven’t done the research, but I am willing to bet that worldwide antisemitic acts decreased sharply after the Six Days War, even taking into account the fact that the Arabs were angry about losing the war. This is because Israel, as the nation-state of the Jewish people, is also a standard-bearer for them. Strength brings respect. If Israel wins wars and international sporting competitions, if it is economically successful, then the respect earned by the state of the Jewish people also trickles down to the individual Jew in New York, Amsterdam, or anywhere else.

Of course humans are complicated. Success has a downside of stimulating envy and hatred. Antisemitism has a big component of envy. But I’ll trade that for respect.

Everything we do in Israel either adds to the sum total of respect we get or subtracts from it. Terrorism against us, when it is successful, subtracts, although if the terrorists are killed on the spot, that’s a plus. We do a pretty good job of arresting terrorists, a plus, but unfortunately the leniency they often receive makes us look weak, a minus. Our ability to develop technological marvels like Iron Dome is a plus, but the fact that we are content to bat away missiles without killing the would-be murderers that are launching them is a very big minus.

Of course, the thug that punches a Jew in New York is not thinking about the Six Days War or Iron Dome, or indeed about Israel. He is just enraged by the Jewishness of his victim. But I think there is such a thing as a collective consciousness, and everything that happens to a Jew or the Jewish state that enters this consciousness changes it, perhaps only a tiny bit, but changes it nevertheless.

So it is very important for us to not only win wars, kill terrorists, and in general crush our enemies as viciously as possible, but our messaging must project strength, competence, and even aggressiveness. We must avoid the image of victimhood. Experts in self-defense teach that a tactic for avoiding attacks in the street is to not look like a victim. Victims are held in contempt and invite attack. This goes for states as well as individuals, for hasbara as well as posture.

What about the establishment bullies in Brussels and the UK? I think we sometimes do the opposite of what’s necessary to fight them.

For example, the IDF goes to great lengths to avoid civilian casualties, and to try to hew close to the letter of the laws of war. It has been more successful in this endeavor than any other army, including the US and NATO forces. But the complex of “human rights” NGOs and the UN still come down harder on Israel than any other nation. And since our enemies use tactics of asymmetric warfare against us, the more careful we are, the harder it is to defeat them.

This may be the wrong tactic. After all, the US and Britain engaged in strategic bombing of cities during WWII, in order to “destroy the enemy’s will to fight.” Today, such bombing would be considered a war crime. I am not suggesting that we deliberately harm civilians, but rather that we apply the same standards that today’s US, UK and NATO would. We would still be excoriated by the “international community” but in addition to the military advantages, there would be a psychological one – both against the enemy and in the rest of the world.

This isn’t easy. Millennia of diaspora existence taught the Jews to take a low profile, to not be aggressive, to not tug on anyone’s cape. They were dispersed and weak and in most cases didn’t have a choice to behave differently. Antisemitism grew and thrived, in part because it was easy and safe to victimize them. As a sovereign nation we don’t have to take it anymore. If we make that clear to the world by our actions, it might ultimately change the image of the individual Jew as well – from a victim to an object of respect. 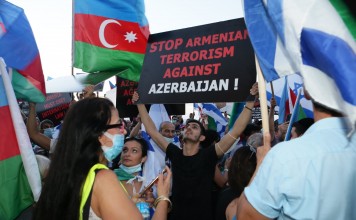