It is [like this] with mothers. Whey they have borne their children and given them their milk and beauty and strength, they themselves become insignificant and no one asks about them anymore…. Perhaps it is sad and yet also beautiful.

Herman Hesse, The Journey to the East


In one of the most mysterious verses in the Torah (Bereshit 35:8), we read about the death of Devorah the nursemaid, a character so minor that we have never really heard of her before. (She is presumably mentioned once, though anonymously, as being sent with Rivkah on the latter’s journey to marry Yitzchak.) Any mention of such a character would seem strange, but all the more so her death, an event that is generally only recorded with major characters. For example, we do not read about the death of Rivkah or Leah.

This leads to some very speculative guesses to the significance of this verse: She had been sent to help Ya’akov with his children and became a close part of the household; she had joined Rivkah on a journey to meet Ya’akov in Beit El but died when they got there; she was coming to tell Ya’akov that Rivkah had died.

On the other side of the spectrum, commentators that try to stick to the plain meaning succeed at being less speculative, but only at the price of giving even less convincing explanations. By this group, we are told that this specific mourning was what ended God’s communication with Ya’akov here; or that the Torah is simply explaining the reason for why this geographic location’s name is what it is.

While one of the previous explanations – that Deovrah died only after she brought news of Rivkah’s death – seems far beyond what we read in the verse, it cannot be denied that Devorah’s association with Rivkah seems to be the only hint here as to why the Torah mentions her. But it is not likely that it is about Rivkah’s death, about which the Torah remains completely silent. Then again, it is not only about her death that the Torah is silent. Once she sends Ya’akov away, we basically never hear about her again.

It is as if she just fades away, only to be mourned through her nursemaid – the one who was most likely responsible for feeding Ya’akov and Esav in their infancy. Perhaps the Torah is giving us a small hint here to help us understand this matriarch – who like her husband – stands out as more different from her predecessor and successor than they were from each other.

There are other hints however. The Torah refers to Sarah as Avraham’s wife, “ashet Avraham (or Avram)” twice, it refers to Rachel as “ashet Ya’akov” once, but it never calls Rivkah “ashet Yitzchak.’ (It does not use this term with Leah, as she was not his primary wife.) Instead the Torah uses another term for Rivkah – the mother of Ya’akov and Esav, “em Ya’akov ve’Esav.” This expression is not used anywhere else in the Torah, though it is used a few other times in the rest of Tanakh, most notably with the mother of Sisera, and Batsheva, the mother of Shlomo. Indeed, the term is so unusual that Rashi registers surprise about it – he confides to not knowing what the Torah is trying to teach with it. As if this were not enough, when Ya’akov first meets Rachel, he is repeatedly identified as the son of Rivkah (Bereshit 28:22).

It seems that all of these clues point back to a move Rivkah makes early in the narrative – a move which identifies her as the Torah’s mother par excellence: When Ya’akov expresses his fears about being cursed by his father for trying to deceive him, Rivkah boldly asserts that the curse will fall upon her. On some level, this seems to be an exaggeration meant to encourage her son. But in view of how Rivkah lived the last years of her life, it can be a very real acceptance of what it meant to do what she thought was best for her favorite son (and probably for Esav as well).

As the mother who puts her children’s welfare in front of her own, Rivkah takes the consequences of the deception upon herself, knowing that she would likely be the one to suffer the most. For it seems that she never saw Ya’akov again – neither he nor his wives and children. In fact, it is even possible that she was not even aware of his ultimately fortuitous fate. Instead, she had to live out the rest of her life with her other difficult and angry son, alongside an increasingly otherworldly husband.

It is true that Rivkah’s plot had difficult consequences for everyone involved; but when we are briefly reminded of her here, the Torah may well be cluing us in on her unique self-sacrifice for her children – meaning all of us. 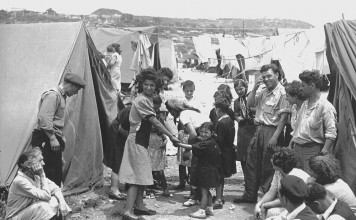 When will the ‘Happy Dhimmi’ Myth be Discredited?