[Originally published at Elder of Ziyon]

J-Street’s conference held a panel on “Fighting Anti-Semitism and its Weaponization in American Politics.”


Already by equating antisemitism with its supposed “weaponization” (which exists but is not nearly as big an issue,) the panel was doomed from the start from seriously looking at the problem.

The entire discussion was naturally about antisemitism on the Right. It is a real problem, but not the way it was framed here.

Haile Soifer
Haile Soifer wasted no time in attacking Donald Trump, the only president who has a Jewish daughter and grandchildren.

She claimed falsely that he excused the white supremacists in Charlottesville, and she claimed that he failed to condemn antisemitism ever (although she accidentally said “condone.”) She also claimed that the white nationalists who have attacked blacks and Jews in the US all were aligned with Trump, when they almost all hated him because he was too philosemitic.

I do not disagree that Trump has said things that embolden racists in the US. There is plenty to criticize him for in dividing the nation. (It is not so clear that the number of racist incidents increased under Trump, when the 2018 FBI hate crimes statistics are released we’ll have a better idea.

2017 showed a marked increase but also many more agencies were added to the reporting compared to 2016, so the data sets may not be comparable.) But when you criticize him, do it accurately.

Peter Beinart
Peter Beinart said “I agree with everything [Haile] said.” So, truth is certainly not something that this J-Street panel prizes.

Beinart also said, to applause, that anti-Zionism is not antisemitism, but his reasoning was quite bizarre:

Would Beinart say that Jews who say that there is no room for Palestinians to have any political power in the region are not bigots?

But Palestinians who say that Jews have no right to live in the region as anything but second class citizens – which is the standard and mainstream Palestinian position – cannot be called antisemitic because that would “silence” them!

Sorry, Peter, antisemitism’s definition is not dependent on whose feelings it might hurt. Arab and Muslim antisemitism is a thing, as much as you don’t want to admit it. Saying that the Jews are not a people – the official PLO position! – is antisemitic.

Saying that they [Jews] do not have the right for self-determination in their historic homeland is antisemitic. And having a different standard for what Jews can say about Palestinians and what Palestinians can say about Jews in the area is itself an example of bigotry.

“The reality is that the definition of antisemitism that was developed for use overseas that has been adopted by some here in the United States …that they are attempting to use that definition on our college campuses, that is not an acceptable definition of antisemitism. As a result, we’re entering in this sort of grey space…[During a time of worries about white supremacist violence] we’re trying to decide how much I can criticize the State of Israel before I get labeled a certain thing. I think that’s crazy. “

So now we are told by a Muslim that Jews cannot define what antisemitism is because she demands the right to compare Israel to Nazis or say Israeli Jews love to kill children and poison the wells.

IHRA has no problem with criticism of Israel, and Berry knows that – but she wants the right to demonize any Jew who supports Israel or to demonize the Jewish state for actions that would be considered nothing in every single Arab state.

(I have yet to see a critic of the IHRA definition say which specific examples given there of anti-Zionist antisemitism they do not agree with. Because they know that double standards for Israel is in fact antisemitism.)

“I think one of the biggest mistakes J-Street makes is the position its taken on BDS. [Applause!] Because if you equate the entire movement with antisemitism then the logical conclusion is Rashida [Tlaib] is an antisemite. And that is a problem we should all be very concerned about.”

This is after she noted that Jews never considered the previous Muslim members of Congress to be antisemitic, and it is only because Tlaib and Ilhan Omar support BDS that they are considered as such.

This is a mirror of Beinart’s argument, that if a definition of antisemitism ends up calling someone you like an antisemite, it must be wrong. That is not how definitions work.

(Also, J-Street does not say that BDS is antisemitic.)

Victor Kovner
Perhaps the most offensive part of the session was a question from a J-Street board member, Victor Kovner, that was itself antisemitic:

In other words, are religious Jews the disgusting racists I think they are?

Of course no one called Kovner out for his fairly clear bigotry.

Beinart tackled the question but watered it down for public consumption, saying that some Zionists naturally will ally with like-minded political groups, as if Jews are willing to accept right-wing Tree of Life-level Jew-hatred for Israel. But the question revealed much more about how the (mostly elderly) leftist J-Street attendees really think.

In short, it was an antisemitic question that was tolerated at a panel supposedly about antisemitism.

Kovner, a major J-Street fundraiser, described J-Street’s goal in a 2008 New York Times article this way: “Candidates would also be able to use the group’s endorsements as a shield against accusations that they were anti-Israel.”

Does this sound like someone who loves either Israel or Jews?

This panel was a disgrace for a supposedly Jewish, pro-Israel organization that pretends to care about antisemitism. 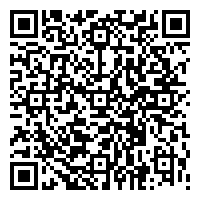