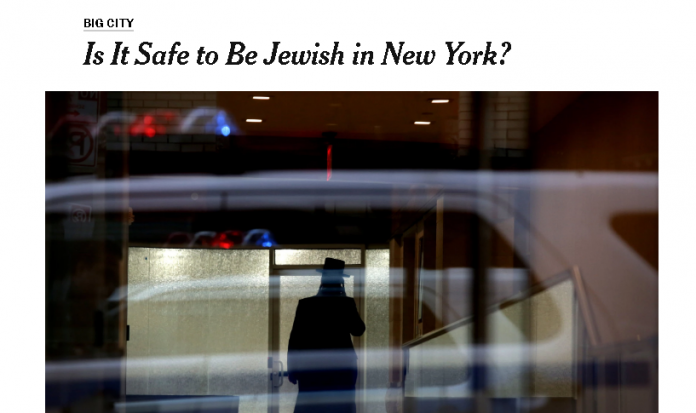 The New York Times has a good article about antisemitic hate crimes in New York City.

Contrary to what are surely the prevailing assumptions, anti-Semitic incidents have constituted half of all hate crimes in New York this year, according to the Police Department. To put that figure in context, there have been four times as many crimes motivated by bias against Jews — 142 in all — as there have against blacks. Hate crimes against Jews have outnumbered hate crimes targeted at transgender people by a factor of 20.

This is a startling statistic. FBI hate crime statistics shows that anti-Jewish hate crimes easily outnumber all other anti-religion hate crimes nationwide, and they have since they started keeping records, but usually anti-black crimes are far more prevalent nationwide. New York is the only city where Jews are the top victims of all hate crimes.

The actual numbers are even more stunning. In 2017, there were 151 complaints about antisemitic hate crimes, as opposed to 34 anti-black crimes and 40 anti-gay crimes.

Then the article reveals something that is almost incomprehensible to anyone who relies on the headlines to determine what the biggest threat to Jews in America are:

During the past 22 months, not one person caught or identified as the aggressor in an anti-Semitic hate crime has been associated with a far right-wing group, Mark Molinari, commanding officer of the police department’s Hate Crimes Task Force, told me.

22 months is how long Donald Trump has been in office.

We should not minimize right-wing antisemitism. But too much of the news coverage in the wake of Pittsburgh has minimized all other forms of antisemitism. Muslims attacking Jews and blacks attacking hasidim are “accepted” as just part of the scenery, barely worth reporting. The article dryly mentions:

When a Hasidic man or woman is attacked by anyone in New York City, mainstream progressive advocacy groups do not typically send out emails calling for concern and fellowship and candlelight vigils in Union Square, as they often do when individuals are harmed in New York because of their race or ethnicity or how they identify in terms of gender or sexual orientation.

Sympathies are distributed unevenly. Few are extended toward religious fundamentalists, of any kind, who reach the radar of the urbane, “Pod Save America” class only when stories appear confirming existing impressions of backwardness — the hordes of children delivered into the world whom families refuse to vaccinate and keep semiliterate.

The Anti-Defamation League maintains its own statistics and last year it reported that nine of the 12 physical assaults against Jews categorized as hate crimes in New York State were committed in Brooklyn and involved victims who were easily marked as members of traditionally Orthodox communities. Outside that world they were hardly noticed at all.

Jewish lives matter – but seemingly only when they are attacked by evil skinhead neo-Nazi villains. When the Jew is attacked by a person of color or a Muslim or a “pro-Palestinian activist,” then the sympathy by the “progressive” crowd disappears, seemingly because the attacker has established themselves as the bigger victim in the grand scheme of things. The motivation of a black antisemite against “rich Jewish landlords” or of a Muslim against “Zionist usurpers” makes those crimes somehow less interesting to report and the victims less sympathetic. The 1991 Crown Heights pogrom, where mobs of people of color attacked Jews and yet the media reported it as if both sides were fighting, still rankles.

To put it simply, incidents of people attacking Jews aren’t as juicy when the attackers aren’t neo-Nazis.

The real, everyday antisemitism that far outstrips all other hate crimes doesn’t interest New York City liberals. There is no outrage among them when videos surface every couple of months of religious Jews being mercilessly attacked in their own neighborhoods.

If these so-called “progressives” would be honest with themselves, they don’t want to sympathize with those Jewish victims because deep down they think, to some extent, that those Jews deserve it – that those Jews are the oppressors, not the oppressed, in the Oppression Olympics. If the attacker is black or Muslim, suddenly there is visceral sympathy for the attacker, no matter what the facts.

Deadly attacks and major terror threats against the American Jewish community over the past three decades have been pretty much divided between far-right and Muslim attackers. The progressive crowd is usually not directly involved in gunfire or bombings. But that doesn’t mean that the Left is any less antisemitic than anyone else. Their selective outrage over Jews being attacked based on who the attacker is shows that their supposedly principled stand against antisemitism is really an excuse to show their outrage over their ideological enemies – the Jewish victims are reduced to being props for the real agenda of hating Trump.

The bias is the same as the bias of those who attack Jews to begin with.

If one is going to justifiably blame Donald Trump for creating an environment where extremist rightists feel more comfortable attacking Jews, then one must also blame the liberal media and the “progressive” crowd for consistently downplaying the far more numerous antisemitic attacks when the attackers are black or Muslim or “anti-Zionist.” They are just as guilty for creating an environment where Jews can be attacked with impunity.

Pittsburgh should have brought people together to understand the reality of antisemitism in America today.  There are strains of antisemitism in every group – right and left, black and white, Muslim and Christian. Instead, the slaughtered Jews of Pittsburgh have been turned into another prop in a pissing contest between groups who are all guilty to some extent of enabling Jew-hatred.