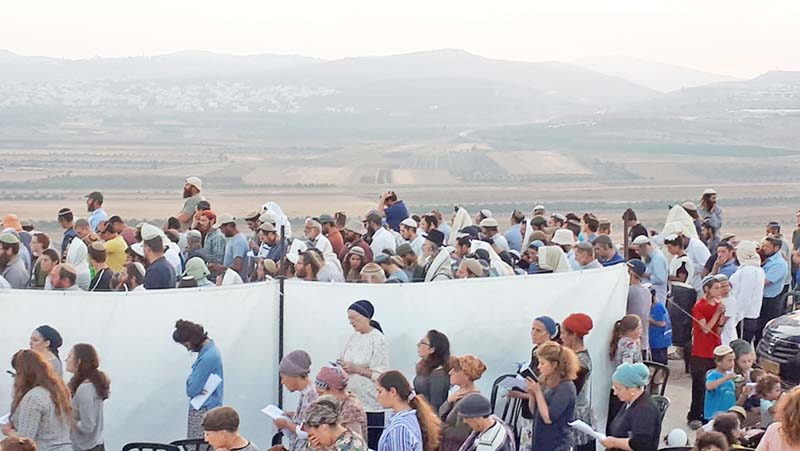 On Shiva Asar b’Tammuz, three generations of settlers attended a prayer demonstration to draw attention to the construction of a new Arab city adjacent to the Shilo bloc of yishuvim which, if not stopped, will bring an influx of Arabs across the street from their homes.

Most immediately affected will be the small hilltop settlements of Amichai and Adai Ad. An access road the Arabs are building cuts through the edges of their property.

Era Rapaport, age 74, a founder and former mayor of Shilo, told The Jewish Press that his home is “a Mickey Mantle homerun away from the site of the Arab infrastructure work.” One of his daughters, who lives in Adai Ad, organized the prayer demonstration and is active in the inchoate struggle to pressure Israel’s government to foil the Arabs’ building plans.

Rapaport is a graduate of Yeshiva University and studied in Mercaz HaRav Yeshiva in Jerusalem. In 1976, with the blessing of Rav Tzvi Yehuda Kook, he and his wife helped establish the settlement of Ofra, setting up their home in the barracks of an abandoned Jordanian army installation. Two years later, they joined a group of pioneers determined to establish a Jewish settlement on the barren slopes of Shilo, once the home of the Mishkan.

The Jewish Press: How did you become aware that the Arabs are planning to build a city nearby?

Rapaport: From the windows of their homes, my daughter and the residents of Adai Ad and Amichai could see Arab bulldozers at work on the access road, 50 meters away. We investigated and found that building plots had been marked off on the site.

When we approached COGAT – the government agency responsible for overseeing civilian policy and security in Yesha – they told us not to worry; it was only work intended for agricultural purposes.

When we showed them a detailed map of the proposed Arab town – which we had secured from an unnamed “friend” – clearly delineating hi-rise apartment buildings, parks, and an industrial zone, the COGAT people realized they couldn’t play games. They promised to look into the matter, but we have learned too many times that their promises are worth bupkes.

In the disastrous Olso Agreement, Judea and Samaria was the divided into areas A, B, and C. The area in question is part of Area B where the Arabs have complete control over civilian affairs while the IDF maintains overall control of security matters. That means the Arabs are free to build wherever they please, so long as it doesn’t threaten the security of the Israelis.

The young people who live in Amichai and Adai Ad are trying to make our government realize the clear danger involved in allowing the Arabs to build what will surely become a terrorist haven in their backyards. If the army tells the government that the project jeopardizes security in the area, the powers-that-be can stop it.

I imagine you have alerted people in the government. What’s their reaction?

The old familiar story. “Terrible, terrible. This must be stopped. We will look into the matter immediately.” In other words, more bupkes. You have to wonder if our supposed right-wing government is really right-wing.

Prime Minister Netanyahu claims he is a great friend of the settlements.

He is and he isn’t. For instance, the road that services the settlements from Yerushalayim to Elon Moreh and Har Bracha – Highway 60 – is the same lousy, narrow, pit-filled road that existed 40 years ago when I we first moved to Shilo. In all that time, in the face of hundreds of petitions, maybe a few potholes have been filled.

Dozens of motorists – Jews and Arabs alike – have been killed in road accidents which could have been prevented by paving a wider and safer road. And then there is the almost total lack of streetlamps and the Arab hobby of running Jewish vehicles off the road.

The Jewish Press also spoke to Yisrael Medad, a graduate of Yeshiva University, and former Director of Education at the Menachem Begin Heritage Center. He moved to Shilo in 1981 and told The Jewish Press that he has either hitched a ride or ridden an Egged bus to Jerusalem and back twice a day, five days a week, some 50 weeks a year, for almost 40 years, during which time the bus or car he has been in has been stoned or shot at 50 times.

The Jewish Press: Why do you think the road hasn’t been improved?

Medad: Some people maintain that the cost factor outweighs the political gain, considering the area is not a major population center and the Likud can win more votes via other budget expenditures.

Others maintain that Arabs have planted olive groves and vineyards up to the edge of the road which enjoy legal protection from being uprooted. Still others maintain that the highway has been left a danger to discouraged increased settlement.

Many believe that the government has failed Yesha in other ways as well. Do you agree? If yes, can you give examples?

We have a catastrophic problem with the flow of water to the area. Very often, it runs down to a trickle and we have to bring in truckloads of water on our own. We also [often are not given permission to build] new homes. Here and there, new housing projects have been completed, but they are mostly projects that were submitted to the authorities over a decade ago, and which don’t even begin to meet the ever-growing demand for houses in Yesha, especially by young married couples.

Even though Obama is no longer around to say no, Bibi keeps his hand on the brakes. The problem we are facing with Arab building plans near Shilo may seem to be small potatoes in the overall picture, but it is an integral part of the Palestinian Authority’s designs to take control of the area. That’s why we, and primarily our children, are raising our voices to scream, ‘Enough is enough.’”

Era Rapaport says, with obvious pride, that the challenges of growing up on a settlement hasn’t broken the spirit of second-generation settlers. “I would say that after they get married, a majority of our kids choose to live in yishuvim themselves. Many of them sport longer peyos than we have, and the colorful head coverings of the young ladies reach up to the sky.

“In their caravans and modest houses you’ll find pictures of the Rebbe and Rosh Hashanah in Uman beside the traditional photo of Rav Kook and a drawing of the Beit HaMikdash. Thank the good L-rd, the same idealism and love for Eretz Yisrael that we cherished are the cornerstones of their homes as well.”

Era’s 30-year-old son, Yisrael, lives in the nearby and newly established hilltop settlement of Hava. He told The Jewish Press that he’s working to expand the agricultural and husbandry projects in the area and to enlist a volunteer force of watchmen to prevent acts of arson, vandalism, and plundering by the Arabs.

“The fight to halt Arab building adjacent to the settlements surrounding Shilo is not only for security reasons,” he explained. “The Arabs are working on what they call the “Fiad Plan” – which we recently discovered. The plan is to strangle the Jewish settlements in the area through extensive building and land development, heavily funded by an assortment of anti-Israel, leftist European organizations.

“Their goal is to drive the Jews out of the region by making it impossible for us to live here. The IDF and the government are only now waking up to this nefarious scheme which we have to stop now.”

Joining the prayer demonstration on Sunday was the chief rabbi of Tzfat, Rabbi Shmuel Eliahu, who is a staunch advocate of canceling the Oslo Agreement and placing all of Judea and Samaria under Israeli sovereignty.

“The Arabs want to build themselves a city here,” he told the crowd. “If you inspect the Arab villages and towns throughout the area, you discover that many of them are empty. This is because the Arabs don’t feel at home here and Eretz Yisrael expels them from its borders. Why do they need to build a new city here? To give it to the Jews in the end? Chaval, why bother? It would be simpler if the government would let us build here and live here. Eretz Yisrael is waiting to embrace her children.” 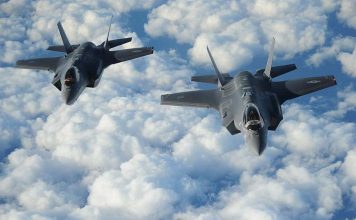 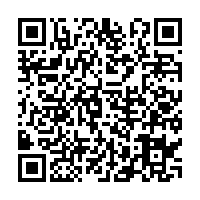