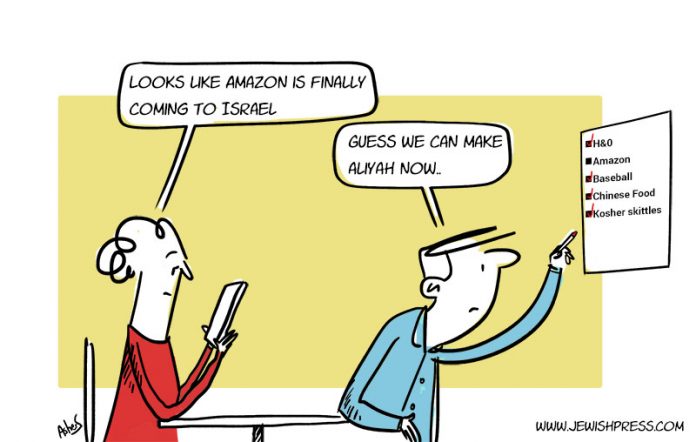 Every time a group of new olim arrives at Ben Gurion Airport on a Nefesh B’Nefesh flight, I find myself filled with mixed emotions.

On the one hand, I am inspired and overjoyed to watch happy new immigrants (who are mostly religious these days) take their first steps as proud citizens of the Promised Land. Their courage, their pioneer spirit, their love for the Land of Israel, for Torah, and for G-d are worthy of everyone’s admiration.

On the other hand, I find myself saddened that Nefesh B’Nefesh landings are few and far between. According to Nefesh B’Nefesh, the total annual aliyah count from North America is holding at 3,000-plus. Three thousand out of an estimated 6,000,000! In other words, an annual aliyah rate of .05 percent!

The Jewish people have been praying to come home to Israel for nearly 2,000 years. At the conclusion of every Yom Kippur and Pesach Seder, we say, “Next year in Jerusalem!” G-d, in His infinite kindness, has given us a Jewish airline and free airline tickets for olim to facilitate His children’s return to the miraculously-rebuilt Jewish Homeland. Yet, only .05 percent of North American Jewry come on aliyah each year!

Imagine if we were talking about a hospital with a patient survival rate of .05 percent. Or a baseball team with a winning record of .05 percent. Obviously, it wouldn’t be long before the hospital was shut down or the franchise scrapped. Why, then, is the aliyah division of the Jewish Agency still open?

I believe the same 3,000-plus Jews would move to Israel every year even if the Jewish Agency’s aliyah division didn’t exist. Perhaps even more immigrants would come since they wouldn’t be turned off by Jewish Agency shlichim telling them that they’re too old, too handicapped, or too unemployable – as many prospective olim have reported being told.

Three decades ago, before making aliyah, I worked in the public relations department of the Israel Aliyah Center in the old Jewish Agency building on Park Avenue in New York. Many of the appointees from Israel were “jobniks” – more interested being in the Big Apple than sending olim to the Promised Land.

One day, a religious, hippie-looking couple glided into the office on rollerblades – with four or five mini-skaters behind them – pushing two baby carriages. After their interview, the aliyah shliach rejected their application on the grounds that the guitar-playing mother and father wouldn’t be able to support such a large brood in Israel.

A few weeks later, the admittedly strange-looking family skated out of the elevator once again. This time, Rabbi Eliezer Waldman of Kiryat Arba happened to be in the office. “Who are they?” he asked me. After hearing my brief report, he said, “Tell the director of the aliyah department that I will take full responsibility for them. Send them to Kiryat Arba.” Indeed, the family made aliyah and settled a short skate away from Me’arat Hamachpelah.

I saw them on a few occasions in subsequent years. I can’t say the parents were great breadwinners, but the kids learned in religious schools, the boys went into the army, the girls did Sherut Leumi, and, in time, the kids married and had carriages filled with children of their own thanks to the fact that the Master of the World sent Rabbi Waldman to the Aliyah Center in Manhattan the second time the roller-skating family showed up.

The annual budget of the Jewish Agency is over $300 million. Israel’s Ministry of Aliyah and Absorption spends another $360 million. Keren Hayesod, which also takes credit for bringing olim to Israel, also enjoys a whopping budget. (In comparison, the dynamic Nefesh B’Nefesh, which I will write about in a future article, has a meager budget of $20 million.)

Instead of paying Jewish Agency salaries and office rentals around the world, Israel would be better off giving each new immigrant an outright cash gift. That would attract more olim by far than it’s getting today with all of the dinosaur bureaucracy, overlapping services, and giant payrolls.

To be fair, the dismal rate of North American aliyah is hardly the fault of the Jewish Agency alone. Many of its shlichim and staff are doing the best they can in the constricted framework of the organization’s policy not to reach out aggressively to potential olim who may never have considered aliyah, but rather to only assist people who contact the Agency on their own.

Furthermore, any hope of increasing aliyah is destined to failure so long as rabbis, roshei yeshivot, parents, and heads of major Jewish organizations in the Diaspora don’t urge their congregations, students, children, and members to make aliyah.

So long that Diaspora Rabbis, parents, and Jewish leaders don’t teach Jewish youth that their future lies in Israel – and that the solution to the skyrocketing assimilation and intermarriage statistics is aliyah – the aliyah rate is destined to remain .05 percent.

Even if the shlichim of the Jewish Agency scream about aliyah at the top of their lungs, aliyah will not increase as long as Ricky’s and Suzy’s parents don’t want their children to be so far away from the family in Florida and Toronto. As long as Diaspora Jewry focuses on strengthening its communities in New York, Los Angeles, Paris, and Melbourne, futilely trying to prolong the exile – however comfortable it may temporarily be – Nefesh B’Nefesh flights to Israel will remain few and far between.