On March 1, 2020, the Israeli public went to the voting polls – again. It was the third time in just a year in which the Jewish State sought to establish a government. While the final results are not in, it looks like Israeli Prime Minister’s Likud Party won 36 seats while the Blue and White Party won 32 seats. Overall, the Right-Religious block appears to have secured 59 seats, short of a 61 seat majority.

Meanwhile, the Palestinian Authority continues to do nothing. The PA last held elections for Parliament in 2006, in which the Hamas, a U.S., a designated terrorist organization, won 58 percent of the seats, an over-whelming majority. In 2005, the Palestinians voted for president and elected Mahmoud Abbas of Fatah to a four-year term. That term expired in January 2009, over eleven years ago, but Abbas refuses to relinquish power or hold elections.

The Palestinians have divided their areas of control with Hamas ruling in Gaza and Fatah administering Palestinian territories in the West Bank. The two parties cannot reconcile between themselves to form a unity government and refuse to let the people hold new elections as a way out of the impasse, as each party fears losing the little control it does wield.

And in the United States, the presidential contest is set like clockwork, moving towards a November vote, as it does every four years. This year, the Democratic establishment is so fearful of the leading position of Socialist Bernie Sanders, that it effectively pushed two moderates – Amy Klobuchar and Pete Buttigieg – off of the Super Tuesday ballots and to endorse Vice President Joe Biden for president, in the hopes of giving the moderates of the party a chance to coalesce behind a single person to defeat the extremist Bernie Sanders. The leaders of the Democratic Party know that a brokered convention will tear their party apart – either in blocking Bernie Sanders and making the progressive wing of the party go to war, or by giving the ticket to Bernie and watching all of the Democratic candidates around the country go down to defeat.

Such is the state of elections today: Israel forever holding elections, Palestinians never having elections and the United States attempting to control the election outcome. It brings to mind a quote by Winston Churchill, “Democracy is the worst form of government, except for all the others.” 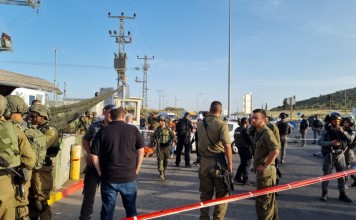