{Originally posted to the We Are For Israel website}


Hi there. I understand that you distributed granola to Birthright participants at JFK airport last week and then presented them with material criticizing Israel’s military occupation of the West Bank.

The purpose of Birthright is to encourage young people to find new meaning in their Jewish identity and strengthen their connection with Jewish history and our shared culture. While they were at the airport excited about their forthcoming trip to Israel, you took advantage of the opportunity to dampen their enthusiasm and advance a political agenda.

Now it’s not that we are really that far apart. I know you also care about Israel. I too am unhappy that we have had to build walls and erect fences and security barriers to protect ourselves from Palestinians intent on murdering us. There are unfortunately too many examples to explain why we have needed to do that to defend ourselves from an implacable enemy. (The mother and twin sister of a good friend of mine were blown up by a Palestinian terrorist while out shopping at the Dizengoff Center.)

Of course, you can support the Palestinian argument that the West Bank is occupied territory and that Gaza is a prison, but remember that Hamas and Hezbollah, who propagate that message, are funded, trained and armed by Iran and are committed to the destruction of Israel. So whose side are you on?

I have a great idea. Why don’t you leave your homes and make Aliyah as many of us have done? Put your lives on the line. That way you can take part in the political process in Israel and strengthen the Left rather than dispensing the propaganda of our enemies from afar.

Maybe you are too young to remember what happened back in 1967. East Jerusalem and the West Bank were under Jordanian jurisdiction and the Gaza Strip was under Egyptian control. Prior to WW1 they were both part of the Turkish Empire. There never was a Palestinian state and no one talked about occupation in those days.

As you may know, Israel did not enter the 6 Day War of its own choosing. Egypt had blockaded the Straits of Tiran thereby denying the passage of shipping to and from the port of Eilat, and five Arab nations combined forces to destroy the Jewish State. The then prime minister, Levi Eshkol, pleaded with King Hussein of Jordan to stay out of the war, but he wouldn’t listen.

Attempts by Israel immediately following the war to reach a peace agreement with our Arab neighbors were rebuffed. Maybe you haven’t heard of the Khartoum Resolution. Google that and understand what really happened.

I know history can be boring. You may say: “Don’t confuse me with facts. My mind is made up”, but that’s how we ended up controlling territory that many Israelis didn’t and still don’t want. We evicted thousands of our fellow Jews by force from their homes in the Gaza Strip back in 2005 in the hope of making some progress towards peace, but Hamas took control of the territory and fired rockets at people living in Sederot. We have tried repeatedly to reach a peace agreement with the Palestinian Authority and its leaders, but they have never been prepared to pay the ultimate price of recognizing Israel.

Have you ever thought of the fact that there are nearly two million Arabs who live in Israel as full citizens, but Abbas, the President of the Palestinian Authority, insists that there not be a single Jew in a future Palestinian state?

Now you can, of course, choose to back their narrative of events. They even go so far as to suggest that there was never a Jewish Temple in Jerusalem! The truth is that they don’t want us in Israel and argue that we have no historical justification for being here. Do you support that view?

Maybe, instead of criticizing your fellow Jews in Israel, you could encourage your Palestinian friends to urge their leaders to return to the peace table. At the same time, you may want to ask them whether they believe that an independent Jewish state has the right to exist in the Middle East.

Israel is by no means perfect, but neither are the Palestinians. You know that. They can’t even make peace amongst themselves. It is a tragedy that we should end up controlling the lives of millions of people who are not Israeli citizens. But be careful not to swallow their propaganda line as though they were the innocent victims of Israeli aggression. It really isn’t that simple. And if we were to withdraw our forces from the West Bank, would you be here to defend us should things go wrong? 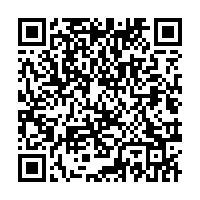