Yesterday we learned that the terrorist who smashed Ronen Lubarsky’s head with a slab of marble was arrested. It was Ronen’s friends, from his unit, who made the arrest.


The terrorist is named Islam and he comes from a family of Hamas terrorists serving prison sentences for murdering Jews. He served a prison sentence between 2004-2009 for previous participation in Hamas acts of terror.

Ronen’s family said that they were thankful to be notified that the arrest had been made, that they had had full faith in the IDF and Israeli Secret Service that they would succeed in finding the terrorist and felt a measure of relief.

This was one item on the news, among others. A quiet declaration: “A circle has been closed.”

There was no bombastic language, no discussion of what the prison sentence could be or any theoretical talk about how we’d all have been better off and (it would be more likely for justice to be served) if the terrorist had been killed during the arrest. We don’t do things that way.

Like a warm hand on your shoulder, not attempting to give comfort because no real comfort can be given (how can you ever reconcile with the fact that your son has been murdered?), a simple gesture of solidarity.

It reminded me of the front page of this newspaper which I photographed because I was struck by the power of an image to encapsulate the spirit of Israel. This is who we are. This is why we do what we do.

The caption under the photo of the two women says:
“Partners to the same destiny. Yael Shevach comforting Miriam Ben Gal: “We were chosen for this role.”

“Into the night: large mission underway to find the terrorist that murdered Rabbi Ben Gal”
Beneath that it says: “Manhunt in Shechem * a large number of forces are in the area * hundreds said their final goodbye to Rabbi Ben Gal: “We will continue to raise the children, for you” * A different bill is already closed: the head of the terrorist unit that murdered Rabbi Shevach has been eliminated.

A few short words and one hug tell the story of Israel. This is why we do what we do.

The IDF didn’t go on a manhunt because they were ordered to. They certainly didn’t do it because it’s fun. They did it for Miriam. Just like they had previously done for Yael. Just like they did now, for Ronen’s family.

This is what it means to be a family. 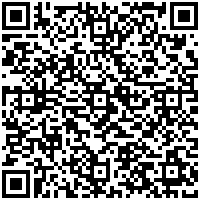