I’ve been living in Israel, in Gush Etzion, in Efrat, since the end of August. I’m here because one daughter (YD) is studying in a seminary nearby (much more on that, later), and the other (OD) made Aliyah and is going into the IDF in December.

This is our chance to try a pilot project: can this particular family of upper middle class Jewish American Zionists make it in Israel? Do we have more to contribute being here, or is it important for stalwart Israel supporters to remain in the U.S., constantly correcting the myths created by the mainstream media about Israel, the shtachim, the plight of the Arabs, and all the rest.


And does Israel really need more lawyers? Or English-writing journalists? We’ll see. But for now, here I am.

My mother came to visit for two weeks. She arrived at Ben Gurion a few days ago. Younger Daughter (YD) and I picked her up. Yes, here I am, driving in Israel. At this point, two months in, I know how to get to the airport without looking at directions. That’s exciting.

This morning I showed my mother around the neighborhood. She thinks it is GORGEOUS. As she raved on and on (“you know, everything is flat in Florida, we have none of these gorgeous hills”), I said to her:

MOM: It’s so gorgeous…what? What are you talking about?

ME: Here. This house, this neighborhood, this whole area is what the New York Times and the rest of the planet calls the “West Bank.”

MOM: … (looks around with her eyes squinched up)…no. You mean, this is what they say should be given back?

ME: yes, that’s what ‘they’ say. And they’re also wrong about saying “given back,” as if it was intended to go to people who had control over it before.

We take a brief detour through the history of  the last few hundreds years of control of this area, beginning with the Ottoman Empire and then the British Mandate, and then the slicing up of what was promised for the Jewish State so that the different Arab families could be rewarded with their own countries, and then the refusal to accept the final Arab state if it also meant there would be a Jewish state.

And then back to this being the “West Bank.”

MOM: But how can this be the “West Bank?”

ME: You mean, because the people and the houses and the stores look just like they do everywhere else, including in Florida (where mom lives)? Mom, this is what they call a “settlement.” We’re all “settlers” here.

ME: It’s because the media only shows pictures of people who look crazed or violent or both. And the descriptions they connect with what they call “settlers” conjure up images of people foaming at the mouth and walking around with machetes for chopping down Arabs’ olive trees.

MOM: But this (she points around the neighborhood) isn’t what anyone thinks of when they think of the West Bank. When I hear those words, I think of makeshift ramshackle houses and people who…well, people who look nothing like the people around here. Really, this looks like the communities in Florida.

ME: Well, you should start telling all your friends. All those Jews who are proudly Jewish, but who think that the “settlements” are a problem. 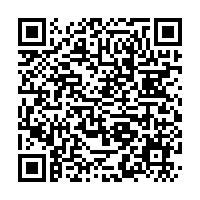