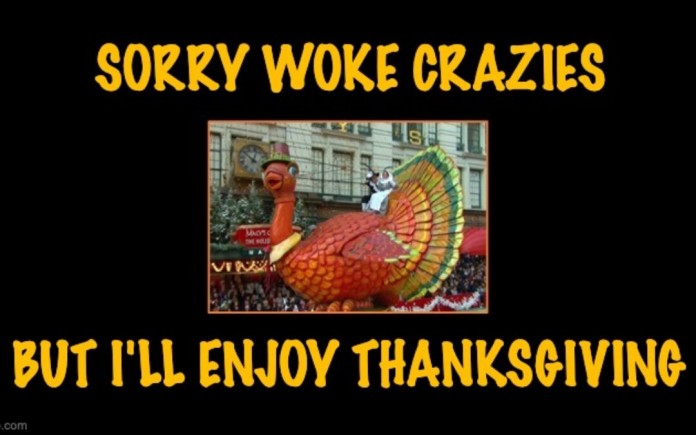 The Pilgrims celebrated the “First Thanksgiving” after their first harvest in the New World in October 1621. This feast lasted three days, and—as accounted by attendee Edward Winslow, it was attended by 90 Native Americans and 53 Pilgrims.


Woke America, however, tells us not to enjoy the day. They say Thanksgiving is a bad day, a celebration of genocide. However, some Woke people believe we should have kept Evacuation Day because Thanksgiving is inherently racist and evil.

In 2021 the Philadelphia Tribune provided a great example of Woke thinking about Thanksgiving:

Tragically, those trusting red men, women, and children had no idea that the unimaginable hell of widespread death and massive land robbery would soon follow.

When the Pilgrims arrived on the Mayflower in 1620, they didn’t bring thanks. They didn’t even give thanks. Instead, they brought racist genocide and gave nothing.

And they eventually succeeded in mass killing and mass land robbery not because they were smarter or stronger but because they were sadistically evil racists who initiated the use of a weapon of mass destruction that previously had been unheard of on this land.

Come on! Thanksgiving is a great holiday! It has many elements beginning with the spiritual part of recognizing all the things one should be thankful for. Face it, how can one not enjoy a day spent with family (except when one is the only conservative in the family and the others talk politics). It’s also a day one can watch a parade with giant character balloons (on DVR because at 9am and on a day off, who doesn’t like to sleep really late).

Deep in the heart of Wokeism, America’s Universities, young minds are taught Thanksgiving is bad. In 2020 College Fix  gave an example:

An assistant professor of anthropology at the Indiana University of Pennsylvania recently talked to students about how to “decolonize” their Thanksgiving, arguing that the traditional pilgrims and Indians story is a false narrative that perpetuates harm and racism.

Ironically the name of the assistant professor with no respect for Thanksgiving is Abigail Adams, the same name as the wife of our founding father and second president, John Adams.

She contends “unlearning some of the myths that we’ve learned about Thanksgiving” is essential because “they continue to perpetuate harm and misinformation about native people and continue to keep native people of the past… [so that they’re] not seen as real, contemporary people.”

Maybe Abigail spoke about Woke politics during Thanksgiving to ruin the holiday so her family doesn’t invite her anymore.

“we have to acknowledge during Thanksgiving that we have inherited a land that is not rightfully ours because it was never ceded. It was essentially stolen from indigenous people.”

“This isn’t just a conversation about us getting the Thanksgiving story right,” she said. “This is a story about us acknowledging contemporary Native American people and to acknowledge that they also continue to suffer ongoing colonialism.”

Abby’s Wokeism does make her seem like she wants to ruin a great holiday. Sometimes she does have a sense of humor that gave her the opportunity to play a role in a famous movie. She even got to do a scene with one fantastic actor, the late great Marty Feldman. 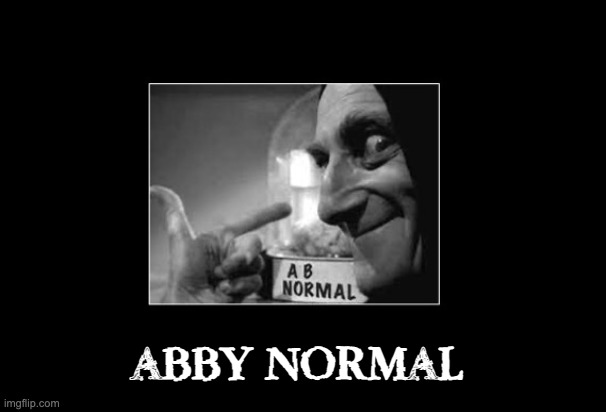 On Thanksgiving, most  NFL  fans enjoy TWO football games. This gives one group the right to hate the holiday NY Jets fans. Jets fans are still having nightmares about the infamous butt fumble game on Thanksgiving 2012. Quarterback Mark Sanchez fumbled the football and his head into offensive lineman Brandon Moore’s poop chute in that game.

That play ruined the game, Sanchez’s career, and the 2012 season. It also cursed the team. In the ten years since that revolting play, the NY Jets have only won 57 out of 161 games, a winning percentage of .354.

Look, I do not dispute that Native American tribes were screwed in this country. I have no problem making a national holiday celebrating the many Native American contributions to America and reminding people how they were treated. Two states, California and Nevada, already celebrate Native American day-petition congress to take it national. I would even support petitioning congress to make it a major holiday.

But make sure to tell Woke Americans—keep your grubby Woke hands off of Thanksgiving (and stay away from Columbus Day also). There are plenty of open days to stick an indigenous people’s holiday. BTW my birthday is off-limits also.

This coming Thursday and every fourth Thursday of November in the future.  Be thankful for all the blessings you’ve had in your life.  That includes another concept the Woke people hate. You are living in the best damn country in the world.

And to celebrate, hang out with family (without talking politics), watch football (if you’re not a Jets fan), and stuff yourself with turkey, stuffing, and cranberry sauce. After stuffing yourself, like millions of other Americans, take a power nap thanks to the tryptophan in the turkey you ate.

So shove the wokeism in the same general area where former NY Jets quarterback Mark Sanchez fumbled the ball, and have a wonderful Thanksgiving.

WARNING:  when you eat plenty of turkey, you absorb much tryptophan. Therefore wait an hour before driving or operating heavy equipment.