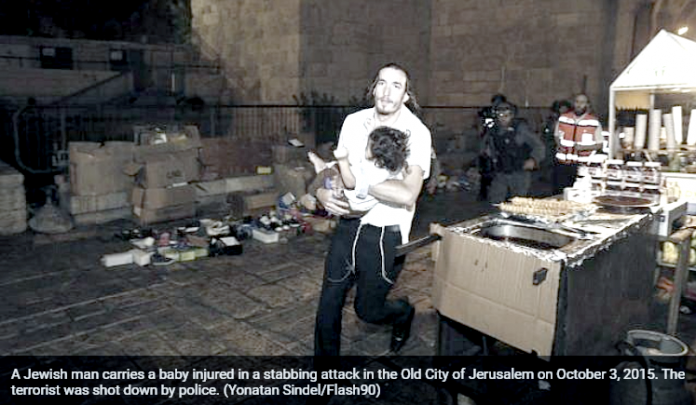 We’re thinking back to the string of Arab-on-Israeli knifing attacks that embittered so many lives in this part of the world five/six years ago.

One of those, known as the Lions Gate stabbings was a murderous attack on Aaron and Odell Benita (also reported as Bennett) and their two small children in strollers. They were on their way to the Kotel – the Western Wall – to pray.
We wrote about the awful events more or less in real time for our blog: “03-Oct-15: Arab violence escalates in Jerusalem: Multiple stabbings in Old City tonight“.
In its coverage, the New York Times [“Survivor of Jerusalem Stabbing Recounts Attack on Her Family”] quoted the young mother and wife describing how she was:

running down an alley in the Old City of Jerusalem with a knife stuck in the base of her neck, desperately seeking help. And most vividly, she described the cruel and mocking reactions she said she met from shopkeepers and passers-by. “I screamed, I begged for aid,” Mrs. Bennett, 22, an ultra-Orthodox Jewish mother of two, said in an interview on Tuesday from her hospital bed, where she was recovering from multiple stab wounds. “They stood chatting and laughing — they spat at me,” she said of the Palestinians in the alley. One man continued drinking cola out of a can, she said; others shook her off when she tried to hold onto them to lift herself off the ground. “I was looking for one glimmer of mercy in their eyes,” she said in a weak voice.

Horrifying. Almost beyond belief. There was no mercy to be found there that day.
The assailant was a kid of nineteen who was shot dead in the act by fast-moving – though not fast enough – Israeli security personnel. That knifer ands his family have gotten an obscene amount of sympathy, attention and money in the years that have passed.

The two Israeli men who were killed Saturday evening in a terror attack in Jerusalem’s Old City were named by police as Nehemia Lavi, 41, and Aharon Banita, 22. The two died of their wounds shortly after being stabbed in Jerusalem’s Old City by a Palestinian terrorist. Banita’s wife was in serious condition and their two-year-old baby was lightly wounded. She was taken to Hadassah Hospital Ein Kerem and was undergoing surgery. The toddler was taken to Shaare Zedek Medical Center for treatment where he remained in stable condition. Lavi, a Jerusalem resident, leaves behind a wife and seven children. A rabbi at the Old City’s Ateret Cohanim yeshiva who lived nearby, he had rushed to the scene when he heard screaming in the street. [Times of Israel, October 3, 2015]

There’s news today of what happened after those tragic, savage events:

Palestinian Authority President Mahmoud Abbas on Sunday ordered that the family of a Palestinian terrorist who murdered two Israelis be paid more than $40,000 and be given new housing, the Kan public broadcaster reported.

Ramallah Governor Laila Ghannam, an Abbas appointee, met with the family of Muhannad Halabi and gave them some 30,000 Jordanian Dinars  ($42,000), reportedly to help them cover housing costs since their home was destroyed by the IDF following the killings, Kan said.

Ghannam also told the family that Abbas had instructed his security services to help them find permanent housing. Home demolitions are a controversial policy that the IDF says helps deter future terror attacks.

The payments are the first high-profile payments to terrorist families since the Biden administration took office, despite claims that the Palestinians were willing to rethink the controversial policy as part of an effort to improve relations with Washington.

Halabi killed two Israelis, Rabbi Nehemiah Lavi and Aharon Banita, and injured Banita’s wife, Adele, and their 2-year-old son in a stabbing attack in the Old City of Jerusalem on October 3, 2015.

The murderer’s sister claims that a sum of 130,000 Jordanian dinars (about US$183,359) was donated at some point to the murderer’s family. This munificent gift put them in a position to acquire a replacement home.
But this being the Palestinian Authority, after various ‘deductions’ (evidently to benefit other worthy “martyrs”) had been applied to the cash, what they received was a mere 100,000 dinars – not enough to complete the purchase.
The vendors – the Arab owners selling the home but not yet paid – to the Muhannad Halabi’s bereaved family sued to enforce the contract of sale, putting the Halabi people into a squeeze.
At that point, renowned philanthropist and generous-hearted arch-terrorist Mahmoud Abbas, president-for-life of the Palestinian Authority, stepped up and provided the bridge funding in the form of a gift of 30,000 dinars. That allowed the murderer’s family to complete the purchase and for the incentive to fresh acts of murder to be publicized to a willing audience of Palestinian Arabs who gobble up just this sort of sociopathic gesture.
(The source for the narrative quoted by PMW is material broadcast on the ”Gaza” YouTube channel on May 29, 2021.)
* * *

This isn’t the first time the despotic Palestinian Authority has honored the memory of that same cherished murdering knifer. Nearly six years ago, we wrote here [“28-Oct-15: The Pal Arab passion for knife attacks isn’t just for social media: they sincerely mean to kill“] that

As the Jerusalem Post reports, the Palestinian Authority controlled by Mahmoud Abbas has just decided to honor Muhannad Halabi [the thug whose family has just been awarded the astronomical sum we reported above] by naming a street after him. Halabi is the 19-year-old murderer of two Jews killed close to the Old City’s Lion’s Gate on October 3, 2015 in a stabbing and shooting “operation” that took the lives of Rabbi Nehemiah Lavi and Aharon Benita and seriously injured Benita’s wife, Adele, and their two-year-old son.

The assailant was shot dead by police at the scene. Palestinian Media Watch reported several days ago that the Palestinian Bar Association has already grotesquely bestowed an honorary law degree on the deceased stabber/shooter/attacker. Now the municipality of Surda/Abu Qash, in the suburbs of Ramallah, will name a street for him “to emphasize the national role played by Palestinian municipalities.”

It’s also not the first time “Ramallah Governor Laila Ghannam“, who handed the Pay to Slay prize to the killer’s family, has played a key role in the nurturing of fresh, young killers in Palestinian Arab society.

We wrote about her eight years ago [“14-Jun-13: When the murderers go free, what does it really do to you?“]

The despicable Abdullah Barghouti, convicted on 67 separate counts of murder, was honoured first by means of an official “solidarity” visit to his family’s home. The PA Minister of Prisoners’ Affairs, Issa Karake, led the honour parade, accompanied the District Governor of Ramallah, Laila Ghannam. Then the PA’s tightly controlled official television channel arrived and recorded a video homage to Barghouti, including interviews with proud family members.

Here’s how this disgraceful terror-embracing public official is profiled on a European Union website:

Dr. Laila Ghannam (ليلى غنام) has been the governor of Ramallah and al-Bireh since 2014. From 2008 until 2014 she was member of Fatah’s leadership committee for the governorate. Ghannam was previously a lecturer at al-Quds University (Abu Dis) and chairwoman of the Wattan Center for Women between 2005 and 2007.

About the despicable Kuwaiti mass-murderer Barghouti who remains imprisoned for now and who made the exploding guitar case that destroyed the Sbarro pizzeria where our child was murdered in August 2001, see “21-Jun-13: In dark corners, remorseless killer of 66 innocents is called ‘administrative detainee’ and ‘captive’” and “01-Jul-13: 66 acts of murder make him a hero in parts of the Arab world. What does this tell us about parts of the Arab world?“
* * *
Don’t let anyone tell you differently: money is a key enabler in the Palestinian Arab descent into the horrors exemplified by what Abbas. Ghannam and the now-deceased knifer Halabi did.
The Mahmoud Abbas regime can’t function without massive doses of aid. Abbas can’t function, his ‘Pay to Slay’ scheme can’t function, Ghannam’s municipality can’t function, the parents of Halabi can’t function. That flow of foreign gifts – cash in the billions of dollars each year – is what allows the scandalous failed PA regime to keep the lights on.
Who pays? We’re preparing a blog post that reviews the cast of givers (there’s some data here) but of one thing we can be certain and so should you: If you pay taxes in a European Union country, in the United States, in the United Kingdom, you are certainly part of the problem even if you don’t realize it yet. 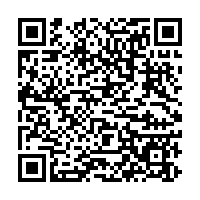