“Certainly not. This is not required, and we will not recognize Israel … I declare this clearly and in a satellite channel broadcast: ‘My friends, Hamas, you should not recognize Israel, you are not required to...We in the Fatah Movement have not changed our position” (Fatah-run Awdah TV, August 23, 2017, translation in Palestinian Media Watch (PMW) bulletin, ‘Fatah Spokesman: Fatah will never recognize Israel,’ September 18, 2017).


Fatah regularly declares to Palestinian Arabs that it does not recognize Israel’s existence or right to exist. Fatah and the PA regularly teach Palestinian children to see all Israeli cities such as Jaffa and Haifa as “occupied” Palestinian cities that will eventually come under Palestinian Arab sovereignty.

The Fatah Constitution, drafted in 1964, never since amended, calls for the “complete liberation of Palestine, and eradication of Zionist economic, political, military and cultural existence” (Article 12) and for terrorism as “a strategy and not a tactic … this struggle will not cease unless the Zionist state is demolished” (Article 19).

In the Fatah-controlled PA, PA-salaried clerics calls for the murder of Jews; PA publications glorify terrorism; PA school curricula inculcates terrorism and ‘martyrdom’ as a national and religious duty; PA maps do not show a country called ‘Israel.’

ZOA National President Morton A. Klein said, “Fatah, since its founding in the mid-1960s, has prided itself on being a pioneer of Palestinian Arab terrorism against Israel.

“This is not a movement that has ever repudiated, revised or modified its Arab supremacist program of denying Jewish peoplehood, destroying Israel and replacing it with an Arab-dominated regime.

“The Fatah Charter is fixated on diverse means of destroying Israel and has never been supplanted or superseded by another, reformist document that rejects these positions.

“Given the unchanging realities, the idea that Mahmoud Abbas and his Fatah-dominated PA will make peace with Israel is simply unrealistic.

“President Trump will find that Abbas and the PA will reject any form of recognition of Israel and any type of solution that does not encompass Israel’s ultimate elimination.” 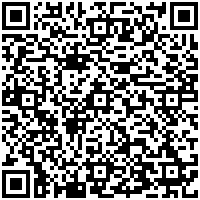