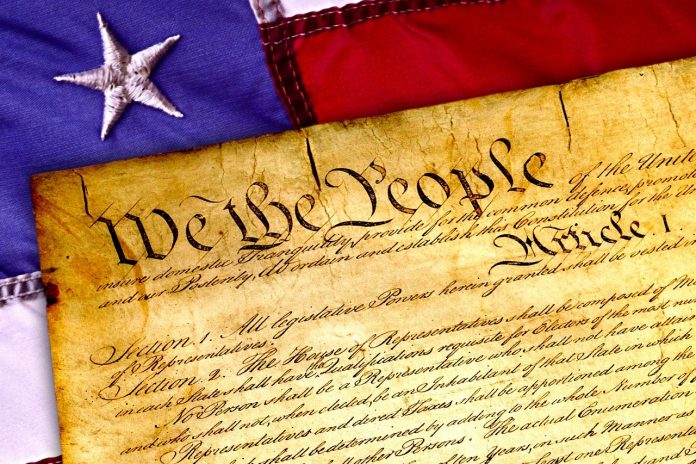 It isn’t worth spending a whole lot of time on this.  The weaselly intent of President Biden’s words is self-evident.  (He uttered them in the course of announcing his executive order on gun restrictions.)

Some things are absolute.  Biden went on to put up the usual “can’t yell ‘Fire!’ in a crowded theater” example, but the usual example has its usual impact.  It illustrates that exceptions to the absolutes of the Constitution must be for cause.  You’re courting sanction if there isn’t a fire — but the meaning of 1A isn’t even about that; it’s about the government failing in respect of cause and due process.  Can federal employees be prohibited by law from saying certain things in specific situations (e.g., blabbing state secrets)?  Of course they can.  But that restriction on speech is subject to cause and due process, as are libel, slander, child pornography, and yelling “Fire!” in a crowded theater.

As regards the 2A, there are already ways to deny firearms to people who shouldn’t be trusted to keep and bear arms — but there must be proper cause (“proper” typically, and rightfully, being the province of the legislature), and a due process for showing it.  The cause relates to the individual and his circumstances.

Biden wants to bypass this excellent framework of due process and the rule of law, and arbitrarily declare everyone in America ineligible to keep and bear arms and arms-related things he doesn’t like.  The purpose of the Bill of Rights is, in fact, to defend us against exactly that

Chipping away at the Bill of Rights was always going to lead to this.  But, hey, there’s a lot we can do, constitutional-amendment-wise, with the principle of non-absoluteness.

Dinesh D’Souza kicked things off on Thursday with a reminder that the 13th Amendment, which prohibits slavery in the United States, would then not be an absolute prohibition.

I think we could generate more interest by starting with the 16th Amendment.  Who needs to repeal the income tax amendment if we can just declare it non-absolute and subject to as many exceptions as we like?  I like excepting myself from it.  In fact, the federal government shouldn’t even know what my income is.  It has no valid need for that information if I’m exempt from being taxed on a tax-rate schedule, just because one day I say so.

So much to be done with that one.  There’s also the 17th Amendment — direct-vote election of U.S. senators — which is a bit arcane but which a lot of people see as one of the roots of our modern problems.  They have a point.  States should feel free to treat that one as non-absolute and come up with their own darn methods of choosing senators.  A target-shooting competition between the leaders of the state Republican and Democratic parties sounds like a winner to me.  There’s also freestyle wrestling between aspiring candidates, which I believe Abraham Lincoln may have done once.  Alternative possibilities might be holding a spelling bee, drag-racing, or handing each candidate a $100 bill and swearing in as the new senator the one who earns the most with it in 24 hours by repurposing used furniture.

It doesn’t stop there.  I don’t advocate this, but states where voters are willing to explore limiting suffrage — for women, for people over 18, for non-property-owners, for, well, anyone — should feel free to at least ponder and debate the matter.  A non-absolute is a non-absolute.

That pesky 14th Amendment the courts are always finding new rights in?  Non-absolute.  Go ahead, find those rights.  Enforcing them?  You and what army?

The 4th Amendment is a real buzzkill, and could do with a much more overtly non-absolute profile.  It’s hard to think of any reason, for example, why the state of, say, Texas should not just start eavesdropping on the activities of any and all federal officials when and wherever it feels like.  Just “because it’s a government” is not a good enough reason to protect feds and their personal cell phones and their kids’ social media habits from the wide-ranging eyes (or ears) of Texas.

Let the home invasions commence too.  Why should criminals have all the fun?

And don’t forget the boring, forgettable amendment with the dates and stuff in it.  Who even knows what the 20th Amendment does?  There’s not one reason on earth why we have to swear in a new POTUS and VPOTUS on 20 January, just because it’s written down somewhere.  And 3 January for a new Congress is a stupid date.  There, I said it.

We could have spared ourselves a world of heartache by deeming “20 January” non-absolute in 2021, and leaving Trump in office until more people felt right about setting a date.

Meanwhile, the Derek Chauvin trial may well be the one to make us see the upside of a non-absolute 6th Amendment.  Jury trial, shmury trial.  Just hang ’em and move on.

The possibilities are endless with this “non-absolute” finding by the POTUS.  On a serious note, we’ve been edging further and further into “non-absolute” territory for the last 100 years, which is a major reason why we’re in the mess we’re in today.  But lighten up.  There’s no end to what we can do with a non-absolute Constitution.  Let’s get this party started.